We have reached the point where the curtain sweeps across the stage once more. There was no thrilling final act this year, unlike the last, more a confusing set of non-sequiters drawled out as though by actors riddled with demons and drink.

Rather than the season ending with a standing ovation celebrating the late-doors, show-stopping thrills, as had been the case at this point last year, this season finished in such as a way as to warrant stifled coughs, shoulders shrugging back into overcoats and seats tipping up with a gentle tap.

Given both ourselves and Staines had nothing to play for in this fixture, it is perhaps unsurprising that the game was as featureless as the Arctic tundra, and as flat and flimsy as an over-sized balsa wood oblong. Actually that is unfair, there were two goals after all, Manny Williams scoring in the first half for us when he eventually untangled the ball from beneath his feet, pirouetting in the six yard box and slotting beneath the keeper. 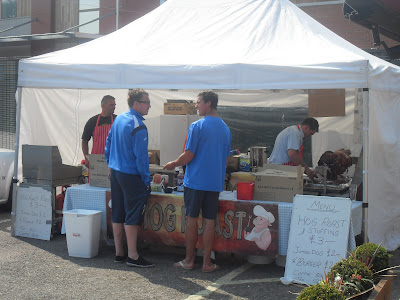 Also, it would be fair to say that Staines’ second half equaliser by substitute Mario Quiassaca was one of the better goals we’ve seen at Westleigh Park this season, his first time turn and volley from just outside the box flying into the top corner and being greeted with applause all around the ground. See how magnanimous we Hawks can be? Well we are when there’s so little riding on a game it’s like a flat-season charger that’s jettisoned the jockey, vaulted the perimeter wall and spent the remainder of the race wandering around the car-park.

Still, that’s not to say we didn’t enjoy ourselves, a traditional last day early start in Havant town, the sun beating down and a hog roasting outside the bar (our injured players’ making a eager beeline for it – see Sam Pearce and Aaron Howe above). Behind the goal, talk was largely of next season’s new kit which will not only feature a change in sponsor, but a change in colour, the all white business being too much of a strain on the club’s Persil fund. 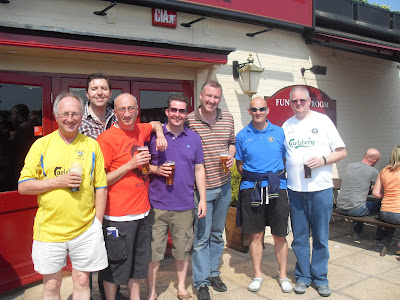 What of our season though? Well, there was a run to the FA Cup 1st Round. Even our hardest of hardcore supporters might need reminding of that, as once there we departed the competition meekly at the hands of Conference North side Droylsden. Given our past history we have no room for complaint but this was certainly the least memorable of our six visits to the Cup rounds proper. The FA Trophy and Hampshire Senior Cup would also provide little by way of highlight.

In mid-November we briefly hit the heady heights of 8th in the Conference South, and that was to be our peak; making a mole-hill out of a potential mountain. This in a season where we went in with high confidence based on that terrific final month last year aligned with decent pre-season results against professional sides. Even until mid-March some were clinging onto the idea that the play-offs were within reach, but this was an illusion created by our having a number of games in hand. Gotta win ‘em first, John. 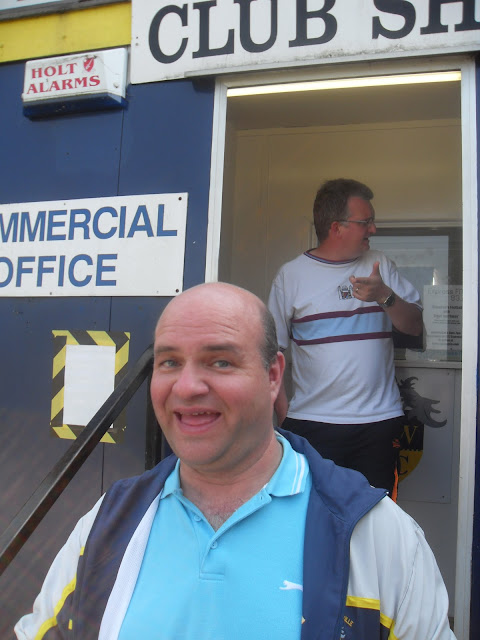 This backlog had largely been created by a series of unfortunately timed events (hard winter + drain collapse + the biggest fungal build up since the world athlete’s foot championships) which meant a great many games were frozen or rained off, and left our pitch in need of significant attention.

If you want seasonal highlights one is forced to look at the bizarre rather than the brilliant. There was the game against Boreham Wood in January where we were allowed to ‘walk one in’ after a sporting return of the ball following an injury flew into the net, then 6 weeks later, we relied upon the unexpected appearance on the field of a man wearing a curly wig and an over-shoulder banana-hammock to collect three points against Dorchester. 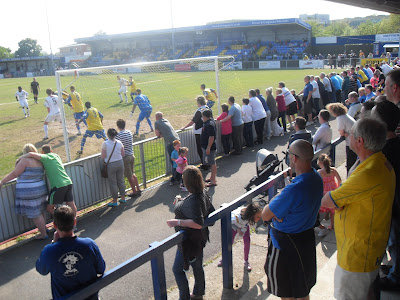 However it would be unfair to say we’ve not seen some decent goals, on the opening day at Dartford Wes Fogden curled in a shot from 25 yards, while Muzzy Tiryaki clearly enjoyed the visits of Dorchester, hammering in an Exocet against them in the Cup, then fizzing in an arrow that caught their keeper napping at the near post during the league game. Indeed Dorchester themselves scored an up n’ under corker that night but both were overshadowed by what has become known as the ‘Borat intervention’.

We can also point to Wes Fogden collecting the supporters’ player-of-the-season trophy for a second year in a row as an indication that if anyone is responsible for a season that made like a poorly ventilated wet-room in the dampness of its squib, it is not our full-back bamboozling hero. Jake Newton’s performances at right back were also deemed to be in the ‘very good’ bracket, and not just by us, his team-mates selecting him as their player-of-the-year. Captain Ian Simpemba also remains such a lion-like figure that after leading the post-match applause to us for our support (see below), he was thrown a fresh Wildebeest carcass by the directors as a sign of their esteem.

So, for all the shrugging, I’m not convinced wholesale change is required on the field for us to improve next year. Certainly the performances by our first choice striking duo of Mustafa Tiryaki and Manny Williams left a lot to be desired, whilst this has probably been a season too many for Ian Selley at this level, which is sad to say after the former Arsenal man was the catalyst for our turnaround last year. Indeed, all three were immense in the previous campaign, but did not meet expectation this year, Muzzy’s effort levels falling off dramatically after reports of Brighton sniffing around him. I don’t imagine they’re still interested. In addition Sammy Igoe took a long while to get into a sufficient rhythm at this level, only really turning on the style in the month of March. 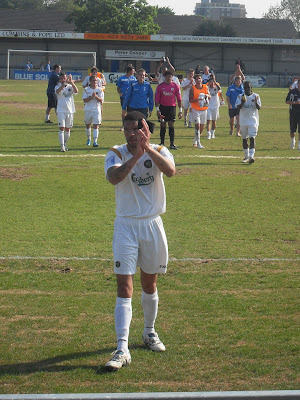 After March we had nothing to play for and if we weren’t able to gauge this from the league table then we certainly could from the player’s body language through April, which ranged from ‘mentally flicking through the Thomas Cook brochure’ at one end of the scale to ‘dead man walking’ at the other.

Of course, while this all sounds overcast, if the worst thing we can say is that we’ve had arguably our most ‘average’ season to date, in a year which has seen clubs like Ilkeston Town, Leyton and Windsor & Eton go to the wall, then to start booking our therapists in attempting to delete our sonorous despair is to go a touch overboard.

Let us then take this summer to retreat and regroup. I can genuinely say I have no idea what the story for the next 12 months will be, but I’m hoping that more consistent performances with a greater attacking bite will feature in the narrative.
Posted by skif at 5:46 pm

Thanks for another entertaining season of posts. It's always a pleasure reading them!

Thanks very much Andrew

My support of the male Hawks is sadly having to go on ice for the foreseeable future, so could you please change my description from 'another Hawk scribe' to 'our Hawks Ladies correspondent' or something similar? Many thanks.

Have a great summer!