There’s been a lot of talk of belief lately. Three wins on the bounce will do that. However, the performances in those games, combined with a number of players being injured or ‘out of form’ and a stone cold bastard of a schedule means my rosey-lensed promotion spectacles remain in the cupboard for now, although happily my sturdy ‘it’s-raining-relegation’ umbrella is staying put with it.

Naturally, this defeat did nothing to change this state of affairs. In fairness it was a decent game of football (which has been a rare treat recently) with both teams missing a bag-load of chances but although it featured a more consistent 90 minutes from our boys than in those last three won games, there is no doubt in my mind that, here, the better team took the points. A strong backbone and tenacious spirit allowing flair to spark; this is what I would expect of a Liam Daish side when in good order. 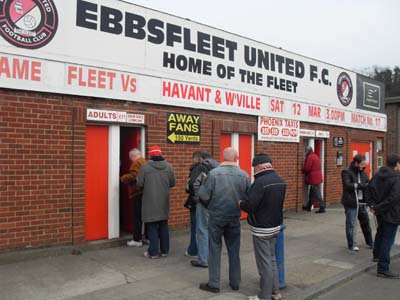 Yet it certainly looked promising for us six minutes in as Wes Fogden, despite being about three feet shorter than his marker, climbed up to get sufficient headed purchase on a Steve Ramsay cross for the ball to bobble past Ebbsfleet keeper Preston Edwards.

The home side dominated the remainder of the half though, and had their equaliser twenty minutes later as a ball over the top of defence caught Ian Simpemba in the midst of the kind of U-turn you would usually associate with an articulated lorry trapped in a cul-de-sac. Calum Willock barrelled through to slot calmly past Nathan Ashmore.

In the second half, chances came at both ends but only one was to be converted. We certainly had three credible opportunities for which the finishing did not quite work out. Wes Fogden from the edge of the six yard box met a cracking cross a bit too heavily and the ball ballooned over the bar, whilst after coming on as sub Guiseppe Sole almost caught out keeper Edwards who had come out a long way but Gez’s long-range up-and-under attempt failed at the ‘under’ stage, dropping onto the roof of the net. 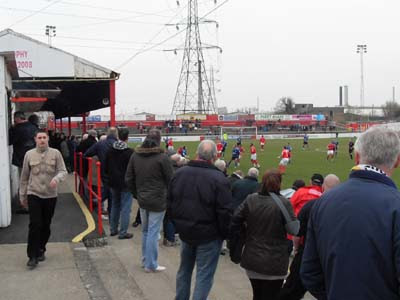 Former Portsmouth and Bournemouth man Sammy Igoe, and his between-the-wars coiffure, are starting to look much more comfortable down here in the tinpot leagues, yet he probably missed the best chance of the lot. Unmarked at the back post, Sammy met a cross with a header as thick as a remedial school rhino yet whilst this caused swelling, it was of our disbelief rather than the back of the net, the ball improbably crashing into the advertising boards.

On the hour, Ebbsfleet took the lead with a chance almost identical to the one Wes had hoofed over the bar for us, but Willock was able to keep his finish nice, tidy and netted. 2-1 and that was the way it was to remain.

Another setback then and given there are likely to be more here and there, I’d be astonished if we finished anywhere other than an unspectacular, mildly disappointing mid-table berth. We are currently 11th and have hovered around this general area for months, like a fly choosing its moment to settle on a stale dog log. 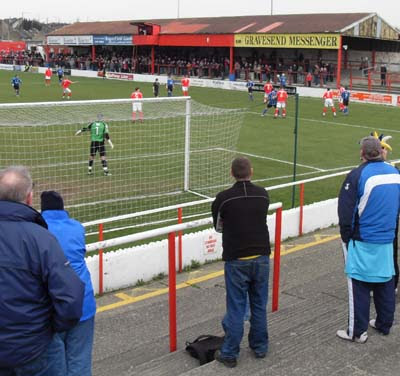 There are parallels with last season that we can make though. After this weekend in 2010, we had ten games still to play and were in 12th place. We would only lose the first of those ten games, winning seven, drawing two, scoring twenty-five goals and ending up 6th, just one point outside the play-offs.

As it stands we still have fourteen games to play this season and only five of those against teams currently in the top ten. Our striking heroes Manny Williams and Mustafa Tiryaki have blown cold far more often than hot in the last few months, but Guiseppe Sole has filled some of that void and winger Wes Fogden has top-scored thus far with 15 goals in all competitions, including the opener here.

So, perhaps I am wrong to be sad and weary, and believe that all hope is gone, especially with wins like last Mondays, helped by a man with near nothing on*.

*apologies to Adrian Mitchell
Posted by skif at 9:12 pm