This bit is why we non-league types love the FA Cup. This bit. Right now. Admittedly this paragraph only really works if you happen to be reading over my shoulder as I type, but let’s pretend you are and that it’s quarter to midnight on Saturday 23rd October. Ready? Good. So, like I say, it’s this bit. The bit between 4th Qualifying Round victory, and the numbered ball relating to us being drawn out of the 1st Round hat the following afternoon.

It is within these good times pro tem, this exquisite interim, where possibility rules. These are the precious hours of the what-if’s, the maybe-it’ll-be’s and, to paraphrase Brian Wilson, the wouldn’t-it-be-nice-if-we-drew-Sheffield-Wednesday-away-before-we’re-too-much-older’s. 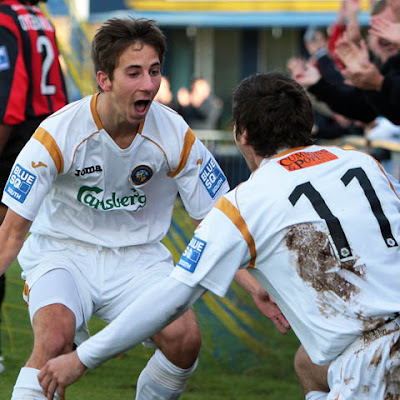 The optimists reel off all the league clubs they’d love to visit, while the pessimists will say, “dunno what you’re getting excited about Ted, we’ll be home to bloody Vauxhall Motors or something.” The seasoned beano-ites will be hoping for the most ridiculously long trip possible, while the homebirds will hope Hampshire Police don’t force us to play any potentially troubling tie at Fratton Park. Thankfully Millwall have left League One behind which rules out a repeat of that one. Then again, there is always the potential of getting Southampton. Which would be flippin’ ‘orrid, John.

Yet, whilst getting lost in the clouds of possibility, we must not forget the journeys that bring us to this point. You could argue we have been fortunate, what with the three home draws on the trot this year. Yet those games still needed to be gone and won. That the latest opposition in that run came from a higher division should also be duly noted. “Not bad for a village team” sang their supporters and Histon have indeed come a long way in the last few years, however whilst this result coming not really as a shock reflects their status as one of the Conference National’s less celebrated names, it also says a lot about how much our outlook and expectations have changed and how far our club has come.

FA Cup scalp taking. It being another in a long line of scalp takings. This posting is building nicely to my being able to wax nostalgic about our previous in this area. The appeal of banging on about it once more is indeed immense. Indeed, the temptation to crow is so great that I’ve started to grow black feathers and a beak. However I think, by now, you’ve heard it all before.

So, let me just talk about today, a relatively untroubled win over a Conference National side. We were able to settle relatively quickly, Wes Fogden scoring after only three minutes. This wasn’t a Wes goal of legend, of swashbuckling impudence and dandy-ish flair, but he was in the right place at the right time, after an excellent run and cross from Steve Ramsay, to guide the ball in. The ball hit the keeper’s ribs en route, and like a racehorse clipping the final fence with the tips of its hooves, flailed a bit before collapsing over the finish line.

The second was scored just about an hour later. The Histon defence was opened up like a tin of Spam and Mustafa Tiryaki was the little key thing peeling away their resolve. Once Muzzy powers through a defence like this and looks up at the trembling keeper, like a lion watching the movements of a honey-glazed gazelle, there is only ever one outcome. Muz’s shots travel remorselessly hard and straight like cannonballs through the hull of a wooden ship, and so with only the bottom corner just inside the near post to aim at, that is what he hit. It is no surprise that several league clubs are sniffing around him.

As the season jogs on the more the confidence is rippling like a weightlifter’s bicep through our side. On current form, we have much to feel good about, in both league and Cup. So we can’t be too disappointed that the Cup draw has only succeeded in sending us fellow non-leaguer’s Droylsden, as in the context of our history and our season, we can go into it confident and dreaming of Round Two.