Some Cup moments are glorious, enrapturing, lip-smacking, belly-fizzing things. We know, cos we’ve had one or two. Others are like today – where the atmosphere is so flat as to hint at a frank exchange of views with a cartoon steamroller; so low-key you could use it to pad-lock a cat flap.

Still, this is often the way at the 2nd Qualifying Round stage. It is an obstacle we are expected to surmount, given that in the 2nd and 3rd Qualifying rounds we can only play teams from our level or below. It is understandable then that Cup fever, at this stage, has still to get a proper fire going.

Yet, whilst we provided banana-skins for York City, Notts County, Swansea City and, for a few short minutes, Liverpool, those magical afternoons (and evening) we are, at these stages, equally vulnerable to the lack of purchase offered by the discarded sleeves of yellow fruit. Indeed, over the years Cirencester, Chippenham, Langney Sports, Bath and Salisbury have all given us a bloody nose from the kind of uppercut that only those coming at you from a lower level can provide. 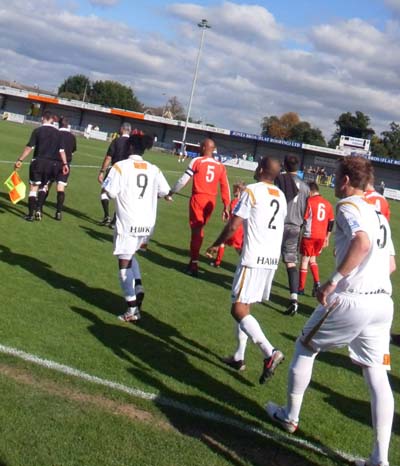 As such, Frome of the Southern League’s South & West division (two leagues below ours) could come to us in good heart, having already dispatched Willand Rovers and Ilfracombe Town to reach this stage. Indeed, a fan of the Scarf & Vest side reported on our forum in the week that we could expect 150 eager Cup enthusiasts to descend upon us from them there western hills. Instead, we played host to a smattering of pretty quiet fellas and a Cornish-separatist flag adorned with Frome Town’s web address. This might be regarded as a peculiar combination as an ensign in any case, but especially so when you factor in Frome being a market town in Somerset.

So, with not much to gee us up on-field or off in the first half, minds behind the goal wandered somewhat, moving eventually to a discussion of the merits of a variety of vegetables and pulses. Broad beans! The ayes have it. My apparently casting vote tipped a tight division in your favour. Parsnips! The jury remains out. Butter beans! Your boys took one hell of a beating.

Thankfully, the second half was a lot more lively, and so red cabbage and celeriac will have to remain on the slate for discussion another day. Good things to happen: Sammy Igoe’s commanding and evergreen performance down the right flank; the return of Ryan Woodford as a second half substitute after a horrendous amount of time out with injury; and, of course, Manny Williams’ winner.

In the 63rd minute, Muzzy Tiryaki bustled to the by-line before fiercely bouncing the ball across the touchline so that all Manny needed to do was breath on it for the ball to hit the net. Instead of giving it a good old blow though, Manny decided to use his forehead.

After that, the game should probably have been wrapped up with further goal action but, in truth, whilst Frome stood proudly firm, their threat was negligible, and our required result has been achieved, albeit without much in the way of style.

Hi. Sorry for posting this here but I couldn't find any contact details.

Could you ping me a quick email to ian #at earlybath #dot co.uk when you get a minute.

"the atmosphere is so flat as to hint at a frank exchange of views with a cartoon steamroller; so low-key you could use it to pad-lock a cat flap."

This sort of genius is why I read dub steps :D Superb.

Very kind of you to say so, Nick.