A new season brings with it the need to rummage around in the cupboard and dust off a few items ready for the coming campaign. In my case that would be my Saturday afternoon must haves i.e. replica shirt, scarf and the use of the phrase “I’d rip your arm off for a point right now.”

This phrase made its appearance most weeks last season, to the point of a custom-made t-shirt being considered so that I just might turn up on the terrace and point at its insignia rather than waste my breath ahead of performances that, up to late January, ranged only from poor to dreadful.

However, Shaun Gale survived this continuation of the previous season’s doldrums and oversaw a startling turnaround that took us from relegation angst to finishing one place and a single point away from the play-offs in only three months. The combination of these performances along with the fact that we kept pretty much the entire squad together over the summer, meant giddiness was able to jimmy itself in through the small bathroom window of my expectation; a window I could have sworn I painted shut for my own good a couple of seasons back.

Attempts to forcibly remove my overexcitement and restore the usual judicious and realistic order weren’t helped when we announced the signing of Sammy Igoe; a former Portsmouth, Reading and Swindon player that turned down offers from clubs in higher divisions as he didn’t want to up his roots from the south’s nutritious soils. With him joining a European Cup Winners Cup medal holder (Ian Selley, ex-Arsenal) and two handsomely bright young things (Bobby Hopkinson and Wes Fogden) in midfield, I must admit I went a little Starship on it, in that it seemed, to me, that nothing was, ahem, gonna stop us now. 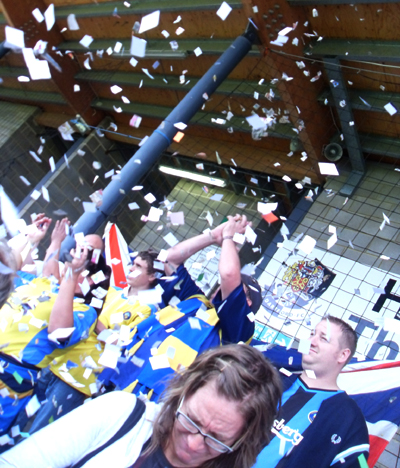 Further slaps upside the chops of rationality came during our performances in a pre-season tournament held in the west country where we tore a hole in Championship side Doncaster Rovers the size of five goals without reply. It was a very strong side that they’d put out for the game but, given the amount of protest amongst the League clubs in the tournament about the fact they could only use three subs per game, we might concede that they might not have given the occasion the full wallop.

We lost to 2-1 to Shrewsbury Town in a tight semi-final but as they, like Doncaster, couldn’t really be arsed with it, it was left to us to face Premiership side Blackpool in a friendly the next day in lieu of a final, the tangerine troops having been awarded the competition’s trophy by default. We took a 2-0 lead over Ian Holloway’s men but eventually lost 3-2. Still, a week very well spent it appeared.

However as we got closer to the season beginning, with an emergency loan keeper required last minute thanks to suspensions and thumb dislocations on the part of our incumbents, and with our squad looking possibly a little light, a level-head managed to just about subdue the giddy.

Injuries, and the avoidance of, may be a big factor in our successes and failures this year. For instance, Manny Williams was astonishing at the start of last year, scoring eleven goals in our first ten games. However, after that, he spent a large part of the campaign, and the entire close season, with his arm down the back of the sofa trying to locate his mislaid fitness. It appears that, like a dusty penny lost in the lining of a fur-lined hooded anorak, that whenever he manages to stretch and get a fingertip on it, he only succeeds in pushing it further away. You could say exactly the same of young centre-half Ryan Woodford, whilst midfield terrier Shaun Wilkinson playing career remains in the balance after a badly broken ankle. 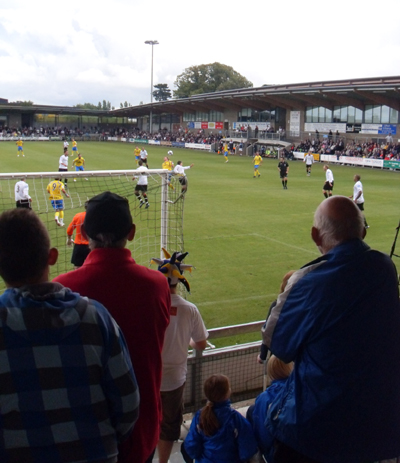 So, with that in mind, the fact we’d won only 2 of the 12 opening fixtures we’ve had since the club’s formation in 1998 and Dartford’s status as a potential title-winner having romped the Isthmian League last year, you can perhaps understand why, despite all the positive aspects of the recent months, I’d decided to bring the “…take a point…” phrase out of an all too brief retirement.

Yet, as they say, be careful what you wish for, as you just might get it. While a point was an agreeable return from our endeavours at Princes Park, for a few short minutes it looked as though the entire contents of the opening day’s biscuit tin would be ours.

Not that it looked this way at all after twenty-six minutes. At this point, Dartford were one goal up and we appeared a bit dazed to the fact that the season had actually started. From that point on, we were the better side and yet it required a soft penalty, for a high-on-the-arm hand-ball, on the stroke of half time to bring us back on level terms. Bobby Hopkinson stepped up, sent keeper Andrew Young the wrong way and celebrated by standing stock still whilst peacock-feathering his palms towards us (see below); a hubristic shrug which said simply, “yeah, that’s right, that’s what the Hopkinson can do for you people.”

In the second half we once again took a while to get going but after that we began to pile on the pressure, most notably when an audacious cross-cum-shot from Muzzy Tiryaki hit the bar. Indeed, Muzzy was incredible throughout the game, holding the ball up as the lone front man brilliantly. His relentless work-rate was particularly note-worthy for a man currently observing Ramadan and thus probably rumbling heavy in the tum-tum given the absence of a lunchtime Twix. So, Bobby or Muz for man of the match, for me anyway. 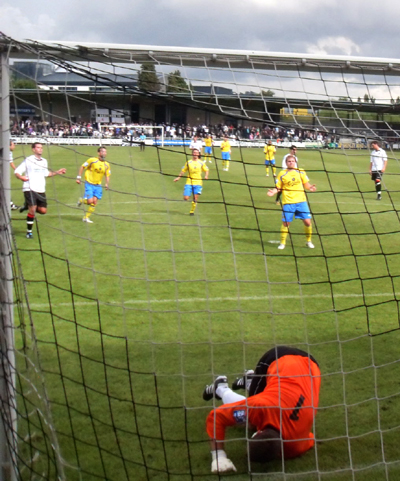 Over the course of last season, you could usually pick Wes Fogden as being our man of the match even before kick-off, but he couldn’t have it today because, owing to a knock in pre-season, he only came off the bench mid-way through the second half. However in the absence of that accolade he decided, instead, to throw an early hat into the goal-of-the-season ring, curling in a shot from about 25 yards out with three minutes left on the clock; a shot so peachy and potent you could have wrung a magnum’s worth of Archers schnapps out of it.

Wes, not to mention Bobby, Muzzy and Ian Simpemba, are clearly looking to start this season as they finished the last, all putting in excellent performances. Perhaps Sammy Igoe and Steve Ramsay (the player you may remember from these pages as Steve Walker, until his visit to the deed-poll office this summer) could have shown a little more, but these are early days and we are clearly not entirely comfortable with a 4-5-1 formation just yet. Fingers crossed Manny’s return will be swift, and without caveat.

Yet, however well we play in games this season, points will be dropped and mistakes will be made, and so it was until the sixth minute of injury time when Danny Harris was felled in the box allowing Ryan Hayes to stroke the equaliser past our eleventh-hour loan keeper Richard Martin who, it should be said, had a pretty assured game.

So, a good result, even if in galling circumstances. Keeping the giddy bound-and-gagged in a basement somewhere will probably remain the default position for a bit, but this was very encouraging stuff for the season ahead.
Posted by skif at 10:16 am