Meet the new year, then. Same as the old year, it appears. A 2-0 defeat and discontent continuing to rumble.

There were boo’s and “what a load of rubbish”-es, but there is still the sense of mass resignation that this is just the way things are now and nothing is likely to change. Not mass resignation in the sense of the fallout of the MPs expenses scandal, more a collective acceptance of troubling circumstances; perhaps like Zimbabwean turkeys voting for another Zanu-PF Christmas. 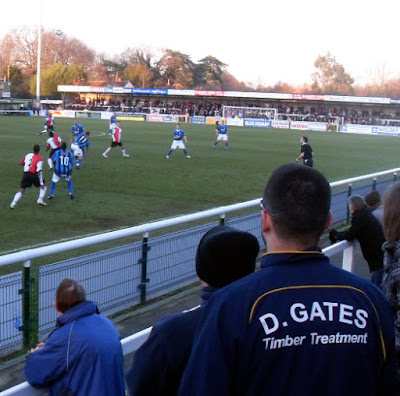 Still, that sense of lumbering futility is not a cloud without its silver-ish lining. As my London Branch colleague puts it, “ah, but the gallows humour, Skif. That’s what I turn up for” and he’s right, there’s virtually nothing that could happen that would stop me turning up to watch, it’s the company more than anything else. However the legions of Pompey supporters’ club members, who get entry to West Leigh Park as a fringe benefit, who were turning up in droves at the start of the season, are now staying away in similar numbers. An opportunity squandered, like a ballooned penalty, and speaking of which…

Our day today was perhaps best summed up by Luke Nightingale’s penalty kick (see below). Last season his best contributions came from the penalty spot – he seemed to be able to ping into the top corner at will. For this game, he sent the ball so far over the bar it was mentioned as a potential hazard to fishing vessels on that evening’s shipping forecast. 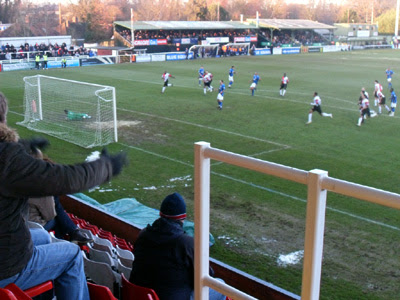 Perhaps we should have expected nothing else against a full-time side with aspirations to get back into the Conference Premier at the first time of asking. I confidently said on the train down from Waterloo for this game that “we’re too good to get mullered, however bad our football gets”. However we only have our goalkeeper Aaron Howe to thank for us not bearing witness to a humping of that degree.

After being involved in the late sending off of Woking’s Nathan Pinney in the reverse fixture last week, Aaron was subject to a significant and regular amount of derision from a section of the Woking fans, but this just seemed to inspire him to a series of a brilliant saves. However there is only so much that one man can do, particularly when there wasn’t much else going on around to support him.

It can’t be long before ‘Ivan the Terrible’ becomes how winger Ivan Forbes is addressed as standard. Today saw many an aimless run down the flank that ended with the ball being shanked into the advertising boards. And that was at best, more often than not it would just bobble there. 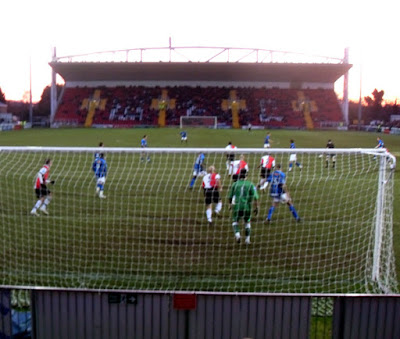 At least Woking’s new signing, Jamie Slabber, didn’t score when he came on as a substitute. That would have been the brown slurry icing on a particularly foul-tasting cake. Y’see, Jamie Slabber used to play for us. Well, I say play, it never appeared that he was quite sure what game he was playing, nor if he knew that he was playing a game at all. It seemed he had taken the decision to do as he was told, put the kit on, run out of the tunnel with the fellas dressed the same as him and busk it from there.

If that remains the case, he’d probably fit in better with our squad now than he ever did back then, as this performance was completely devoid of ideas and inspiration. Today, Woking had the blood flushing through their cerebral cortex, whereas our collective brain was floating in formaldehyde.

In a dusty jar.

In a broken cabinet.

In a museum long since closed.