Since being required to leave the wonderful Claremont Road, their home since 1926, Hendon have been getting to know Wembley FC’s Vale Farm ground for just over a year now, making themselves as comfortable as anyone ever is when borrowing someone else’s slippers. It’ll take a while yet before it genuinely feels like home, if it ever does.

Today, though, they could crack their knuckles, take a lungful and survey the entire estate as this fixture took place but a sliced ‘Ey, who’s injured keeps?’ goalkick away in the Sports Centre adjacent to Wembley FC that, in theory, handed territorial advantage to South Kilburn for this London Senior Cup tie.

Going into the game, Kilburn were 4th in the Hellenic League’s Division One East, while three levels higher, in the Isthmian Premier Division, Hendon were 18th, separated from the relegation places only thanks to a superior goal difference to Margate. When one took into account the credence given to county and regional FA competitions by more senior non-league clubs when they have their status to fight for, this game was difficult to call despite the difference in not only status, but history. 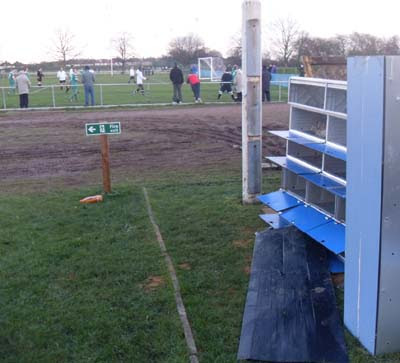 Hendon formed, as Christ Church Hampstead, in 1908, making them 97 years older than South Kilburn. The driving force behind the latter’s formation, Mick Jennings, remains in joint charge of their first team, alongside Dennis Labastide. It is to be assumed that Hendon gaffer Gary McCann was not in attendance at his club’s investiture.

Another variable to add into the mix is the more senior club “not really fancying it”. This happens in all competitions, of course, but particularly when partially cosseted semi-professionals have to knock around a ramshackle county league facility (the Havant & Waterlooville side that lost to Wessex League Bournemouth Poppies in the Hampshire Senior Cup a fortnight ago, I am very much looking at you).

So, the ground. Well, Gerrard Winstanley, leader of the 17th century political sect The Diggers, published a book in 1649 entitled The True Leveller’s Standard Advanced which, historians believe, was either about man’s right to live off the land, or an assessment of today’s pitch. If anything will grind the good out of a semi-pro’s legs, it’s a surface that makes the Cairngorms look like a relief model of an ironing board and which has pockets of sanded areas that look like they might consume the less active players in its sticky porridge. 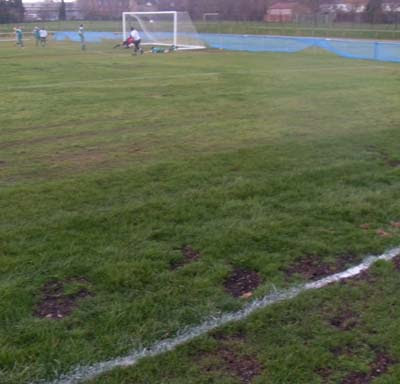 In the first few minutes of the game, it appeared that any one of the Hendon XI could be susceptible to slowly descending into the sodden shitcake, as the 1:30pm kick off (due to insufficient floodlighting) seemed to have caught them as bleary eyed as a ketamine comedown.

Six minutes in, some hopeless defending left Kilburn’s Eric Hamilton one-on-one with Hendon keeper James Reading, but the first time shot only found the keeper’s legs. Five minutes later Hamilton found himself once again in the box and his curved shot was pawed away by Reading but only as far as Eri Deda who calmly slotted the ball over the now prostrate keeper [see above].

In the twenty second minute, Hendon’s James Bent was fouled in the box and dusted himself down sufficiently to send Kilburn keeper Chris Christie the wrong way from the spot. This completed the scoring for the first half, Hendon’s territorial advantage not being turned into goals largely through a reluctance to pull the trigger after some very good build up play. 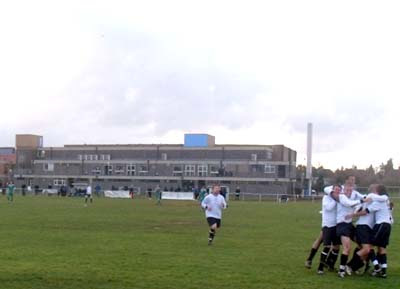 On the nearside touchline, linesman Martyn Cannon requested that a large plank of chipboard be removed from the section he was supposed to be patrolling only to discover that it was covering a large, protruding drain cover. He decided to take his chances with the drain. “This is nice and pleasant” said a Hendon sub tapping his toe against its rusty lid before contemplating the horror of a sliding tackle continuing over the touchline and over it. It was a fair point. Clearly ground grading for the Hellenic Division One East reads simply “No used hypodermics in the centre circle! No lakes of dog piss in the goalmouths! All else fine”.

Upon the churned up dirt track that separates the pitch from the leisure complex is a skip and next to it, rather than in it, lie a number of discarded locker units with their flaps gaping, making it look like an Ikea pigeon loft. Perhaps it was because of this that a number of gulls congregated above us for a while, clearly believing a heated swimming pool to trump the sea on a bitterly cold day such as this. However their agitated screeches and squawks betrayed the fact that more than one of them had forgotten to bring out their Brent Leisure Centres membership card.

Five minutes into the second half, a pub car park was quickly assembled in Kilburn’s half so that their gigantic midfielder Damien Bedierer could headbutt Hendon’s diminutive Kevin Maclaren, stooping considerably to do so. Maclaren then weighed in with a few solid punches to the breadbasket. With both reluctant to finish their blow-trading, both were sent off but only Bedierer to the changing rooms. The public making use of the facilities might have found them distinctly less leisurely had the two men continued their cartoon-esque whirlwind of a rumble inside the building. 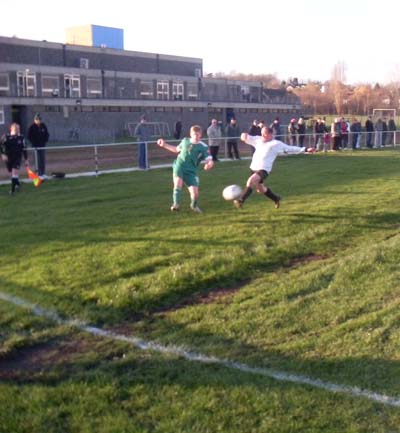 Hendon initially responded better to their reduction to ten, scoring within a minute of the restart. Lubomir Guentchev managed to get a toe-end on the ball before Christie could wrap his hands around it, and as the ball looped in the air, Casey Maclaren was first to react and head the ball into the gaping net. A minute later, the same player almost scored again but Christie was quicker to react this time, tipping over the bar.

On attempting to take a corner, Hendon’s Scott Cousins discovered there was another jutting drain right in his run-up. “Is this a fuckin’ wind up ref” he squawked, “How’m I supposed to take this?” I’m not sure how him loosening the lid and balancing it on top like he was about to microwave a soup in it helped matters but the corner made its way in regardless.

South Kilburn, having already worked their way past Clapton and Dulwich Hamlet in this competition weren’t going to surrender gladly though and eventually found their second wind, Eri Deda unleashing a 35 yard speculative shot that crashed against the join of post and bar and inspired a gut-punched “Ooooh” from the majority of the crowd.

However within two minutes, Hendon extended their lead. Laudibly James Bent refused to go down after running into the box and getting a tap on the shin. He dragged his subsequent shot somewhat but the Kilburn substitute Gareth Brobbin’s slide was only so well timed as to poke the ball home on Bent’s behalf. Still Kilburn refused to droop and three minutes into injury time, they got their second. Scott Nelmes had a shot well saved by Reading but only onto the toes of Scott Cousins for a rebound that bobbled into the back of the net. 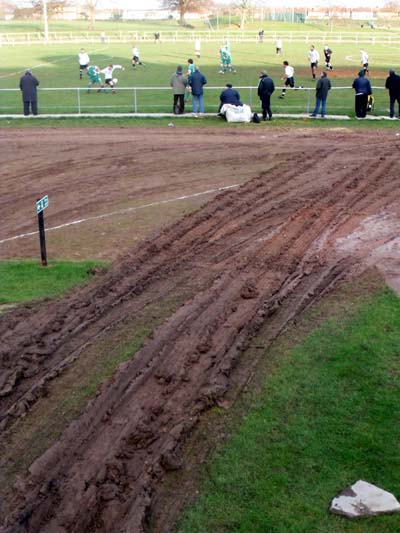 Six minutes into sorting-out-the-fight added time, and with South Kilburn throwing everyone forward, everyone was surprised when Hendon sub Jamie Busby found himself onside behind the pushed up defence and only the keeper to run in on. However, the surprise clearly stretched to the player himself as he dragged his shot wide of the post. Faced with the choice of laughing or ending the game, ref Tony King blew the three parps that ended Kilburn’s spirited involvement in this year’s metropolitan competition.

Hendon will go on to face one of Brimsdown Rovers, Redbridge or Hanwell Town (the first two’s second round tie being a bit behind schedule) away from home. They would do well to be wary of Hanwell particularly as they have set out their commitment to winning this year’s Senior Cup by beating Cockfosters 8-7 on penalties after a 4-4 draw in the first round, then dispensing with Croydon courtesy of the odd goal in eleven in the second.

Given those results and Hendon’s attacking and defensive merits shown during this game, if that tie comes to pass then it’ll be a guarantee of, well, a scoreless draw I imagine.

I live in Hendon and last year, happened to pass their Claremont Road ground (also called The Loot Stadium) on the bus. I thought the pitch needed a bit of a trim and it was only later that I discovered that they have moved. Vale Farm looks a bit of a state from your (excellent) photos. Sad to see the demise of a club with a proud history going back to Amateur Cup days, but in truth, the area, as I have discovered since moving there, lacks character. For a start, the old ground is actually on the edge of Cricklewood housing estate and Hendon itself is riven by thundering highways and no defined centre.