In a famine, any scraps will feel like a feast. As such, after three weeks of no football for me (partly my fault for missing the 4-1 win at Thurrock in the FA Trophy last week, but mostly the weather’s fault), a scrappy affair in the pouring rain tasted like Christmas dinner. Well, to cut the hyperbole down to a more appropriate size, a bit of some Christmas dinner. Today was perhaps a single roast potato, a chipolata (minus the bacon blanket) and a teaspoons worth of peas.

They say a week is a long time in politics but it’s not such a long time in football. Not enough time to fully forget the horror of the previous desperate performance or for the delight of a stormer to properly sink the foreboding of disappointments yet to come. 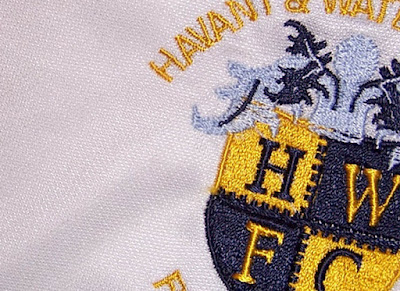 However three weeks without a game is a refresher, a wet-wipe for your grubby memories. The idea of going to football becomes genuinly exciting again. Thus I headed down to Havant expecting, well, half expecting a postponement to be truthful. That consideration aside, there was a feeling in my stomach, familiar but distant, like an Australian cousin. After much deliberation, I concluded that this must be optimism, returning unexpectedly after some time away in a Kibbutz to get to know itself.

However optimism, vis-à-vis football, is only ever really like your own 4th birthday party. It starts well with jelly, ice-cream and midget gems, but usually ends up with you weeping uncontrollably into your Mum’s apron because your old man forgot to ‘fix’ the pass the parcel.

Yet it doesn’t put you off feeling it, wanting further parties and presents. After all, sometimes the music does stop at the right time and you get your candy necklace, albeit speckled with ink. Today we just about had the energy to rip apart our layer cake of tabloid newsprint and get to the goodie that was ours for the taking.

Not that the first half suggested that this might be so. Not that the second half that suggested it might be so either, frankly. We were struggling to tear the paper off it so, tired of waiting for us to get on with it, Maidenhead eventually ripped the bundle off us, tore out our sweet and jabbed it into our hand, exclaiming, “Geez, we’d have been here all day if we’d left it to you”.

Quite the act of exasperated benevolence then for Mark Nisbet to place the ball deftly off his instep past his own keeper, Chris Tardif, ten minutes into the second half. A fine finish. ‘One F in Tardif’, formerly of our parish, made a couple of excellent saves to prevent any further addition to our sweet collection, and we just about managed to get to full time without Maidenhead getting any sugar for themselves.

Looking back over it, this write-up may feel a little cheerless given it was our first league win since the start of September, but it really was a pretty dreadful game of football. Yet, despite this, three points and victory, sweet partially fortuitous victory, is a huge boost and you can be assured that inside I am dancing. I’m just not ready to sling on the tap shoes, white tie and tails and give it the full Lionel Blair in public just yet.