The ornate stone architecture of the Grace Chapel and, over the road, the Church of St Mary the Virgin, perhaps betrays the fact that the leafy suburbs of Cheshunt, indeed Broxbourne borough as a whole, isn’t exactly a traditionally ‘football’ kind of place. However, whilst it might not be it’s heartland, it remains Tottenham territory, at least if the number of Spurs shirts that I pass on the way to ground from Cheshunt station is anything to go by.

One shop does display Cheshunt FC’s Isthmian League Division One North game, but that appears to be the only concession to the plethora of senior non-league football being played in the area.

This game was being played on a Sunday at 1pm possibly to draw in the groundhopping crowd or possibly to tempt locals to combine this fixture with watching the Spurs v Liverpool game in the bar at four. Another intriguing aspect, of course, being that this was an FA Cup game between bedfellows, Enfield (1893) having recently moved in. 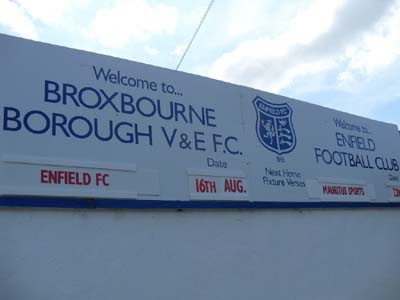 This recent arrival sees the Enfield side returning to an EN postcode, if not quite the correct borough, for the first time since leaving the iconic Southbury Road ground ten years ago. Strictly speaking, as the suffixed date would imply, it’s not exactly the same club, Enfield having been liquidated in 2007 by officials looking to wipe out the debts incurred under the stewardship of controversial former chairman Tony Lazarou. In the 1980’s Enfield were one of the biggest names in non-league winning the Conference in 1983 and 1986 both times missing out on election to the Football League.

After leaving Southbury Road, they groundshared with Boreham Wood and then Ware, during which time a Supporter’s Trust, unconvinced that Lazarou had any intention of taking the club back to the town, or indeed the Borough, set up their own club, Enfield Town, now competing in the Isthmian Division One North, a level above 1893, who were required to reform in the Essex Senior League.

Their hosts Broxbourne play in another different league, the Spartan South Midlands League Premier Division, but at the same level of the pyramid. So, despite not being totally au fait with each other, a pre-season friendly aside, this is by-and-large a level playing field. A level playing field surrounded with all manner of curious structures. 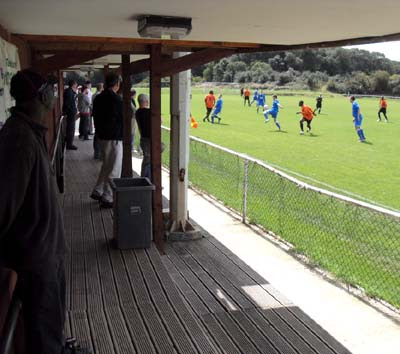 A small open stand of seating lies, baked in beating sunshine, along one side, the kind of stand you usually see at European non-league grounds. A further stand comprising seats, terrace steps and the turnstile block, curves round a corner at the clubhouse end, the directors box a triangle vanishing to the point of the corner flag. A relatively recent wood structure, it looks like a Garden Centre shed display or a row of be-decked beach hut verandas.

Despite the intense heat, the match was played, until they all got lost outside the ground, with orange balls seemingly to betray a very English pessimism that, however intense the heat, one must always scope for snow. The dandelion seeds floating across the pitch from the adjacent brambles and woodland seemed to hint though that we wouldn’t be required to break out the mukluks any time soon. 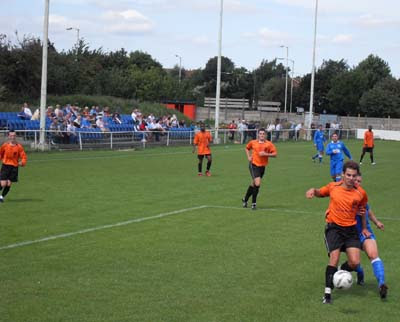 However, to start with, it looked like both sides were wearing heavy boots of some kind, as it took until the 32nd minute for the game to get going. Enfield’s Adilson Lopes sent a dipping shot just over the bar and the outstretched fingertips of Broxbourne keeper Obey Morefu to get the thing properly kick-started.

Four minutes later, Broxbourne’s Bradley Poole allows himself to be robbed of the ball just inside his half, a particular shame for him given that he was, Morefu aside, the last man. Jeremiah Nkrumah streaked forward, dummied the keeper and slotted the ball into the open net.

Within two minutes, Enfield had a second. Geoff Orcan barrelled down the right, beat full-back Rob Kemble, before slotting a handsome cross across the box allowing Nkrumah to simply flick over Morefu as the keeper lurched forward in the manner of someone, arms tied to their sides, being felled by a firing squad [see below]. 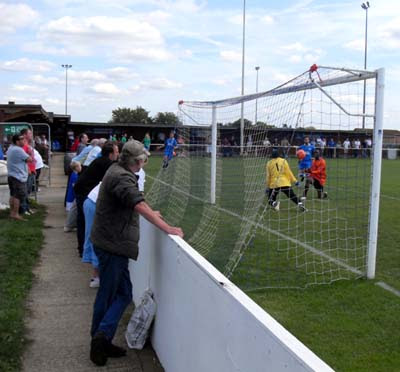 However, just as the game looked dead and buried, with Enfield coasting in to half time, the home side pulled one back from nowhere, Danny Bradford’s floating cross from well outside the box sailing over keeper Steve Wright and in off the far post.

Perhaps buoyed by this good fortune, Broxbourne came out with confidence in the second half, Matt Watts’ header bringing a save from Wright in the opening moments. However the heat of the early afternoon sun, combined with a proper contest having broken out, appeared to be getting to both sides with a 21-man free-for-all kicking off in the 51st minute. Another ref might have tunnelled one or two, but instead three yellow cards were shown. 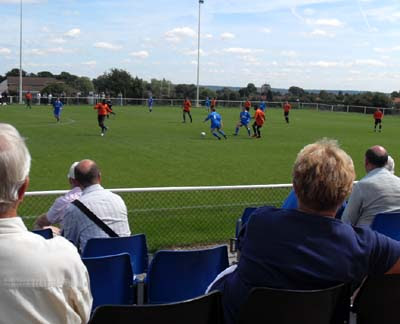 In the 74th minute, with Broxbourne still pressing, Nicky Marsh’s run down the right and sweeping cross fell perfectly for Danny Bradford but his volley skimmed the bar. A similar move from Marsh four minutes later required Lee Benmore to put in a vital tackle to clear the lines.

However, having bossed the half in search of an equaliser, Broxbourne eventually shot themselves in the foot with just two minutes remaining. Enfield sub Abul Hussain met a cross at the back post that Morefu should have dealt with comfortably but the keeper only succeeded in looking like a child trying to cradle a startled carp and bitch-slapped the ball into his own net.

In injury time, Geoff Orcan wrapped it up with a fine individual goal cutting inside and out of a bewildered defender before hammering his shot past the demoralised Morefu. Enfield move forward, and in the next round will be here, but in the home dressing room, as they face Crawley Green and, given that their opponents play at the level below, Enfield will fancy their chances of taking a handful of honk from the FA’s wallet.