On Academy Street near the centre of Inverness there is, as you might imagine of a Highland city, a kiltmakers. Turns out, from the sign nailed onto the wall outside their showroom, that Inverness Caledonian Thistle FC have their own tartan, exclusive to Scotkilt. The picture on the sign (detailing that 5% of each sale or hire goes direct to the club) shows two fellas decked out in said kilt; one chap tops it with a Caley Thistle replica top, the other bloke seemingly got up for his wedding. This says to me that the Scottish people created kilts to side-step that troublesome question of etiquette and relationship ethics that hits all men on their big day i.e. how can I work my football scarf into my wedding outfit?

However, there are two senior teams in Inverness, and the other, Clachnacuddin, doesn’t appear to have its own supporters’ club sarong. Nonetheless, it was the first day of the new season, and the new polo shirts were in, so there remained much to be sartorially excited about down at Grant Street Park. In addition, new beanies were displayed on the table between the turnstiles and the pitch. They wouldn’t be required straight away though as the sun baked the ground throughout the game which, for a Highlands holiday, really wasn’t what I had signed up for.

Mind you, I shouldn’t complain at the lack of squally winds and hammering rain as I expect the grass bank that housed a great many standing feet today is a much less agreeable proposition for mid-February fixtures against, say, Rothes. The weather-beaten faces of the grass bank faithful suggested they remained in situ regardless, although the fact that the covered terrace at the far-end was out-of-bounds hinted that they might not have any choice in that. 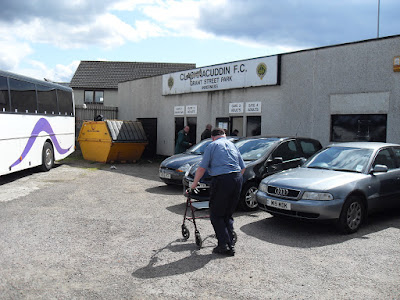 The Highland League operates in a northerly hinterland barely touched by the Scottish Premier and Football Leagues, although more so than it used to be. Despite the lack of a pyramid system, the Highland League has lost several sides to the ‘big’ leagues in the last twenty years.

Inverness Caledonian and Inverness Thistle merged after being advised that a joint application for one of two slots made available after the Scottish Leagues expanded by a division in 1994 was likely to be more successful than either of their individual bids. That expansion also robbed the Highland League of the Dingwall-based Ross County, whilst the SPL’s growth to a 12-club division meant both Peterhead and Elgin were nicked to make up a ten in the Third Division in 2000.

All this has meant their territory has rather been encroached on. Not that the Highland League is a cover-all in itself with only Fort William working out of the west coast, and being so famously rubbish that they have only won 5 games and drawn 2 in the 112 games of their last four league seasons. Mind you, it covers a wider geographical area than during its earliest days.

Clachnacuddin’s last championship, in 2003/04, meant they equalled Inverness Caledonian’s record of 18 Highland League titles. However, one must factor in that for the first thirty or so years (having been first established in 1893) the league consisted of no more than ten sides, and often much fewer. In fact, in 1896/97 only four clubs were able to complete the season, and all of those were based in the same town, Inverness Citadel being the final part of a foursome with Clach, Thistle and Caley. The following year the league expanded to nine, but even that intake of five new sides included two further teams from the city: Inverness Union and Inverness Celtic. 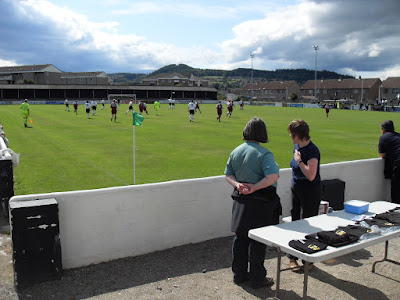 Indeed, looking at the league tables from that era, teams like the Cameron Highlanders, the Seaforth Highlanders, the Highland Light Infantry and even the Black Watch would appear for a season and then disappear for a few seasons if not for good. With that in mind, Clachnacuddin’s proud record must have an asterisk put against it. Mind you, as the saying goes, “you can only beat what’s put in front of you. Even if hardly anyone actually is ever put in front of you.”

As is clear though, the Highland League has grown in membership and stature over the years, their results now deemed important enough to appear in the classified round-ups on the radio. It is a league chock full of wonderful club names that are so evocative of the region you could make a big f***-off haggis out of them; names such as Buckie Thistle, Forres Mechanics, Fraserburgh and Inverurie Loco Works. Three more, Strathspey Thistle, Turiff United and Formatine United, have been added this season to take the league up to eighteen clubs. Sadly, the gorgeously-titled Banks O’Dee FC missed the cut.

In terms of the names, I’ve long been drawn to Clachnacuddin simply because they appear to be the most ‘Scottish’ of the lot, by which I mean the most Scots Gaelic sounding. Which is why, until I started planning my holiday last year, that I didn’t realise that Clachnacuddin was actually a city-based outfit. It’s a name that suggests that they should really be playing away from civilisation on a pitch where hoofed clearances are in danger of drowning in an adjacent loch. Not that that is so fanciful a notion, what with ‘Clachnacuddin’ translating as “stone of the tubs” relating to the stone where women returning from the banks of the Ness would rest their wash-tubs. This inscribed stone used to sit outside Grant Street Park, but now resides outside the town hall. 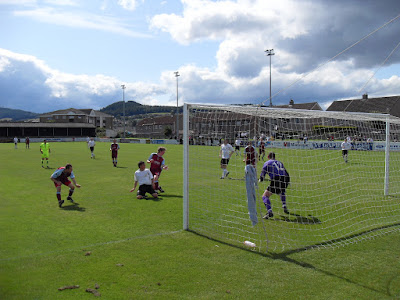 It appeared to be a fairly low key beginning to the league season here against Keith, display of new merchandise aside. When asked by one punter if there was a programme available, the turnstile operator explained “Nah, the guy’s away”, although this being Scotland it was difficult to tell whether this meant he was on holiday or he’d just run off somewhere.

This understated nature of the occasion was understandable given that Clach finished eleventh of the then fifteen last season and they still owed a significant amount of rent arrears to the Highland Council for the use of the ground leaving them somewhat short on the playing budget. In addition, there had been confusion over plans to build housing over the current social club and dressing room structure and move a new facility to the far end of the ground.

Not that the Clachnacuddin players appeared in any way affected by the uncertainty surrounding the club nor the serenity of the atmosphere, turning in a strong loosener that left Keith as battered as a chip-shop Mars Bar. Keith couldn’t even blame the officials. The ref had said strongly to his assistants as they warmed up, “I need you to be fucken switched on today”, and they remained so. “You’re playing a blinder lino” shouted one home fan after a close off-side call, earning himself a genial smile and nod from his target. 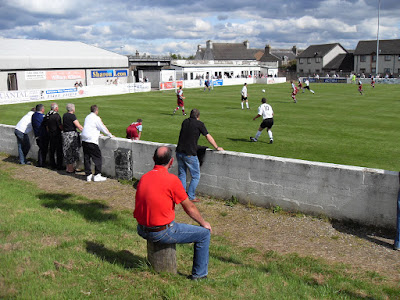 Despite Clach’s overall domination, Keith had started strongly in both halves. The first major chance of the game fell to them on 15 minutes, when Garry Harris crashed a free-kick off the underside of the bar. However, the home side took the lead ten minutes later, a corner by Alan Pollock eventually coming to Stuart Leslie who performed an over the shoulder number that went in via both the bar and the back of keeper Ivor Pirie’s forearm. After several squandered chances, Clach’s second came three minutes prior to half-time, a corner being flicked on by Colin Williamson to Gordon Morrison who turned it in through a number of bodies.

During the interval, the Grant Street Park tannoy was put to public service use, the announcer completing a number of similar enquiries with “I’ve still not found the owner of a set of car and house keys found behind the dugout. So if you’ve been round there, stick your hand in your pockets, otherwise you’ve got a long walk home.” It is to his credit that he spent his time doing this rather than trying all the locks in the car park and abandoning the second half in favour of a joy-ride.

Despite Keith starting the stronger in the second period, Clach were largely coasting, and this was perhaps signified best by their physio tucking into a pie and a cup of tea as he leaned against the wall next to the dugout. You could hardly blame him though, given that Clachnacuddin recently won a “Best Football Pie” award seeing off 24 other Scottish and 105 English clubs in taking the title. Stick that in yer grill, Delia. 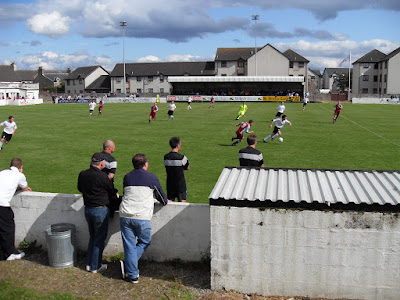 On this display, Clach could well be challenging for honours of a more meaningful type come the end of the season, as after a brief period lacking in vitality, they finished strongly. Neil MacCuish pinged the bar in the 53rd minute, whilst three minutes later Alan Pollock rose like the platform of a cherry-picker to meet a cross perfectly and guide home the third.

Within ten minutes, they had a fourth. After MacCuish had had a shot parried by the keeper, most of the players stood around assuming the ball would trickle out for a corner. Stuart Leslie though, so switched on his head was glowing, nipped in and dragged the ball back, turning and firing under Pirie’s lackadaisical frame whilst everyone else was dabbing the sleep out of the eyes.

That kind of alertness is exactly what Clach manager Iain Polworth will need from his players if they are to be greater than the sum of their parts and have the kind of breezy league campaign they’ve not really had since winning the whole show, now six long seasons ago.
Posted by skif at 12:01 am

Love the idea of the stadium announcer nicking off in a punter's car to pull a few doughnuts...

As always, a very enjoyable snapshot of a club, a league and a game, which has whetted my appetite for another season of Dub Stepping.

This ground makes Fareham's Cam Alders look like a significant step up the ladder in accommodation, but by the look of the pics, some of the locals enjoy a cracking view from their bedrooms. Nice to know there's tannoy announcers out there with a strong moral code.

Good account this, skif. Not made it to Grant Street myself yet.

You'll also have seen why Keith are always "Marty Allan's pisspoor Keith" on "Gable End Graffiti". In fairness I've a soft spot for them, Marty Allan is a Mo legend and there are a few old Montrose players in their squad. Just a shame that, like the ghastly Red Schichties, they play in maroon.