Adrian has been on his travels again, and he rubs our noses in it once more with this fine report from the UEFA Cup's Round of 16, a title that manages to be both portentous and modest all at once.

As we set off for the Luzhniki I was rubbing my hands together for two reasons: firstly at the prospect of a classic encounter of European football, secondly, because I was so, so, cold. And it was only -5c.

The subway journey across rush hour Moscow was an experience in itself. We had our map, we knew where we wanted to go, and we knew where to change. The only problem was that it was all in Cyrillic. I had a nice subway map with colour coding and stations in Cyrillic and Roman text, but no, all logic was thrown to one side on realisation that there was no colour coding inside the subway, and that each colour (which we couldn’t read) had a corresponding line number. So it was time for a fun game of match the symbols. “If we take the line where the first stop has the first letter which looks like a beta but with a line through it...” This wasn’t helped by the mass overcrowding on the platforms and carriages. Russians being just as cold as their weather when it comes to hospitality meant that there was plenty of barging and pushing with no regard for anyone’s personal space, and that was just the elderly women. Surprisingly we were ruthlessly efficient and got to the Luzhniki with ease. 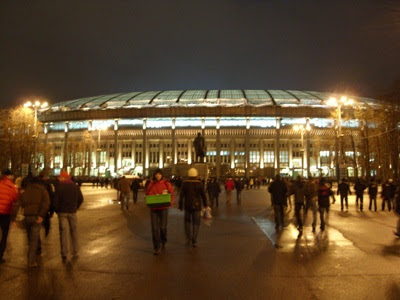 As we stepped into the bitterly cold evening from the subway station we were greeted by security. Big Russian military security, with the traditional fur hat and trench coat combo. That was frisk number one. In our clan was myself, Tracy the Kiwi, and Joe and Rick from Romford. Tracy and I had already bought tickets earlier in the day for the bargain price of £8 (yes my friends, UEFA Cup action for less than an in at Havant & ‘Ville), so we waited for Joe and Rick to queue for theirs. I scoped out the people around me, expecting to see gnarly Russian men out for a brawl with some unwilling Ukrainians, but I was wrong. There were women, hot women; trophy wives no doubt, and a lot of them. I thought football in Russia would be a male dominated affair, but women and children were in abundance. 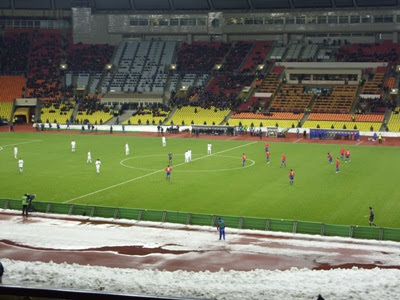 It was then time for more frisking. As we entered a barrier channel there was more frisking from a big Ruski, and then further frisking at the end of the channel. A short walk later and we were greeted with more frisking at the turnstiles, by this time I just said, “Awww, who’s for a hug?” that guy certainly was. Fumbling our way through the electronic turnstile we found ourselves inside the warmth of the stadium concourse. Desperate for something warm to eat or drink, I looked at the food available and nothing in particular looked too appealing, until a small crowd caught my eye. Ladies and gentlemen, I introduce to you, corn on the cob at football. Good times.

We then climbed the steps to take our seats, and it was time for the fifth and final frisking. I thought this club was about the Vagner Love, not the man love. I had high expectations of the atmosphere. CSKA actually stands for “Central Sports Club of the Army”, which conjured up visions of military like crowds chanting passionately in unison. Nope. Reading a match preview, Moscow midfielder Evgeni Aldonin was quoted as saying: "Russia against Ukraine is a big football rivalry and the Luzhniki game will be no exception." Hmm, perhaps there are some exceptions Evgeni? To be fair, creating an atmosphere in a 78,000 capacity stadium with an attendance of around 20,000 was always going to be a tall order. Perhaps the CSKA fans decided it was so tall an order, they wouldn’t bother in the first place. 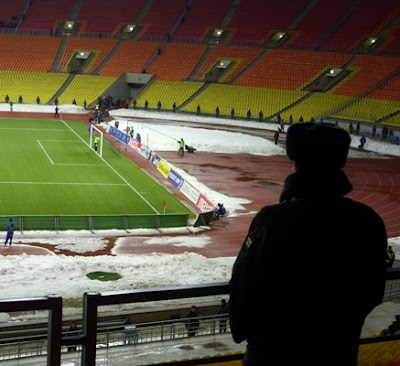 The game kicked off and was almost as stale as the atmosphere. Few chances to speak of and very little to get excited about. I tell a lie- half time was worth getting excited about. I was so cold it hurt; half time would provide an opportunity to shiver in the concourse and huddle together with my comrades. It seemed protocol, as most of the supporters followed suit. The second half showed promise with Vagner Love striking a penalty on 50min after Răzvan Raţ fouled Miloš Krasić inside the box. The promise then diminished into another dreary spell of football, in the icy cold. Did I mention it was cold? 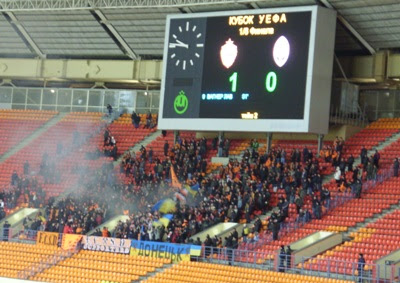 The referee blew for full time and that was that. Moscow would take a 1-0 lead to the Ukraine for the return leg. As with sports events at home, I was expecting the departing crowd to be filtered into the subway by metal crash barriers. Russia uses a similar concept. However, rather than using barriers the Luzhniki used military personnel. F***ing scary military personal. Lines and lines of trench coats with mighty batons tucked inside their belts fed the supporters on their way, with their piercing eyes staring dead ahead. They were young, probably on national service, but you would never want to mess with these mother truckers. Needless to say everyone behaved exquisitely.