Years ago I gained a bit of a reputation when I travelled on foot to watch the Havant & Waterlooville youth team play away at Horndean on a dog-hot Sunday afternoon. Not so much a rep for being willing to walk ridiculously, unnecessarily long distances for little or no reason, it being the best part of a twelve mile round trip, but rather for being a bit of a dick. That was probably a fair assessment. If I’d left it at just the once. A second trip though, a second go has got to turn the madness into genius, like a second hit on the head clearing the amnesia of the first. Hasn’t it? Hello?

Well, put it this way, domestic duties with the olds meant that the Hawks away at Bath City was out of reach and, frankly, who doesn’t need to shed a little bit of the Christmas weight? Onwards then, through Gundymoor Wood, through Waterlooville and through Cowplain to Five Heads Park, a ramshackle ground with jovial old fellas on the turnstile, tea served in a proper mug and a selection of biscuits on a cracked plate awaiting the ‘directors’ in the dressing-rooms-adjacent shed. I’ve been slacking off the hobo life a bit of late and, I don’t mind telling you, it’s good to be back. 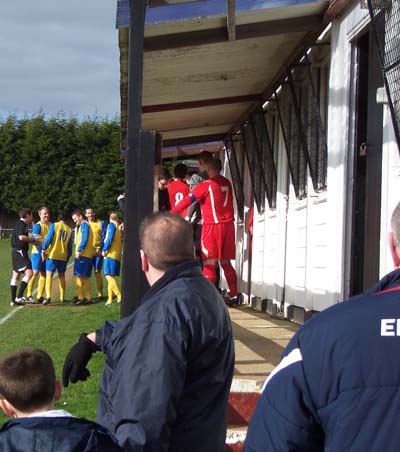 Bits and pieces ground it might be but its centrepiece is most definitely the pitch. It slopes so much that those wishing to walk behind the goal at the far end of the ground tend to do so whilst edging along the fence like a disgraced banker on a window sill. If Horndean are struggling for coin, they could just tie a rope from cross bar to cross bar in the summer months and market it as a white-knuckle death slide.

As well as the tinpot ambience, I went to Horndean on the promise of goals, goals, goals, what with the home side currently occupying the second from bottom slot in the Wessex Premier with a goal difference of -56, whilst the visitors VTFC arrived displaying a +89 differential, and with two 8-0’s, two 7-1’s, four scores of 6 and of six of 5 (one of which, ahem, came against H&W in the Hampshire Senior Cup) in their back pocket. Fresh from reaching the Hampshire Senior Cup final for the first time since winning the very first one in 1888, VTFC are in a comfortable second place in the Wessex, with three games in hand of, although sixteen points behind, the as yet undefeated Poole Town who incidentally handed VT some of their own medicine back in December with a sound 5-1 beating. 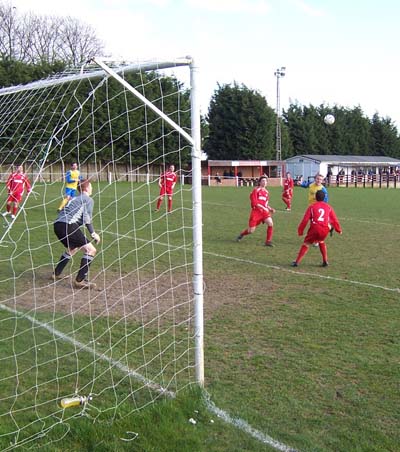 VT’s roots are as a shipbuilders’ works team that began life as Woolston Works, morphing through Thornycrofts (Woolston) and Vosper Thornycroft in line with the parent company, eventually becoming VTFC in 2003. However, with money behind them, it is clear the ambition is to move up the pyramid, far beyond those early roots, particularly with some of the players they have on show, several having started life at Southampton. A number have recently played, and could still play, at a much higher level.

My Hawk chum Mr Ketchup, who has seen VT already this season, told me that despite the star names that I should expect a load of fat blokes, but fat blokes who know how to knock the ball around a bit. That might have oversold it a tad, but certainly Adam Caulfield, Kevin Gibbens and Ryan Ashford inhabit their playing shirts like cavity wall insulation, all of them turned out like the early developers in middle school PE whose mum’s haven’t been able to afford any new gear for a couple of summers. 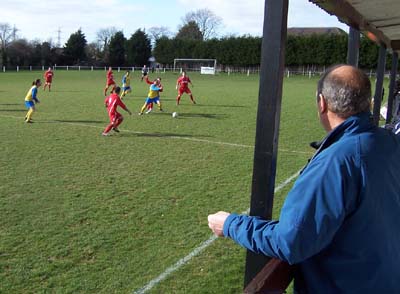 Horndean’s side have a much more youthful and svelte appearance, although this is perhaps unsurprising when last summer their manager Matt Parr upped and left for Hayling United taking most of the team with him. As a result Horndean asked Hampshire League side Denmead & Purbrook to take over their operation. On top of this, Horndean were down a goalkeeper for this game through suspension and thus had to throw in 17 year old keeper Matt Fisher against VT’s offensive artillery for only his fifth senior game.

The likely onslaught began early with Gibbens having a header cleared off the line in the fourth minute. For a man who’s let the pies get the better of him since his days at Saints, Oxford and Eastleigh, he made plenty of running into the box from his central midfield position. However, Horndean clearly weren’t to be overawed and had a chance of their own four minutes later, as Louis Bell Jr. met Tor Spicer’s cross from the by-line with a cushion sidefoot that required a diving save from VT keeper Lee Webber. 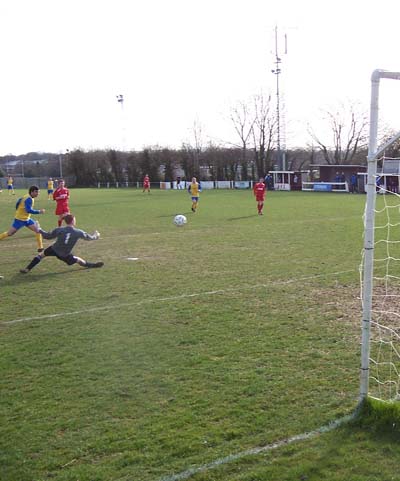 Yet within a couple of minutes, the expected order was restored, as Ryan Ashford curled in a 25 yard free-kick through Fisher’s callow wrists and inside the far post. Almost implausibly, however, Horndean defied the league table to go virtually straight up the other end and equalise. Spicer broke behind the VT defence, drew Webber into committing himself early, skipped round him and tapped into the empty net from an acute angle.

Not that the restored parity lasted long, only another couple of minutes elapsing before Warren Hunt sashayed through, raced down on Fisher and clipped the ball home [see pic above]. Eight minutes later, moments after he’d had another header cleared off the line by Danny Audi, Gibbens found himself ideally placed in the box once more, but as the ball fell to him his fellow captain Robbie Warwick slid in to block. Unfortunately for Warwick his clearance crashed against his team-mate Barney Butwell’s legs and trickled in. 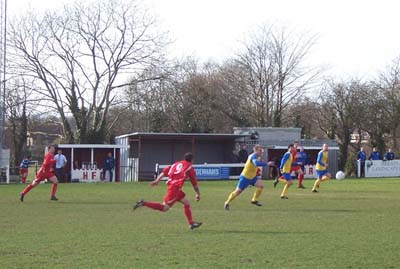 With the game barely a quarter gone, a cricket score seemed in the offing, VT looking good for a total of 471 for the loss of 6 and a declaration before tea, particularly given the fact that the slope would be theirs to exploit in the second half. Mind you, for all the Zulu-esque ‘from the hill at Five Heads we descend’ potential one must also remember that, for the fat lads, the one thing about hurtling down the tilt is the having to climb back up it again afterwards. After all with so many middle-heavy types in the Boatmen’s line-up, you could equally imagine the incline causing them to topple uncontrollably forwards and collect in a rather undignified heap on the bottom wall, unable to move until gathered up in the scoop of a bucket loader.

However neither scenario occurred, with VT feeling that, all things considered, they’d done enough for now and could save themselves for the rest of the run-in. However they certainly weren’t chanceless with Paul Sales and Barry Mason bringing terrific saves from the young and increasingly confident young Horndean keeper. Sales is certainly playing beneath himself at VT, although at 35 probably wants an easier life after spells at Salisbury and Eastleigh. Yet he’s still in good shape, particularly by comparison to the company he now keeps, and remains an excellent target man, and one with a great touch. He may look like Jamiroquai and have the hair of a Shetland pony but you can’t have everything, particularly at this level. 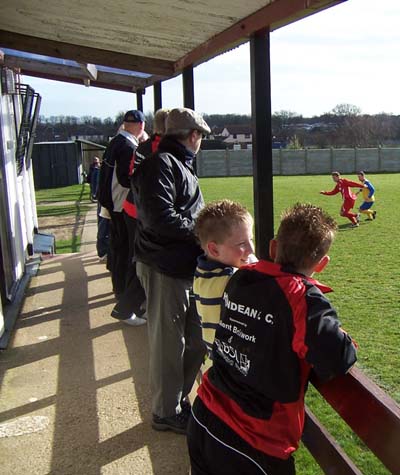 VT may be needing snookers in terms of overhauling Poole Town but they’ll not give up, as they won’t want a second place finish for the second year in a row, watching the team above them ascend to the Southern League once again, with no play-offs at this level to assuage their frustration.

Just before the end of the game the tannoy burst into life for the final time, announcing itself, as it had on each occasion, with the sort of call signal which might ordinarily be followed by a young Ruth Madoc purring the words “morning campers” and announcing the imminent start of the children’s pop drinking contest. In actual fact the message is short, simple and repeated for clarity, “please return all mugs to the tea bar, please return all mugs to the tea bar.”

Excellent blog my friend, thanks for linking mine as i have now done for you. Looking forward to our paths maybe crossing in the future

Now that's an announcement I've never heard at St James' Park - but give it a few years if things keep on the way they're going and it may well happen...