It is perhaps appropriate that we played Worcester this weekend, being that it was a year ago today that we played Liverpool in our biggest ever game, and now fifty years since Worcester played and beat them in theirs. With that in mind and as fond as we are of a big train trip, the extended London Branch pencilled this in as the Anfield anniversary beano some time ago. Sadly, it didn’t quite turn out as planned and thus the Hereford bound train out of Paddington contained but a solitary Hawk.

Now over the years I’ve soaked in any number of excuses tendered so as to avoid my unsightly company: emergency agreements to pet-sit; broken VCR’s combined with the sentence “you know how I hate to miss Groundforce”; and the invention of great Aunts, recently deceased. One of the expected duo blamed work fatigue thus also rubbing his workplace conscientiousness and eager toil in my idle, malingering mush. The other, however, excelled himself whilst on French slopes last week. His ski-pole became the sword upon which he threw himself to cause sufficient damage as to avoid the sufferance of a five hour round train trip with me. A lengthy experience I grant you, one which some have likened to “being shackled to a Beirut radiator”, so perhaps you can understand his desperate, injurious bombast. 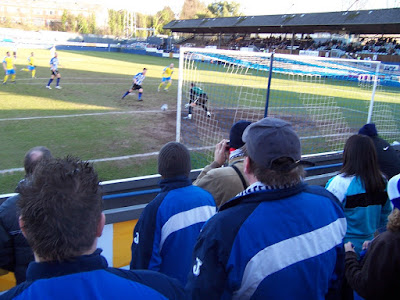 Still, in company, or on my ikkle ownio, Worcester was always on my radar for many reasons. Firstly, their ground is big, old-fashioned and falling to bits, just the way I likes ‘em. Secondly, it may not be long for this world as a new stadium is planned. Thirdly, their geographical location means they are likely to flit back and forth between Conferences North and South depending on the locational make-up of the promoted and relegated catchment each summer, and so may be off the map again next season. Lastly, it’s a grand city and we’ve not been here since we last played them in the Southern League in 2003. It is always nice, of course, to take the nostalgia hit that comes with returning the scene of beanos past.

Back in October 2002, to celebrate our man Mr Ketchup’s birthday, we trained it to Worcester. In the Postal Order outside Foregate Street station, we all ordered a warm beer of the birthday boy’s choice, in an attempt to settle a long-standing argument between him and Ade, our defiant lager-lapping associate. Ade has rarely let a real ale pass beneath his nostrils without proclaiming “vile muck” in the most theatrical of his voices, and would sooner smite you hip and thigh than allow you to coerce him into a pub with the words “we’ve got to go in this one, it’s in the Good Beer Guide.”

Ever keen to test the limits of pub science, our party made our way through a pint of Summer Lightning each. Simon thought it was alright. I, as a very occasional drinker of certain real ales back then before giving it all up in favour of sweet sobriety, sipped cautiously at it and continued to do so, to see how many shades of green I could turn. Shaun took the Band-Aid-on-the-hairy-bits route and downed it sharpish to minimise the pain. Ade’s opinion remained unchanged; the ‘there’s bits of woodlice in that’ theory taking on extra vehemence, if anything. 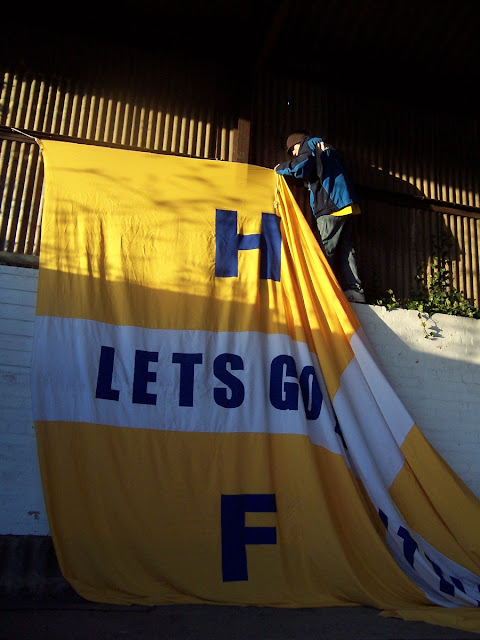 We lost the game 2-1 but, still, it was a birthday party, and so back in the bar we drowned our sorrows. Midfield stalwart Neil Champion kindly got a round in by way of apology for his own-goal ‘winner’. We informed him that nothing was his fault, and continued to do so even after he’d handed his money over. Ade also decided that he had to let centre-half Gareth Hall know that he had been awesome in the only way he knew how, by planting a gentle kiss on the former Chelsea man’s cheek.

Of the journey home, we remember little, although Barry 2-Pints has often been cited for his shuffly dancing on the train station platform. On the train, we also had the added distraction of Hartlepool’s recently acquired striker Marcus Richardson sitting amongst our number. Being surrounded by ten tipsy gold-clad Hawks seemed to unsettle the big man a bit, but as I worked with a Pools fan back then, I felt it my duty to interrogate him. Ade, meanwhile, tried to coerce him into signing for us should the Hartlepool deal turn sour. As a point of information, Marcus has played for about four hundred clubs since but has yet to turn up on our welcome mat. Whether we pissed him off or not – he was a gent and happily shook our hands and wished us luck, before departing like a startled cat as the train doors opened at Reading.

Following a quick stop at Winchester’s Albion Tavern for a quick last orders, the last part of our journey saw two of our number, one male and one female depart the safety of our huddle to, err, ‘converse in depth’, elsewhere. Of course, this would have been great, if one of ‘em had not borrowed my shirt to wear for the day. No offence to either party, but burning did seem an option for when I got it home. In fact one suggestion, from Shaun, was that the ashes from said bonfire be kept in an urn and awarded at the end of each season for most drunken and embarrassing moment. However I’m not sure anything has topped that since, so the guilty parties can take some pleasure in knowing that the Ashes have been retained, possibly in perpetuity. 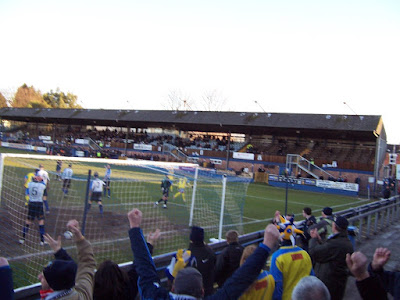 One thing we always noted on travels to Worcester was the size of the crowd, which was always pretty substantial in them old Southern League days, and also almost inconceivably consistent. 1004 attended in 2001, 1003 in 2002 and 1014 in 2003. However four hundred souls have disappeared in the last five years, without pandemic. Perhaps the fact that we’re playing them in cold January rather than warmer autumnal months when hopes remain high has something to do with it, as both they and we are skulking around the hindmost regions of the table and probably as equally resigned to this being an upper mid-table season at best.

Still, that’s the bleak view that looks at our recent nine-game unbeaten run and says, yeah, well, five of them have been draws that we probably should have won, and two of the wins were in the FA Trophy. On the plus side we are proving difficult to beat, when playing very well (as against Chelmsford at home last week) and even when we’re not (as in this Worcester game).

It wasn’t until about the 40th minute in each half that we began to play and it doesn’t take Alan Shearer to tell you, seconds after Alan Hansen has said much the same, that turning up for ten minutes each Saturday is not a winning tactic. On said minute we equalised Matt Dodd’s 14th minute opener, Gary Holloway stroking the ball home after a hectic goalmouth scramble. Steven Cook’s goal-line clearance earlier was also a vital moment. 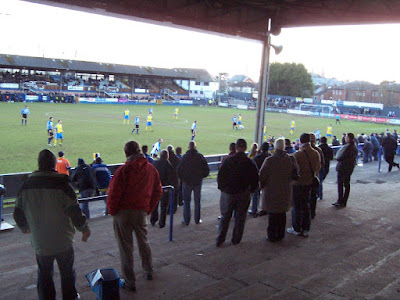 We closed out the first half with renewed optimism but into the second half too many players carried their Z-game over, and it was no real surprise when Worcester scored, although it took Marco Addagio’s sublime strike careering over Nathan Ashmore’s head from some distance to re-establish their lead. Later it took a fantastic reaction save from Nath, continuing to deputise for Kevin Scriven who is now sidelined by injury, to stop the game flooding away. A couple of early stray kicks aside, Nathan visibly grew in confidence, claiming several excellent catches to add to that vital save.

All seemed a little hopeless, especially after the game entered added time. However from a corner, Jack Compton got the ball on the edge of the box, calmly stepped past a defensive body then unleashed a daisy cutter that eluded the many limbs present and rewarded us with a hitherto unlikely point. Yet despite the elation, one could not help but think that whilst last week we drew and deserved more, this week we took another point but deserved much less.

The Chelmsford game definitely felt like a corner properly turned, whereas this game felt like a nervously elongated parallel parking manoeuvre testing the patience of the driving instructor. Last week even the most negative thinkers were as aglow as a winter sun; this week the talk is likely to be of the falling back into bad habits. If the Hawks were a vehicle, I think at the minute we’d be a re-fabricated milk-float, in that we are a contraption that has started to deliver, but probably won’t be going at a furious pace any time soon. Perhaps next week’s Trophy game at home to Crawley will add a bit of a turbo boost, as our win at their place in the Cup did, albeit briefly, back in October.