Both have had experience of a circus. Let me explain…

In Nellie's case the circus was the big-top and acrobats type; clowns, monkey in a fez, all that game. In H&W's, it was an FA-cup inspired media circus. What differs, you could argue (ignoring the obvious), is the manner of departure. Nellie left of her own accord, turning on a sixpence (as much as an elephant can) and doing one out the door, whereas our circus eventually upped sticks and left us, reportedly seen in February heading off in the direction of Barnsley.

However, despite our expectation, the circus has come to find us again, TV crews once again queuing up to film our bar, our club shop and our players at work, at their other work (if it provides a suitable visual metaphor) and at play. You might argue then that the Hawks and old Nell are not the same at all, but the way I see it, both have been the masters of their own destiny. Nellie fancied doing the off, and did so, whilst we fancied being centre of attention again, so went out and grabbed it at Crawley despite form, despite a lack of confidence and despite the strength of the opposition. 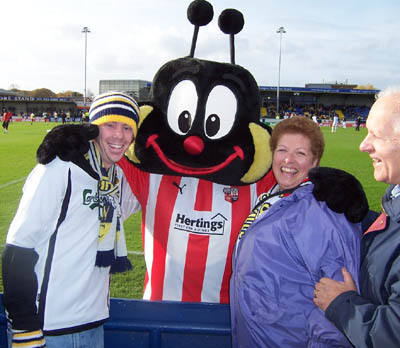 Semi-professional footballers rarely get the limelight so you can imagine they love it when it comes and although we may only have four fellas left from our previous trip to the circus, you can tell they got a taste for the 15 minutes+. In fact, our lot have been getting so used to the featurette appearances on sports programmes and the general showbiz lifestyle that part of last years cup run money had to be spent on a giant mirror surrounded by light bulbs for the changing room.

So, let me tell you a bit about the return of our circus. Pushing through the turnstile an hour prior to kick off, one of the first faces I saw walking around our gradually-filling ground was Clive Tyldesley’s, and it was wearing a look that said “Are you sure about this? I’ve done Champions League finals.” Not long after, Andy Townsend strolled out, caked in so much make-up he appeared to have mistaken being at the game for being on it. I half expected him to give those of us standing nearby a cheeky wink before inhaling sharply through his nostrils and proclaiming “the smell of the greasepaint, dear, smell of the greasepaint” like a semi-retired ham pining for the music hall. 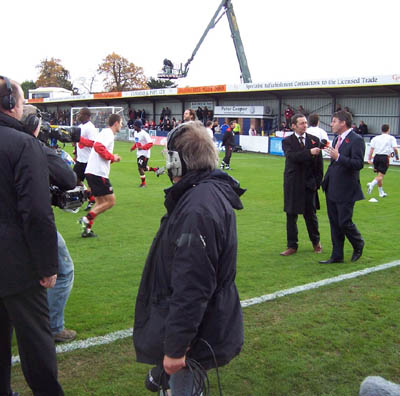 Joining Andy in the shed-on-stilts that was the pundits lounge was Steve Rider, a man so slick you would usually find him coating sea-mammals next to a stricken tanker, and Martin Allen, borrowing Deirdre Barlow’s larynx for the occasion. Elsewhere, a weather-beaten Ned Boulting was being sent to explore the nooks and crannies of West Leigh Park, sneaking a look at the player’s willies over Shaun Gale’s shoulder in the dressing room, and loading the pockets of his winter coat with coronation chicken sarnies whilst chatting to our chairman in the board room.

Everyman Andy, being a dogger that turned out for Weymouth and Welling in his distant past (before going on to be a dogger at a much higher level) was sent down to join Ned on the pitch and try to remember if he turned out for his early clubs on it. Given WLP would have looked a lot different when he was a nipper, you can forgive his struggling memory. Chances are he probably didn’t, given Havant Town were in the Hampshire League at the time. Indeed, he reacted to, and banged on so much about the slope in one of our corners, that I’ve barely noticed in watching 170-odd games there, it was not so much like a man who has never been there before so much as a man who really, really doesn’t fancy a skiing holiday. 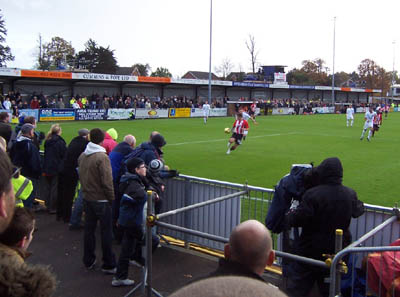 It says something about our club, or perhaps about our recently acquired collective hubris, that we can react to a defeat by a league side with some degree of disappointed disbelief. Let’s face it, ITV were here for our ‘form’ in this area, and it had got to the point where we feared not Football League and Premiership giants, only Conference South strugglers, amongst whose number, I should add, we have recently arrived. 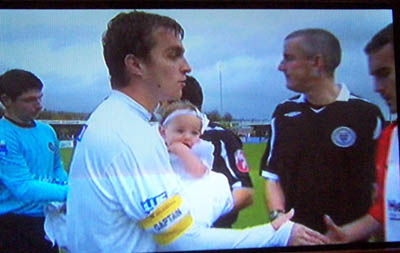 However the protective bubble of the cup has now evaporated, as have the talismanic powers of Young Adrian’s lucky hat. It was rubbed, as tradition dictated, but still we lost. I do hope Adrian’s mother can knit something new up for next season, as I will need something to rub, and I’d really feel disloyal and wrong if it wasn’t attached to Adrian’s head at the time.

So we’re disappointed, after all we gave it a good go, particularly in the second half, and had we been able to convert something from the six-yard-box scramble at 2-1 down in the 81st minute, we’d likely have had a draw, or more, to celebrate. As it is, we suffered the old, old story: boy meets girl / girl meets boy / team going gung-ho for equaliser get caught on the break. 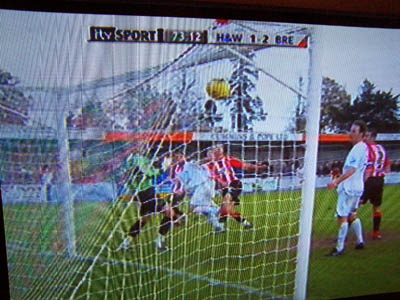 We can’t be too mopey though, especially given our pre-Crawley gloom and the sense that defeat would be inevitable. Besides, every other non-league club would queue up to spit in our faces if we started to moan about anything. So here are some reasons to be cheerful:

*Not getting mullered in front of a national TV audience
*Scoring when the game wasn’t already gone
*Another heap of foldin’ money in the tin for giving ITV the keys for the week
*The director-of-football’s one-year-old grand-daughter trying to eat Ned Boulting’s microphone then being carried out by captain Jamie Collins for the handshakes and the toss as if to say “you can beat us Brentford, but you’ll be breaking this little girl’s heart. Look into those innocent eyes. Honestly, could you live with yourselves?” 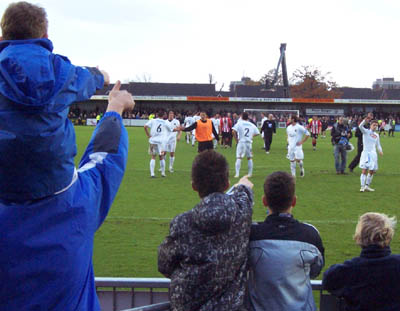 So, another memorable cup campaign. However with that bubble gone all pop, we now (unless we can get a run going in the FA Trophy – which might be nice in the sense that we can keep singing “Wem-ber-lee, Wem-ber-lee…” for a little while longer – but otherwise might be too much of a distraction) have to focus on our league form. Five defeats on the spin ain’t pretty, in fact it’s as gruesome as a pancake-faced Andy Townsend.

For next weekend’s match against Newport County, with whom we are currently wrestling for the ‘Biggest Underachievers’ trophy (there is a trophy too, a pewter figurine, atop a little wooden base, of an unshaven man in a three-sizes-too-small vest and ragged pants asleep in an armchair), and who are managed by former Hawk Dean Holdsworth, we will need to get our feet back on the ground quickly, and for them to be running as they hit.

1. H&W aren't about to slip of their iron chains and run off to the Hindustan, never to be see again. At least one would hope.

2. Brentford might not have hit the net three times if Nellie had been parked in front of it.

3. One is football club, one is ephelant. QED.