As with tubs of Ben & Jerry’s ice cream. As with the quality of films in the Star Wars series. As with the comfort of knowing there’s a Woolies on the high street and thus Pick n’ Mix cherry lips are never too far away. As, now, with our undefeated record against Eastleigh. All good things, rather sadly, must come to an end.

One of m'Hawk chums, who has watched Waterlooville and subsequently H&W for the best part of 30 years, has the perspective that, in many ways – in terms of attendances, money in the bank and national reputation - we’ve never had it so good. I agree. It is a cast iron fact that the last 12 months have been the best our club, or its antecedents, have experienced. However, on the field, it is becoming less and less fun by the week and there's only so many months without a league win that our faith will take. The thing with thrill rides is that they too must reach a halt.

It feels now that this year’s cup run, being on the telly with everyone reminiscing about last season and all that, wasn’t part of that ride, but actually just us queuing at the photo booth afterwards to get a picture of ourselves screaming; those pictures usually being taken at the start of a steep descent. The screaming in those pictures would denote excitement and thrill. Pictures of us now would still find us screaming, but with angst as the catalyst. 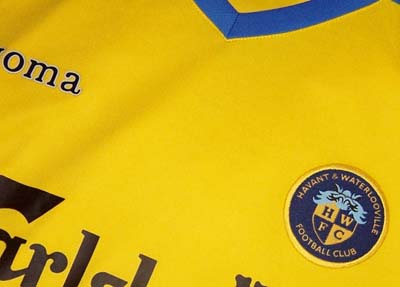 For sure, we won against Fisher Athletic in the Trophy last week, but you have to factor in that Fisher are now potless, fire-fighting with amateur players, packing the box with battling legs when under pressure and essentially sending out their side to throw themselves on any bombs to soak up the blast. However, we created enough chances in a fairly comfortable, in the end, 2-0 win to suggest we might be able to go to Eastleigh and still be able to strut around afterwards in that superior peacock-ish manner that comes with never having lost to your local rivals.

Our recent history with Eastleigh has been well documented on these pages (see the ‘Previously…’ links below to re-acquaint), but to re-open old issues here won’t mean we get this weekend’s three points back. As supporters, we’ve done the moral high-ground thing and we’ve done the winning and drawing thing, and we’ve not been shy to register our displeasure at their modus operandi nor to lord it after once again keeping a zero in the losses box.

With Eastleigh’s hierarchy having this week publicly chided their Supporters Club for not running a festive raffle this year, we thought prior to the game that if worst came to the worst we could always start La donna è mobile-ing “We’ve got a Christmas draw, we’ve got a Christmas draw”, but when that very worst kind of worst actually came, we thought better of it. After all, consolations wouldn’t have come that scant since Bon Accord centre-forward Tam McThrifty reacted to the final whistle at the end of their 36-0 defeat to Arbroath in 1885 by picking up the ball, placing it in the six-yard box and hammering it into the roof of the empty net before turning round, blowing a raspberry and waggling two fingers of each hand in the direction of the home side. The home side having long since left the field.

Thus, out there on the terraces and on the forums, it is now our turn to take a few punches, and to prove we’ve got the chin for it. However, on the field and in terms of our league season, it’s fair to say we’re currently kissing the canvas, our eyes whirring around like those of Wile E. Coyote, upon receipt of a giant mallet to his bonce. You could say it makes it even worse that Eastleigh currently sit 3rd to our 16th, with more than double the points tally, but if we measured everything we did against Eastleigh, just cos of the whole manager thing and the tapping up business, then we really would be missing the bigger picture.

Which is this: we are now two points from the relegation spots. We have three home games in the following eight days, two of which represent our games in hand. Lose more than one and we could find ourselves buried deep amongst it, our hopes for the season lost like a battered old cricket ball in an untended hedgerow. With it seemingly out of reach, entangled in the brambles, have we the inclination to try and retrieve it; to pull our sleeves up over our hands, dig in amongst the thorns and nettles and maybe suffer a few scratches and nicks, or will we poke at it listlessly with a stick before ultimately giving up and going home?

The next eight days will almost certainly be pivotal in working out where we go from here, and who with.