So, we were on a seven game unbeaten run, we’d just beaten fellow pre-season favourites Chelmsford away from home, looked in decent order and all the panic and disgruntlement from our abject start had largely faded away to a memory. Naturally, we capitalised on this relative equilibrium and that terrific confidence-boosting win at Chelmo by hosting Hampton & Richmond at home and being 57 varieties of awful.

In that game, we weren’t helped by the fact that we had two men (Craig Watkins and Jay Conroy) sent off in one go. Then again, the fact that Hampton had had two tunnelled in the same incident, the ref quickly beginning to look like an amphetamine-chewing Hitler saluting autobahn traffic in the Friday evening rush hour, didn’t exactly give them a helping nudge either. Some teams clearly prepare for life as an IX rather than an XI, and we are not one of those. 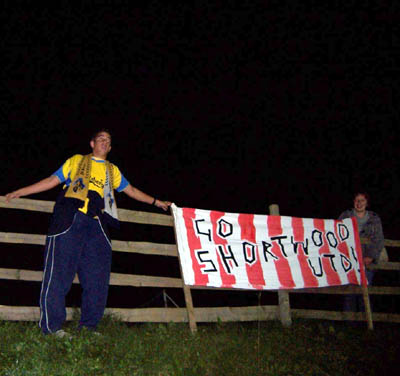 Sendings off have become the norm in our games though, although mostly with opposition players being sent to get first use of the soap. However with cap’n Jamie Collins dismissed at home to Bath, then Craig and Jay, we’ve been doing our best to catch up. All in all then not an ideal build-up for our first return to FA Cup action since late January. Never before have we played in two FA Cup tournaments within the same calendar year, but given the chance to do it again, I think we’d say “yeah, go on then.”

FA Cup success has not alleviated our desire for more of the same, despite recognition of the fact we could hardly complain if we saw nought of the rounds proper for some years to come. However, while you might have forgiven us fans a rakish swagger as we approached the second qualifying round once more, the combination of a sound Hampton hammering, injuries and suspensions meant even being drawn at home to Hellenic League side Shortwood United, from three divisions below the Conference South, could not be seen as a nailed-on home banker.

After all, if we can put four goals past the eventual champions of the league three rungs above ours, then who are we to call as ‘impossible’ Shortwood’s mission. However, while our terrace swagger had become an edgy tip-toe, it seemed our players were dismissing Shortwood’s very organised and motivated threat, carrying on like big-time-charlie FA Cup cocks-of-the-walk. Which is weird when you consider that of the XI that started against Shortwood in that original tie, not one of them started the game at Anfield eight months ago. There are several injury, suspension and substitute explanations behind that, but there has been plenty of change since then both long- and short-term. 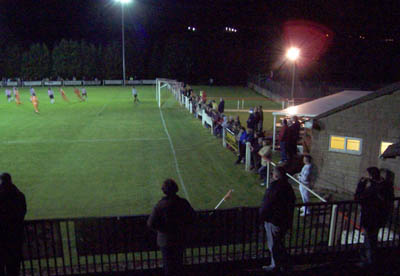 In the short, keeper Kevin Scriven had been dropped for his part in the Hampton defeat and replaced by former Hawk Academy keeper Nathan Ashmore, while the previous week had seem the final departure of our goal-hungry hero of recent years, Rocky Baptiste, who has gone to join his Anfield strike-partner, Richard Paquette, at Maidenhead United. We will miss his goals, his hair (in Afro and cornrow form), his genially languid manner and the fact that his real name was Jairzinho. To update our terrace chant - “We had Jairzinho, we had Jairzinho…”

In his stead, Jamie Slabber was recalled to the side alongside the still-recovering-from-injury Paul Booth and Craig Watkins. However, all this tinkering, combined with a lacklustre second half performance meant that Shortwood were able to battle and grab a deserved second equaliser in the final minute to force a replay. To keep up recent appearances, both we and they had a player sent off, although both teams planned to use the fact that ITV Local were recording the game to appeal the decisions. Everyone in West Leigh Park, the Shortwood manager, even the referee himself (having seen the footage), believed the decision to dismiss Gary Elphick to be harsh but, sadly, a ref’s sackcloth-and-ashes contrition is no longer enough and we have to pay the FA to adjudicate on his behalf. Not since the Communist Party’s office ‘Secret Santa’ has there been such a keen seeking out of red tape. So, back to the yellow fruit casing-ridden Meadowbank ground it was. As Salisbury fan Dave Todd suggested on the Tinpot Terrace forum, compare this to our last FA Cup away tie and you have the magic of this competition summed up. However, as nice as it is to visit any new territory, big or small, we as partisan supporters don’t want to be losing to teams you can call, as fact rather than as derision, a village side. Especially when they’re not even the biggest team in the village, Forest Green Rovers having punched above their weight in the Conference for several seasons now just a couple of miles away on the other side of the valley.

Prior to last year’s cup run our biggest scalping had occurred in this very parish, beating FGR 2-1 in the quarter-finals of the FA Trophy in 2003, so the last thing we wanted was to have our vivid memories of Nailsworth tainted by potentially our most calamitous Cup result to date. With Kevin Scriven and Luke Nightingale recalled and Jay Smith returning to the side in a relatively unfamiliar midfield berth despite his unsung utility, in the most part to plug gaps, it is understandable that neither supporters or players looked anything other than nervy in the first half. 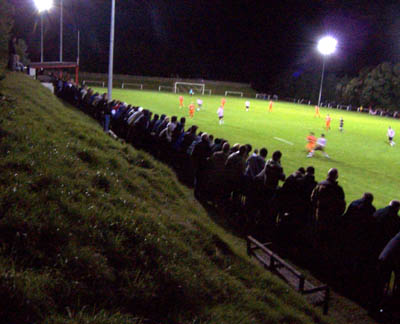 With a good sized local crowd in, considering their usual Saturday average of 66, one having fashioned a rather handsome flag glued to a couple of planks, there was a concern that the FA Cup could turn this quiet Gloucestershire village into a cauldron of hate. Thankfully, everyone retained their good nature, although this didn’t stretch to the Shortwood team giving us an easy ride. Spiteful bastards.

At half-time no goals had been scored, despite an Ian Simpemba header that had looped against the bar. Our performance was so lacking in domination, had Shortwood been an over-worked bank-manager keen on dungeons and spanking, they’d have unzipped their leather mask, snatched back the roll of tenners from the rack-side table and wearily gone home to their wife.

The silver-lining was that for all their resistance, Shortwood were creating little and after half-time, we upped our game a touch as we attacked the far end, another header hitting the woodwork five minutes into the second period. However, all our chances were coming to nothing, crosses and headers whistling just out of range. This was causing us to cup the back of our heads with frustration or, for those of us busy texting the info to absent parties, to use our free hand to Stan Laurel in disbelief [see below]. 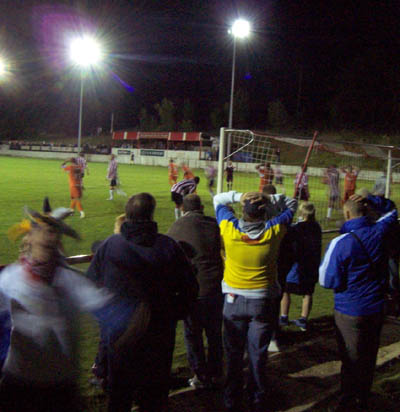 We were able to relax a bit with twenty minutes to go as Gary Holloway, arguably our most consistent player thus far this season, put us into the lead, tidying up after Gary Elphick’s header had been tipped up onto the underside of the bar by goalkeeper Martin Pearce. With five minutes remaining, Craig Watkins had the chance to kill it going one-on-one with Pearce, but sent his shot wide, as is customary.

Into injury time, Shortwood pressed forward, Chris Davis getting into the box and going down under the challenge of Ian Simpemba. With a 23:15 train to catch from Swindon to London to catch and even a lift direct from the ground probably not enough to make the connection if there was to be extra-time, I sucked up a breath probably sharper than most as the ref signalled a penalty kick. Thankfully though, Scrivs guessed correctly and within a minute, time had been called and I could look forward to not only a third qualifying round meeting with Godalming Town, but also to not having to kip on a bench in Swindon bus station.

For which I am forever in Kevin Scriven’s debt.

Links
Havant & Waterlooville website
highlights of the original tie on ITV Local
Posted by skif at 12:01 am

Hi I have a groundhopping website it would be great if you could add me to your links page.