First in a new feature. Before I was hooked by Havant & Waterlooville back in 1999, I had spent several years notionally following Southampton, for reasons I will go into at a later date.

When I was a kid, between the ages of 8 and 14, I was quite fervorous about it, despite only going to The Dell once or twice a season on average. Nowadays I care not a jot about them Saints having totally moved on, which does call into question that initial 'passion'. Not that I regret it, I just wish I'd discovered H&W , or rather Havant Town as it would have been, a lot earlier.

Living in Havant, life would have been much easier if I'd followed Portsmouth, but then again if I followed that path, I probably wouldn't be following H&W now, so perhaps it was part of some kind of grand scheme.

However, it was quite an obsession back in the mid-to-late 80's and early 90's; keeping scrapbooks and all sorts. One regular gambit of mine was to badger players with questionairres and requests for autographs. Having rediscovered these in a the back of dusty cupboard recently, its time they were put to some vague use.

These will appear every now and then, giving you the opportunity to delve into the psyche of pre-Premier League top-flight footballers, or at the very least realise that, even from that early age, it was very clear that I was not cut out for incisive journalism.

However, you will find out that Iain Dowie equated his Masters degree to the goal he scored against Crystal Palace that enabled Luton to avoid relegation; that Jimmy Case liked to call Tim Flowers 'George from Blackadder' and that Neil Ruddock hated Orville, but liked writing with a thick permanent marker.

You will also come to realise that I found the fact that Saints had two Russians in their squad almost mystically exotic. Which is quite revealing, I guess, when you consider the average Premiership squad nowadays.

To begin with though, we've gone with a man who played for both Southampton and Portsmouth (as well as the Rep of Ireland of course), Alan McLoughlin. What made him tick in December 1990? 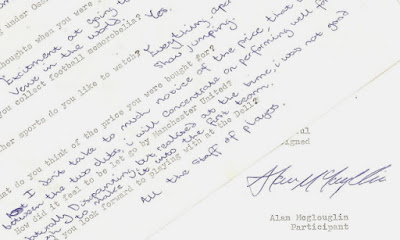 Would you still have joined Saints if Swindon hadn't been in financial difficulties?
Yes, because Southampton is a very good attractive attacking First Division side, which will hopefully fit in well with my style of football.

Who signed you for Swindon?
Lou Macari

Did you like playing under Ossie Ardiles?
Yes, very much.

What were yout thoughts when you were picked to go to Italy?
Excitement at going to the greatest footballing venue in the world.

What other sports do you like to watch?
Everything apart from show-jumping

What do you think of the price you were bought for [£1m]?
I don't take to [sic] much notice of the price, that is resolved by the two clubs. I will concentrate on performing well for Saints.

How did it feel to be let go by Manchester United?
Naturally disappointing but realised at the time, I was not good enough to make it into the first team.

Who do you look forward to playing with at The Dell?
All the staff of players.

Do you have a collection of opposing shirts from big games?
Yes

Do you keep a personal record of your performances?
No

How will it feel linking up with Russians (Alexei Cherednik and Sergei Gotsmanov)?
[Unanswered]

What is your favourite TV programme?
Too many to mention.

Do you like to see videos of your performances?
Only if they are good games, but its good to look at your nightmare games and try to learn from all the mistakes you made.

Would you have liked to play for England?
Opportunity never arose, never was selected for England Youth trials etc

Did you want to leave Swindon?
Yes, at some stage of my career, of course.

Have you ever wanted to play abroad?
No, not really.

Alan McLoughlin @ Wikipedia
Posted by skif at 12:01 am