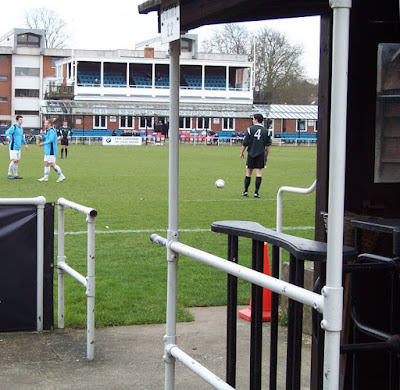 
>>new music stuff, also appearing on the Art of Noise

Behind their trestle table console, Rob Barber can relatively calmly jep and bwat at his electro-drum box, and Mary Pearson, stood close by singing softly, is also caught within a tranquil twitch.

High Places’ percussive bent is certainly the first impression they emboss upon an audience, the polyrhythms created by Barber’s beats and the gentle rattle of the backing tracks intertwining like competing vines adopting different spirals to ascend the same drainpipe.

Pearson adds to the shake and shickle with a bracelet of bells and while her contributions, including a yielding but deadpan vocal that merges seamlessly with the general ethereality, are festive and fairytale, the combination with beats of tribal repetition as well as of Soca-like steel-drum abandon make their set like the early stages of some enchanted freakout.

High Places’ sound is both of land and sea. When watery, they are like a depth-diluted Coral Reef Cantina Band, the vocals often largely hidden in the mix due to the rippling belly-splash of the drum-work. At other times, it has a sprightly seclusion, like an isolated forest, but one that has not been naturally created; a kind of woodland mechanics where dandelion seeds tickle like toddlers yet also scrape the skin like bright new pins.

It is with a juvenescent coyness that New Bloods assume their positions, circling around one mic to the left of the stage, like a young, feminine Travelling Wilburys given to hanging around the kids playground after dark for exclusive use of the swings.

They begin with a short acapella number that barely acknowledges its audience, butyet instantly captures their attention. Perhaps it is the frailty and the honesty of the human voice working alone, or in delicate harmony, that makes it so much harder to ignore than instruments amplified to inner-ear troubling levels. To open with this suggests New Bloods know how to pace a set.

Falling into their more usual role as players, they still use their three voices to good effect, working with and against each other as each situation sees fit. However it is bassist Cassia Gammill who is the regular lead immersing a robust vocal anchor to the click and flip rhythms that smooth the serrations of post-punk and dub-soul and slides them alongside the unpolluted, endeavour-driven folk-funk.

They are a school assembly !!!; a Gil Scot Heron if he was to become sonneteer-in-residence at K Records; an Electrelane for a relatively sedate venture scout campfire freakout. While the non-linear escapades of Adee Robertson’s drumming and the keen sweep of Osa Atoe’s violin might occasionally start to blur songs together, they have a sound which can fuse the responses of the head, heart and feet, which is by no means an easy combination to get right.