Like the titular character in Orson Welles’ Citizen Kane, Australian cricketers are quite fond of an old sledge. This we know. We also suspect that while they can dish it out, they’re not so keen to take it. There is a story that stroppy, but frustratingly good, bowler Glenn McGrath once tried to get under the skin of West Indian Ramnaresh Sarwan by asking “So, what does Brian Lara’s dick taste like,” to which Sarwan apparently replied “I don’t know, why don’t you ask your wife?” Glenda was not pleased; giving out the jabs there, but proving to be a chinless wonder when the punches came back. It would appear that Eastleigh FC have a man of similar character.

As reported on these pages, during the first grudge match between the sides, following Eastleigh’s capture of the grumpy eraser-headed Ian Baird; the sicknote-scribbling Matt Gray; the crab-eyed Gareth Howells and the, err, knobwad Fitzroy Simpson, the latter decided to goad his former fans (I use the term loosely as I, and many others, always thought he was a coasting waster) with a t-shirt that referred to the on-going Tom Jordan transfer saga between the two clubs. “See you soon Tom – EFC” said Fitz’s t-shirt. However, here we are five months later and Tom remains an H&W player, albeit only in a contractual sense, despite being on the receiving end of more tap-ups than a bidet warehouse. Let me bring you back up to speed. 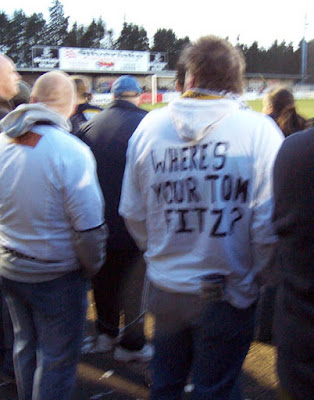 Tom had a pretty weird couple of months through December and January. After coming out in the press demanding to leave for Eastleigh he was forced to the sidelines and was even on the end of a “Jordan, Jordan, what’s the score” chant from our supporters after we’d beaten the team of his dreams three weeks later. However, within a fortnight, he found himself back in the side thanks to the long line of the injured and the cup-tied. He scored the game-sealing goal against Swansea at home in the FA Cup of course, but his first start in front of the home supporters that had voiced their clear disapproval in December came against St Albans City the previous Saturday.

It’s certainly rare for a centre half to score his sides first two goals in any game, but under these circumstances it was just bizarre, even before you consider that the second effort was no set-piece-centre-half-big-‘eader gambit, but a shot from the edge of the box using the outside of his foot. If it had been Cristiano Ronaldo scoring it, Ronnie would certainly have considered going on one of his ‘I really can’t believe how great I am. And I am’ Marco Tardelli-esque celebrations straight afterwards. 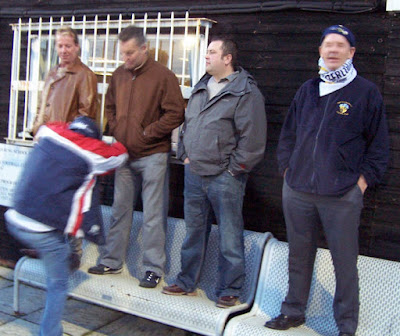 After his first goal (byline-cross-centre-half-big-‘eader) Tom didn’t know quite how to celebrate, leaping up as though to punch the air but halting as though having himself been the recipient of a punch in the face half way up. However, the silence he was expecting was not forthcoming. A decent smattering of applause, albeit from a crowd that murmured like a swamp afterward, and a smattering back, and all was moving in the right direction for the otherwise shaky Jordan/Hawkmob love affair. And then he had to go and spoilt it all by saying something stupid like “I love Eastleigh” or, at least, “I still want to go there” later adding “and I’ll happily miss playing at Anfield to do so,” like this made it noble and not hat-stand mad.

Anyway, following the end of the cup stuff and the return of Gary Elphick to the equation, Tom has returned to the stands, occasionally being ‘coaxed’ into comment by the local press, and sometimes sending his Dad, Dour Joe, to fight his battles for him, reporting us to the PFA at one point, I’m told. The PFA apparently found us perfectly within our rights to demand a fair price for a contracted (and regularly paid) player, a price that Eastleigh were unwilling to pay, preferring just to unsettle the player to the point where his position became untenable. Doesn’t mean we’ll be giving him away for pennies though. Whether we’re shooting ourselves in the foot with this policy remains to be seen, but one mustn’t give in to bullying types. Nor squinny Daddy’s-boys. 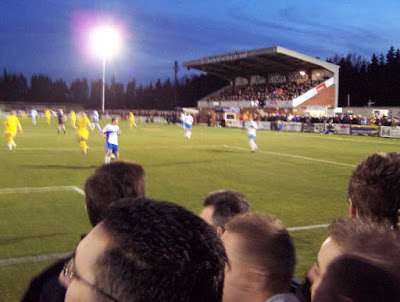 So, anyway, back to Fitz’s t-shirt. One of my H&’Dub colleagues, McMalc, had known Fitz well enough during his time with us to banter with him, sometimes even by text. So, with mockery in mind, albeit with more than a touch of point-making attached to it, McMalc went to show Fitz his newly defaced t-shirt; his reading “Where’s your Tom, Fitz?” On seeing this, Fitzroy apparently chucked the toys out of his pram so fast it was like watching a stricken hot-air balloonist discharging ballast. Fights in car parks were reportedly offered by our erstwhile touchline ambler, tooled-up only in the sense that he himself was there.

This is not to say that all of Eastleigh’s hangers-on espouse the classlessness of the nouveau riche, although we can confirm that one of their goalkeeping coaches does. Not lovely old Wayne Shaw, who played a good number of games for Eastleigh in the Conference South despite being profit-eater-in-chief at his ice-cream firm and, as a result, being built like the bolder in ‘Raiders Of The Lost Ark’. We like him. Sadly, I refer to one of our former charges, Gareth Howells, who broke the golden rule for pro and semi-pro players and staff in leaving a bitchy comment on a fans message board. 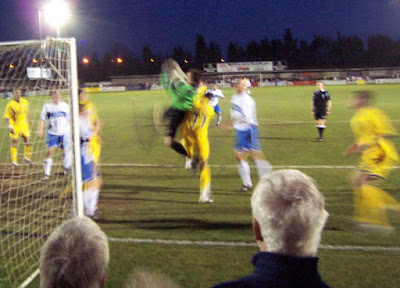 We had a thread on the H&W board referring to a question and answer forum the club were hosting for fans to quiz manager Shaun Gale. This was advertised as ‘An Evening With Galey’ which did suggest that our gaffer was going to be turning out in a pink ruffled shirt to tell a few bawdy gags before crooning through “Galey’s Golden Hour – some tunes we all know.” Which, frankly, I’d have paid very good money for. However being that it was just his unplugged and acoustic Q&A set, the comment left by ‘cat’ was that those attending should “take a pillow and duvet.” He’d have gotten away with it too had it not been for that pesky forum administrator, who was well aware of what email address had been used to sign up for the ‘cat’ forum account. Busted!

Still, we can only offer our pity. This was, after all, coming from a man with a face like a twitcher’s hide. I guarantee, you look into that deep, dark recess in the middle of his mush there, between his forehead and his gob, and you’ll find a number of bearded, freshly retired birdwatchers peering back at you through binoculars, hoping that you were going to be a white-throated needletail. Honestly his eye-sockets are so deep-set in his skull, it’s frightening. I imagine, though, that he sees the world just as I do. If I happened to be looking at it through a couple of toilet roll tubes. 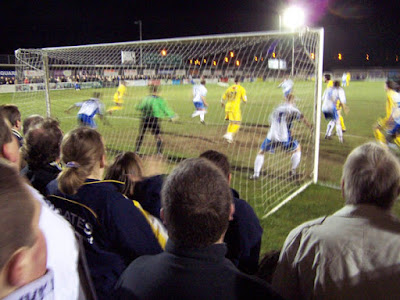 So, needless to say, this game’s fire didn’t need much extra stoking and, as such, a big crowd rocked up to have a look. Eastleigh are famous for embellishing their crowds, often declaring hundreds of sponsors tickets they’ve handed out (but which haven’t been taken up) but their call of 1,255 seemed about right, of which at least a quarter were following the Hawks. All this made for a pulsating atmosphere which never over-heated in an unsavoury way.

The problem with Ten Acres is that it was, until fairly recently, hosting Wessex League football, and although a lot of work has been done since I was last here (in 2002 watching them playing AFC Totton in the Hampshire Senior Cup, a night which saw one of Matthew Le Tissier’s handful of post-retirement appearances for them), the far side and the ends are not currently built for comfort. Behind one goal is a pre-fabricated set of seats that, frankly, are never going to be sat in, while the flat standing along one side (the cover provided several yards back from the barrier) feels like it dips backwards so that if you’re three-deep, you can barely see a thing - unless you commandeer some space on a bench of course (see pic). It’s much the same behind the car-park end goal, where I spent most of the first half on tip-toe, despite being 6’4”. 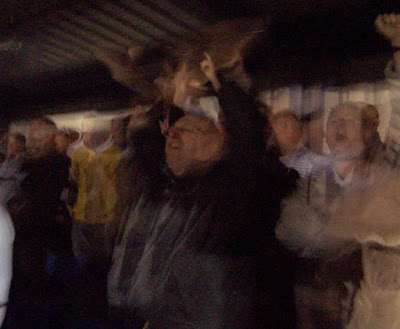 That complaint aside, the ground at least bore witness to a pretty decent game of ebb-and-flow football between two teams determined to give no quarter. It remained scoreless at half-time despite good chances for both sides. It looked as though neither side’s defences were going to be breached at all, that was until the 76th minute. Recently arrived substitute Gavin McCallum sprinted into the box and levelled a pin-point cross for Rocky to head home from close-range. The whole thing in wonderful slo-mo. Perfect, and thus bedlam, as you’ll spot from another set of blurry pics.

However it wasn’t to last long, their equaliser coming with seven minutes left. A dawdling Rocky found himself dispossessed, and the ball was swiftly despatched to the box where Paul Sales was on hand to crack a shot past Kevin Scriven. Thus the points were shared, but we can at least point out that Eastleigh have still yet to claim a victory against us in nine attempts. 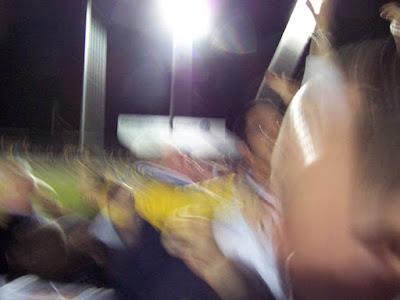 Yet the truth of the matter is that while we’ve shaded the battles, it looks as though Eastleigh may win the war. It will take an astonishing collapse for them not to be involved in the play-offs, whereas this dropping of two points may well now make the ask too big for us. Not that we can really pinpoint this game as the pivotal result. Losing 1-0 at St. Albans, who are scrapping away in the relegation mix, the previous Saturday was much more disappointing. Against Eastleigh, we thought we shaded it; they thought they did. Read between those lines and you’ll probably gather that this was as fair a result as they come. To think more positively, the season is not over and more of the same commitment in the remaining six games combined with a touch more accuracy from the shooting boots and we could sneak in there at the last. Away games at Bromley and Newport County in the coming week will be the acid test

If one image will stay with us from the evening, it is perhaps the reactions within the Eastleigh dug-out after their equaliser. Ian Baird, his pink head looking like the inside of a steam-ironed scrotum, came bounding out like his team had won the league. However we should perhaps find that understandable considering we Hawks have spent the last few months deriding his moral fortitude as lacking, his leadership style as flawed and his scalp as looking like a back-to-front ball-bag.