Behind the Hampton & Richmond bench, over the fence to the rear of manager Alan Devonshire, his staff and subs, was an old woman in a Hampton hat, gripping her talon-like fingers over the lip of the hoarding fence so as to hold out her H&R scarf at full stretch. By doing this she kept it as straight as a bible-belt Republican and, thus, maintained the visibility of all the many words on it. Nothing wrong with a long old team name by the way, but it seemed a very awkward position in which to keep ones arms. Perhaps she had dropped the scarf in a puddle and was trying to dry it out, only she has a thing about keeping her washing perfectly horizontal.

More likely is the fact that she is keen to display her civic pride, making sure that when the players look over to get a tut or a glare from the manager, she’ll also be in their field of vision. Behind the growling gaffer there she’ll be, with a kindly face that reminds them of their Nans; sporting a proud smile that offers reassurance, a block of Londis ice-cream in the freezer for their next visit and a tenner towards a night out “with that nice young lady you’ve been courting”, all at once. 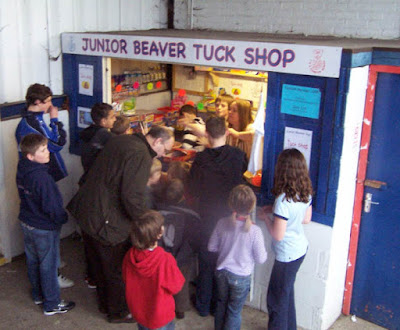 Ol’ Nan is vocal, into it, and seemingly about as hardcore as they come. Just along the fence to her left, though, were a couple of much younger women, both with North American accents, whose interest seemed a little more superficial. “Number five has the nicest ass,” says one, “nice and tight,” referring to Hampton centre-half Rob Paris. It might be easy to scoff at this, especially if one were keen on a little light xenophobia or misogyny but, to be honest, I envy those ladies.

How much easier would watching my side be if I could tune out and just dreamily ogle the shorts-eating cheeks of the protagonists? Damn my troublesome heterosexuality! Saying that, I did bang on a bit about bottoms on these pages a couple of years ago after Richard Pacquette joined the club. I can’t remember exactly when Richie first turned up; all I can tell you is that the arrival of his toes preceded that of his behind by several minutes. Oops, there I go again, my Richie P arse-jokes ‘swear’ box has just clinked into life after a couple of years gathering dust. 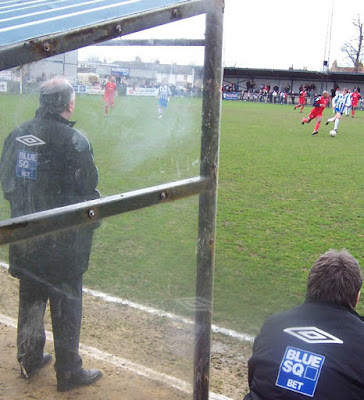 Mind you, if I’m contributing coin to it once more, I should probably rattle the tin in Charlie Oatway’s direction as well, our assistant manager having seemingly taken on the baton during the FA Cup run by suggesting to BBC Online that Rich had “a lot of junk in his trunk.” I’m assuming that means he has a pronounced curve at the stern anyway. I’ve been trying to think of what else it might mean, and I’ve come up with three further possibilities.

a) He’s been constipated since pre-season.
b) He’s just after saying goodbye to the circus (with a trumpity trump, trump trump trump).
c) He’s a 21st century rag-and-bone man who likes nothing more of a Sunday morning than to blow his performance bonuses at a couple of boot sales

I imagine none of those are correct, and my original thought is the right one. Anyway, in amongst all this fun with our forward’s fundament, I should probably tell you about the game which occurred. 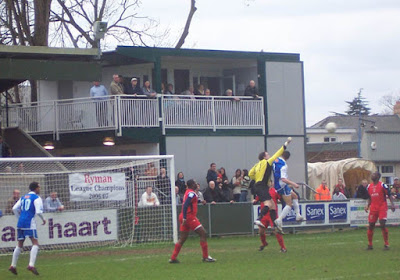 Despite playing three strikers in the attempt to get right amongst it, the game didn’t start particularly auspiciously, with the Hawks going behind after six minutes. First a slip, or rather a sticking of Neil Sharp’s studs in the turf, followed by a stillness in the Hawks defence across the board. Honestly, you’d not see as much serenity in a group of octogenarian country vicars on a beach holiday. This allowed Lawrence Yaku to nip through our backline’s stasis and curve a shot past Kevin Scriven into the bottom corner.

After that, aside from a Jamie Collins long-range shot that dipped over the bar, and a chance for Rocky Baptiste that Hampton keeper Matt Lovett had well covered, the Hawks looked pretty lacklustre all the way up to half-time. Considering we capitulated 3-0 at home to the Beavers earlier this season, I took only a sense of foreboding into the tea-bar queue. 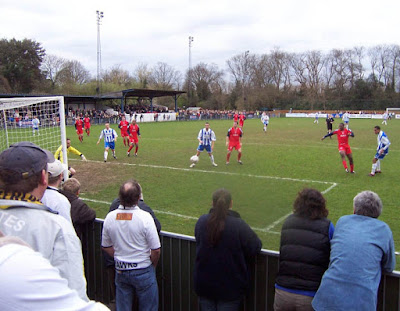 Whilst in that queue, I was asked by my compadre Adrian who I would rather come up to Conference South through the Isthmian league play-offs next year, AFC Wimbledon or AFC Hornchurch? Before I could say anything a scarfed-up Hampton fan ahead of us joined in, and seemed fairly well informed, before he ruined it all by asking “Did you enjoy Stockport then?” [Quizzical look from me]. “Stockport. Wasn’t it? You are [an] Eastleigh [fan] aren’t you?.” Yes. Cos this is where I’d be if I was.

Saying that, considering Eastleigh were mid-way through an eventual 4-1 home defeat to Hayes & Yeading at that point, they may well have fancied a trade for an afternoon watching us at the Beveree. It would have given ‘em a chance to put faces to names of all the players their management have been tapping up of late, if nothing else. Still, 4-1. Tee hee, etc.

I would have loved to have seen my own face upon being asked “You are Eastleigh aren’t you.” I think my eyes did bulge a little, and this appeared to convey the message effectively. That message being “Eh? I can’t even BEGIN to tell you what’s wrong with that.” Fear not, readers, given that you’ve had the time to read up to this point, I’m assuming you have plenty of it on your hands, so I’ll tell you instead. 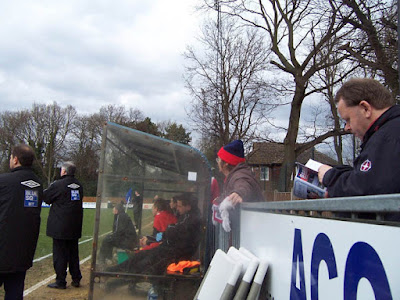 First of all it’s factually wayward, Eastleigh have never played Stockport, nor have they ever had a cup run into the propers of any description. We have (I may have mentioned the most recent in passing once or twice), but didn’t play Stockport. Staines played Stockport, and beat them, before losing to Peterborough.

Secondly, it appeared to suggest that he had been wheeled into the ground whilst in a coma, before making a miraculous recovery during the first half and thus completely oblivious to his team’s opposition. His wife was more up to speed, saying “no, they’re Havant and Waterlooville” in a way that was both sweet and instructive yet also managed to convey an unspoken, “…you knob” that couldn’t have been clearer had she taken a step back behind him and opened up her coat to reveal an ‘I’m with stupid’ t-shirt.

Thirdly: Eastleigh? EASTLEIGH? Of all the… Why I… How could… Git. Never have I been hit with such a bruising slur. I could be called grotesquely ugly, a eunuch or a vicious brown-shirted anti-semite but, I tell you, when it comes to stains cast upon one’s character, this one’s doing the lap of honour with the medals and the big bunch of flowers. 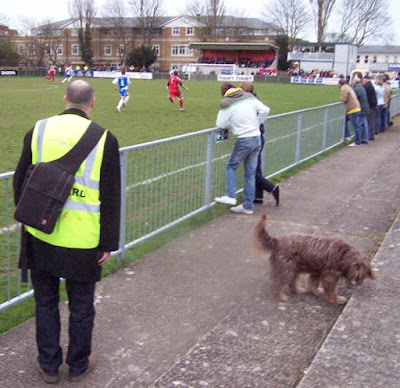 Still, he meant well, and once we’d sorted out who we were, and why we were there, I was able to talk about where we had actually gone on our cup travels, which always raises the feelgood factor by a couple of thousand notches, so I take it all back – it was a welcome boost after that underwhelming first half. Yet, from the manner we came bursting out of the traps in the second half, it appeared that there had been some therapeutic reminiscing in the dressing room as well during the break.

As an end result, we equalised eight minutes after the re-start and, much like the second goal at Thurrock, it was a Baptiste/McCallum combination. Their contributions were switched on this occasion though, with Rocky providing the run to the by-line and the ball across the six-yard box, allowing Gav to complete a nice and simple finish, his first for the magnificent H&’Dub on his first start. Hampton were a couple-of-inches away from a late winner, a cross zipping just in front of Ian Hodges’ outstretched leg (a leg, incidentally, that had been too injured to play in Hampton’s prior game due to its injuring in an incident involving an embankment, an old pair of trainers and a playful dog), but 1-1 it was to remain. 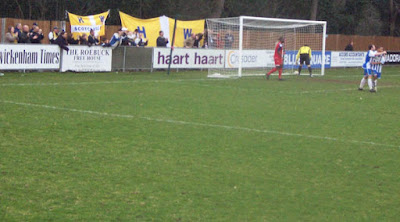 So it was a hard fought point that was certainly deserved, if not the prettiest spectacle, particularly when, due to the lack of cover behind either goal, it was watched for most of the second period under the continual spattering of rain. Still, we stood firm, and kept our eyes fixed on the game, unlike some along the far side I could mention, and have. Mind you, considering I managed to get another four paragraphs out of a derrière that only appeared on the field for the last three minutes as part of one of our substitutes, I guess I’m no different from those American ladies after all.