So, after bringing you the experience of knocking about Liverpool in daze that was probably only a couple of notches away from being a diabetic coma, the pragmatist within me needs to try and reset the parameters. So, welcome to West London. With apologies to Althea and Donna’s pop-reggae hit of the 70’s, see me in me Hayes and ‘Ding.

Not that one would describe Hayes as an Up-town, as such. Even the followers of Hayes don’t particularly like it much, their forums often attracting ‘…and that’s why I’m voting BNP’ style messages. Sadly, this type of attitude has also crept into their terrace chants on occasion and this, combined with their obsession with singing aggressively anti-oppo songs rather than pro-H&Y numbers, does little for the good name of their club, nor that of the more reasonable Church Road constituents whom will be relatively legion, but perhaps a little quieter. 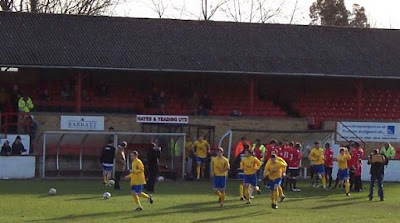 To be honest, despite priding ourselves on being anti negative-songs support, it’s fair to say we lapse from time-to-time, but this usually comes only as the result of severe provocation. However, Hayes & Yeading appear to delight in proactive antagonism. Well, I say Hayes & Yeading, but I really mean the former as, since their merger last summer, their integration does not appear to have run particularly smoothly, support-wise anyway.

Word has it that, when visiting our place earlier in the season, some of their supporters were heard to remark that they wouldn’t be getting behind certain players in their side because they had come from the Yeading background. Certainly, the word ‘Yeading’ doesn’t seem to appear in any of their chants, possibly because Hayes were the more vocal support, but more likely that the hardcore element remains less than impressed with the union, even eight months on. These are, though, early days, and every merger will have its bumps in the road to traverse. 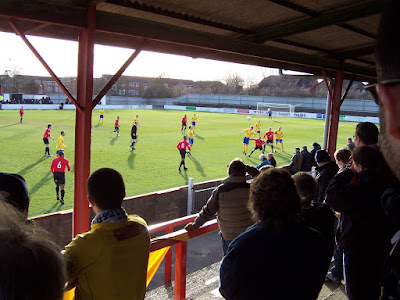 Based on this summary, you might wonder why anyone would want to go to Church Road to watch their football but, weirdly, I’d been disproportionately eager to attend this game. Well, for a start, the place is a proper old football ground; wide banks of concrete terracing curve around two sides, while a comparatively small stand peeps out over the player’s tunnel. A great pity then that the long-term plan is to move the club back to Yeading’s relatively frugal Warren, currently housing the H&Y reserves and youth sides.

Being back stood up at football (without being greeted by tuts from those behind) was also something to look forward to. While the rail-replacement-coach, excuse-me-driver-I-know-I’m-tall-but-my-knees-are-bleeding-profusely seating the previous weekend was all very nice, standing on steps, which can be back-heeled and kicked in moments of tension and frustration, was like Linus rediscovering his lost blanket, familiar and reassuring. Terracing was the ideal, soothing pair of comfy slippers to glide back into after our big weekender, havin’ it large in stiletto heels at the Anfield Road End. 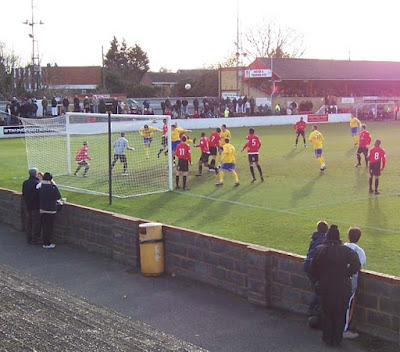 We might have taken 6,000 last weekend, but it was just as good to once more be amongst a travelling group of about 80 or so, the regular faces of course, plus a few that appeared new to Conference South away-days, which bodes well. Sadly though, if I might return to punning heavily on the lyrics of ‘Uptown Top Ranking’, in being back to the strictly (grass)-roots, “no pop no style” was a pretty adequate summary, at least for the second half, when we looked not only not at the races, but as though we were deliberately steering well clear of the entire racecourse, like an anti-gambling zealot with a horse allergy.

Gary Elphick, finally free of his cup-tied shackles, could return, but into a new three man central-defensive unit with Neil Sharp and Tom Jordan, whilst Wycombe loanee Steven Gregory could make his debut proper, following the Thurrock abandonment, in midfield. However, we were without both our FA Cup goal heroes from the previous week, both plucked from above as reward for their efforts. Alfie Potter was instantly recalled by Peterborough to fight for his place in their first team whilst, more unexpectedly, Richard Pacquette received a call up to the Dominica squad for their World Cup qualifier against Barbados. 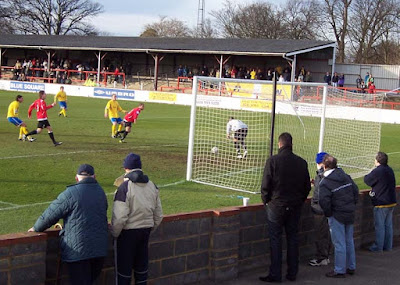 Not many loanees will leave their temporary home with the kind of grand repute Alfie now has, some ranking him as one of the all time H&’Dub greats. Alfie, in turn, reacted to his recall like an over-pampered Valley girl throwing a tantrum at their 17th birthday party when their present turns out to be a convertible in the wrong shade of baby blue. In this context, and this alone, this is a good thing. I had mentioned before about Alfie’s exemplary attitude for a young footballer being asked to slum it with the semi-pros, but phrases like “I’ve had the time of my life” take his reputation beyond prior precedent. Whether or not he added “…no, I've never felt this way before” went unrecorded. Personally, I think all departing players and staff should be forced into song before they drive off. Indeed, some of the bad blood that followed Ian Baird out of the door may have been assuaged had he only thought to break into a sweaty, tongue-waggling version of ‘Lip Up Fatty’ on the boardroom table before pissing off, but I guess now we’ll never know.

Anyway back to someone we still like a lot. Obviously pleased to be offered a chance to prove himself in League football, Alfie was nevertheless apparently “gutted” to be leaving us, keen to be part of what we all hope to be a late push for the play-offs. However, without his energy and invention, this may be one dream we don’t get to realise this year. Maybe we shouldn’t be greedy, considering, but our away form in the league defies belief, as did our away form in the cup, but in a very different way. 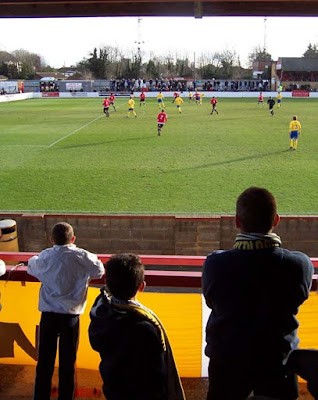 Whilst we can clearly keep it firm and athletic for those big cup games and for the majority of home league games, it now appears we need to employ some kind of pre-away-day fluffer to ensure the team remains pointed, perky and ready for action when on the road. Our 24 minutes at Thurrock and this game both proved we can do some good stuff away, but only apparently for the first period.

With Rocky rested and Big Rich deciding international football in the Caribbean was more attractive than coming to West London, Jamie Slabber and Craig Watkins began the game up front. Craig was keeping up his impressive recent form when given a chance, regularly beating the leggy Hayes & Yeading defence, but consistently being let down by his final touch. H&Y however caught us with a sucker punch in first half stoppage time. Justin Gregory conceded a free kick for handball, which Josh Scott was able to place past the wall and keeper Kevin Scriven. 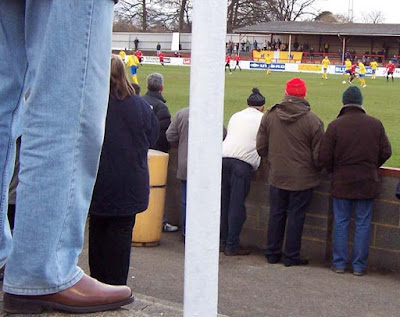 Against the overall run of play certainly, but rather than use this as a catalyst for a second half display of purpose, the H&W will, so evident in recent games, suddenly came down with man-flu. We thus collapsed to a three-goal deficit before the hour, James Mulley and Kieran Knight getting the goals. Yes, we scored, but even then it was the 90th minute and sub Mo Harkin needed two goes at it. Bumps, crashing to earth, all of that stuff. Big back-to-school feeling. The bringing-in-board-games and mufti of those mid-September days before the cup run began and we were, albeit briefly, third seems a very long time ago.

Now fourteenth, it really is back to the white board, but we’re essentially starting again in a new school. The catch-up fixtures represent our chance to sidle up quickly to the popular group that hang around behind the play-off bike-sheds, before the mid-table bullies get to tweak our nipples or, even more scarily, the relegation haunted kids convince us that chewing our hair and looking pale is the way to go. 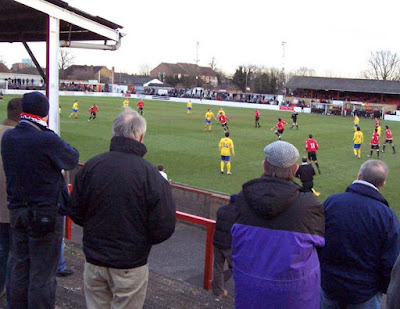 Prior to the game, Hayes & Yeading had given our players a guard of honour as they came out, whilst ‘Under the Moon of Love’ was piped through their tannoy. A very gracious acknowledgement of the service we have apparently done for non-league football as a whole with our Cup exploits. M’Hawk chum Simon did however suggest that this might be a subtle manoeuvre on their part to keep our heads in the Cup clouds, while they went about their stuff on terra-firma. If so, it was tactical machination that we couldn’t better.

Hopefully this will be the final aberration, and league-game focus will dribble back in like a barium enema into a digestive tract, highlighting problems and making the appropriate solutions abundantly clear.