Well, what to tell you. Frankly, we’re only used to reaching a certain point. Like a bunch of Jehovah’s Witnesses actually invited beyond a threshold for a lengthy discussion on the wonder of Jesus WITH both tea and biscuits thrown in, we’re really not quite sure how to handle this. These waters are certainly uncharted, so much so I thought I should ask an experienced maritime cartographer what he thought about it, and his response was to snap his pencil in two, burst into tears and then throw himself through a fifth floor window. 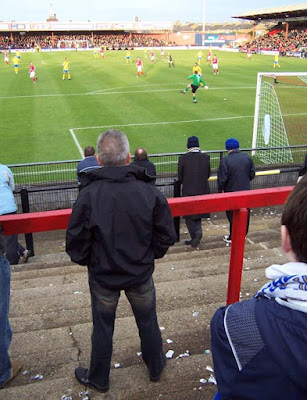 As the piece last week suggested, the first round of the FA Cup is the early season focus of pretty much every non-league club in the land that stumps up the fee to enter. There are, as I mentioned, a number of criteria for what constitutes a good draw should you get there, but frankly that’s as far as our thought process goes. We’ve never really thought about what happens should you get to the FA Cup 1st Round and actually win. Well, not outside of pie-in-the-sky conversations, your student-common-room-esque theoreticals, you know like 'what would you rather do, eat dog food or lick a Koala’s armpit?' That kind of bollocks. The focus has always been the first round.

For many, the game is the end in and of itself. Others, like me, view it as an opportunity for something bigger, something longer, to really pull all the pleasure out of it as is possible: the big weekend away. As the Spanish call it: el Bĩno. Thus, during the week after the draw, we poked into the dustier cupboards of the internet, to find a B&B for six of us. ‘Twas an ultimately successful gambit given that our guesthouse turned out to be just around the corner from their ground, which I shall refer to as Bootham Crescent, thumbing my nose at the marketing team at Nestlé Rowntree as I do so. 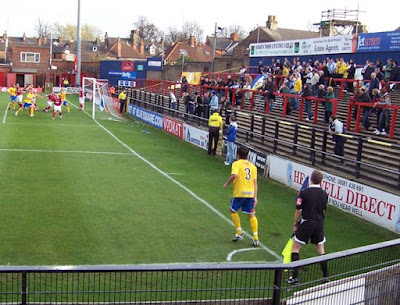 The majority of our support did the trip in a day, utilising the dirt cheap subsidised Supporters’ Club coach, or making their own ways from around the country. Both the St Neots and Bristol branches were in attendance, Hull and Newcastle had been starting points for some, while one of our lot apparently woke at 3am to start their journey, the first leg of which ended in Falkirk. I was part of the Hawks London Branch who came mobbed up, booking out the 10:30 football special out of Kings Cross. Well, Coach E of the 10:30 timetabled service out of Kings Cross anyway. Coach E seats 51 and 52. Ahem.

For those of us making a weekend of it, our aims were fairly modest. See the game; hit the town for a few drinks; curry; then back to the gaff to watch ourselves on Match of the Day. Indeed, prior to the match there was no bravado, no cheeky whippersnapper over-confidence. Excitement certainly, but mixed with the kind of humour you’d usually find trying to drown out the clack of knitting needles down by the gallows there. I think the 3-0 home defeat the previous week will have helped with that. 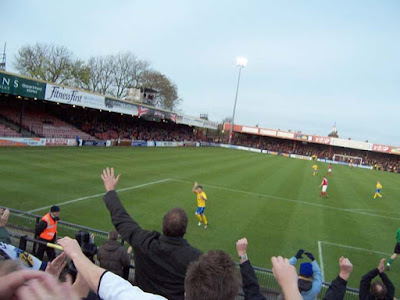 With the 1st Round kind of considered as the pinnacle of achievement, particularly when drawn away at opposition from a higher level, you come to enjoy the day, and hope there’s no humiliation. So, when a Jamie Slabber shot gets pushed [see pic above] straight into the path of an unmarked Maurice Presley Harkin, it starts to become quite different. Our Mo (you can call him Mo. Everyone does. We do. “Suuuuuper, Super Mo…” in fact) swept it beautifully into the top of the net. He then celebrated by giving we fans the kind of wave you would only usually offer to someone who’s smiling excitedly and shouting your name across a busy high street, but who’s identity you can’t…quite…put your finger on. Somebody from Boys Brigade? Somebody from Boys Brigade’s younger brother? That weird kid from middle school who once shat himself in assembly? Who knows? 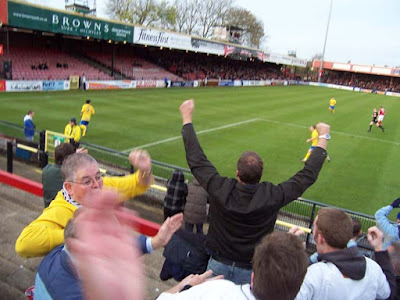 While Mo might be taking it easy on the euphoria, the away terrace is a scene of jubilation that easily matches the previous GREATEST! MOMENT! EVER! – our equaliser against Millwall this time last year – and sees my recently purchased and unsipped PG Tips tumble off a crash barrier, spilling its fluid like a felled soldier. £1.50 that cost me! Worth it though. At a million times the price.

Then it’s just a matter of watching the minutes tick down, the belief gradually rising like a Blue Peter appeal totaliser during a busy Bring & Buy season. First we made it to half time. We felt a bit sick, but happy, like after a debut puff on a Silk Cut. Then we have to undergo that particular torture that only segregation can bring. Having to watch us defend. However, with that we get to see Charlie Oatway knee the ball off the line, Brett Poate get his ‘ead in the way of a goal-bound shot after Kevin Scriven misses a punch, then Scrivs jumping on a ball late on that threatens to squeeze beneath him and in. The latter save is celebrated, by me at least, like it’s a second goal. 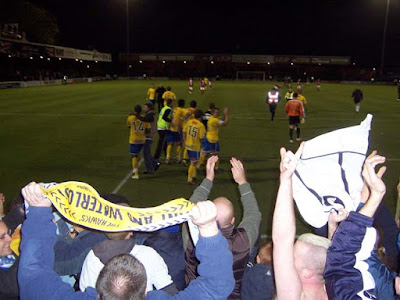 The four minutes of injury time held up on the idiot board by the fourth official was met with a brief tantrum but, by this stage, although the nerves were still there, the collective belief was enough to suck the team home. Upon the final whistle there was, of course, pandemonium, with the players coming to the fence to get some cuddling, to throw their shirts into the throng (that’s coming out of your wages, fellas) and to engage in a lengthy demonstration of mutual applause with us. We were still at it when York started to get a bit hacked off with all our post-match singing and began to dim the floodlights. It’s the opposite, yet the same as the lights-up at a gig that’s gone well past curfew. We’ll have to have our encore elsewhere. Watching the highlights on YouTube is certainly one way.

You can’t argue with York city centre for some instant extras though. Six jolly Hawks working their way down Micklegate. Let me provide a snapshot. There’s Mark, still brimming with excitement like a cub scout getting close to the top of the Tuck Shop queue; there’s Shaun, who’s starting to worry about a wedding he’s going to that coincides with FA Cup THIRD round day. That might seem fanciful but, well, now we’ve gone past the edge of the universe, who’s to say what’s possible? As if to emphasise that point, there’s Chris singing “Wem-ber-lee, Wem-ber-lee” each hour, possibly even on the hour, like a giddy alarm clock. 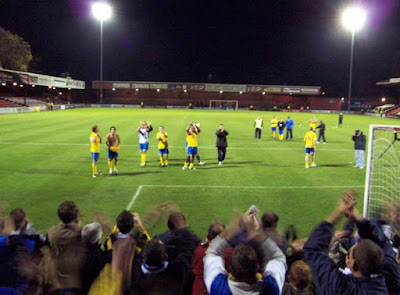 We’ve got Barry, who’s taking it easy having volunteered to drive the party of five all the way up from the grim south to the glorious north (100% record for H&W north of Grantham doncha know!) and back down tomorrow, particularly as he was asked, possibly at gunpoint, to begin his chauffeur duties at 5:30 in the morning. Finally there’s Adrian, known to regular Hobo Tread readers as watcher of muchos footballos in Central and South America, today, merely the toddler of our group. He’s a man with a healthy appetite for the booze, despite a body frame that resembles a collapsed ironing board stood upright in the corner of a utility room. Not, as a man of fluctuating weight, that I’m bitter towards thin people, you understand. However, he copes fairly well, being not so much pissed up to his eyeballs, but actually just pissed in and around his eyeballs. Speech? Fine. Not a hint of a slur. Strollin’ gait along the banks of the Ouse? Fine. He could traverse a balance beam with both a click of the heels and a gassy burp at the end. The eyes though? The eyes have it, one spinning clockwise, the other anti-clockwise, like breadmaker whisks pulling at fresh dough.

We expected it to be good, but thanks to Mo Harkin and a fantastic team performance all round, it was unforgettable. The best yet and, who knows there may be more to come. After a quick Sunday morning scoot round the National Railway Museum, it was time to head home to London, and time for another FA Cup draw. So soon? Oh sir. My, my. Excuse me while I put the back of my hand to my cheek and flutter my eyelashes coquettishly. 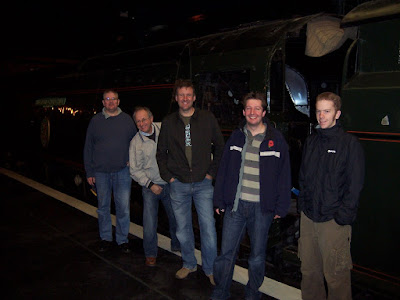 It is a forgiving draw too, not being cruel with a tie against, say, Weymouth or having to deal with the Millwall again, but handing us another great trip, to Notts County, not only a founder member of the Football League but one of the oldest clubs in the flippin’ world (and north of Grantham I believe). Ambassador, with these beanos you are really spoiling us. I mean, we’ve not only had our cake and eaten it, but our licked clean plate has suddenly filled from nowhere with another big, buttercream-laden sponge, fresh servings constantly appearing like ping-pong balls from a magician’s mouth.

It’ll be marvellous but, like I say, we really will be entering new waters in three weeks time. This is the Bermuda triangle, folks. I should say my goodbyes now as, after that, you may not hear from me again.

Congratulations Skif on your clubs fine victory, hope you can progress to the promised land of the 3rd round, Good Luck!!

This is the first time I've happend upon your blog and...whaddya know?...your lot are playing mine (Notts County) in Round 2.

I'm sure you'll be there. I see Meadow Lane is not on your list - an incredible omission! Although I don't blame you for not having visited the F-worders either.

The club shop is worth a look, and the mushy peas with mint sauce have to be tried.

We were on a roll under new management until Saturday's home defeat to...erm... Macclesfield.
If we lose at Lincoln this Saturday you can travel with a degree of optimism. Even better if you can organise a really bad run for H&W. We're experts at ending opposition losing streaks.

First time reader of this blog and ...whaddya know?...your lot are meeting my club (Nots County) in Round 2.

Meadow Lane is a notable omission from your list of grounds so I assume you'll be there. Not surprised you haven't bothered with the F-worders aross the river though.

Check out the club shop, mushy peas with mint sauce are the essential local delicacy and enjoy the game.

We were on a useful run under our new management duo until we lost at home to ... erm ... Macclesfield on Saturday.
If we lose at Lincoln this coming Saturday you can travel in hope!

Many congratulations on your superb win today Skif...you should have finished your half time PG Tips by the 87th minute today so you shouldn't have spilled it again today! Look forward to your report.

Every action has an equal and opposite reaction.
I can only applaud the H&W performance against my team on Saturday.
But watch developments at Notts County.
We are 6 games into a new management and already the fans want his and the teams heads.
We play Peterborough tomorrow and I predict that as a result of Saturdays abject performance there will be a crowd of less than half the "normal" 4,000.
I think we're looking at a club on the verge of going under.
Good luck in the next round.