The road to Wembley is, of course, littered with more banana skins than an eco warrior chimp’s compost bin. Ninety minutes from the first round proper and given the gift of a home tie against a team from two leagues below, you might think the slippery yellow fruit casing might loom large in our thoughts. However, I get the impression that we were never in any doubt. From the moment of the draw, there was less talk about the game against Leighton Town than there was about being in the bar at 5:15 after it to watch Sir Trev and chums pull out the reasonable-money balls on the plasma screen.

Admittedly there were some who made mention of the fact that we had indeed got an in-form Isthmian League Division One side to despatch with first, but I imagine this was out of politeness more than anything else. There was a pretty unnatural sense of breezy confidence wafting around West Leigh Park, which is fairly unusual at the best of times and perhaps unexpected in a season that has sputtered a little, particularly in the face of play-off expectation from our fans, and the league-winning expectation of us by fans of other Conference South clubs.

In the face of these expectations, and them not being met, Ian Baird jumped ship hours after our FA Cup victory over Bognor a month ago, following the trail of filthy lucre twenty-five miles up the road to Eastleigh, who seem keen to throw cash at provoking an intense rivalry with us, and perhaps using whatever’s left over to mount a promotion push. Not only did they pinch our gaffer, they made off with three senior members of the playing and management staff as well. To be frank, they only way they could have stolen more of our bench would have been to turn up in the dead of night to unscrew the seats. 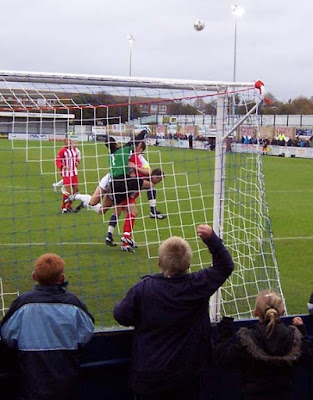 However, while initially Baird’s defection was met with shock, there was very little awe, and certainly no great disappointment to speak of. While we have made strides under his stewardship (and we were slipping away like a bobsleigh team with neither appropriate footwear nor indeed a bobsleigh under his predecessor Dave Leworthy) you could never say that we fans were the epitome of grateful satisfaction when there were blips. I was an Ian Baird fan, by and large, but perhaps last season’s play-off semi-final defeat on penalties was to be the acme of his achievements. His valedictory admission that he’d taken the team as far as he could was perhaps the one shard of honesty in another otherwise pretty duplicitous departure.

Mind you, he made a giant, dead-weight rod for his own back prior to the season in forcing the board to make an embarrassing u-turn on their winning PR gambit of flying in the face of football trend and actually reducing entry prices. He stated he couldn’t finance a league winning side on that budget and thus rather than a one-pound reduction, we instead had to wear a quid increase, taking us to a tenner for the first time. By the looks of the performances at the start of this season, neither was this enough. You could argue that he was spending our money unwisely, yet Eastleigh wanted part of his scattercash action and were happy, as I've mentioned, to let him spend their money on almost his entire H&W backroom staff.

When you examine who has gone with him though, you realise we could have only got rid of more dead wood had we offered to throw in the rotting timber from our long demolished old stand for an extra tenner. Firstly there was goalkeeping coach Gareth Howells. Mmm… how to describe Gareth. Ah yes. Guardian TV critic Charlie Brooker once described Ross Kemp as always wearing the kind of look that suggested he was trying to stare-out two knotholes in a wall. Now if you imagine those knotholes for a second, you’ve pretty much pictured Gareth’s trick-or-treat eyeballs. The upper half of his fizzog is so sunken, you could send divers down into it to scavenge for treasure. 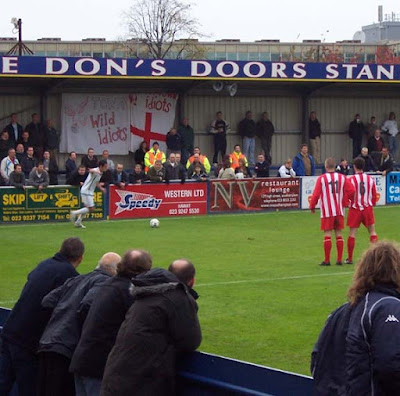 We have also lost Fitzroy Simpson. I could not be more ambivalent about our club losing a former international, and it’s not as if non-league is swimming in them. Here’s a couple of remarks I made about Fitz at the start of last year. From our 3-1 away defeat at Maidenhead: “Fitzroy Simpson, lest we forget a man who has played at a World Cup, is showing so little class that I’d half expect to find a faded sticker from Londis price-gunned to his leg”. From something quite similar at Histon two weeks later: “Fitzroy Simpson continues to equate playing in the Conference South with slipping into a cheeky thigh-length kimono and knocking back a pink gin”. The reason I’ve not mentioned him much in the eighteen months since then is simply because he’s rarely started, instead he’s been content to specialise in the stalking and sledging of linesmen. This made him a bit of a cult figure but quite an expensive one when you weigh that up against minutes actually spent on the pitch. I’m sure we could employ an ankle-biting Jack Russell terrier and achieve much the same for a great deal less cash (although a touch more Bonio).

Finally we have lost Matt Gray, who joined us two years ago, and played only 14 games, a man not so much on speaking terms with injury as indulging in pretty grubby phone-sex with it on a nightly basis. He repaid the loyalty we had shown him during his long periods on the sidelines (to be fair, he did quite a bit of scouting in that time) by pissing off up the road, possibly only so that he could keep attending the same slap-head survivor’s group as Bairdy. Gray will be Baird’s assistant manager despite the fact that Eastleigh have spun that their interim gaffer David Hughes would be returning to his player/assistant manager role.

It will be interesting to see how that plays out, particularly as ideally Baird wanted to take his assistant Shaun Gale with him to take up that position. However Galey’s been at West Leigh Park a long time now and considered what he had been part of starting (having been brought in as a player at the start of the Jenkins/Daish joint reign in the summer of 2000) was nowhere near to being finished, he decided to stay put. As a result, and considering the show of betrayal of one whom had demanded loyalty from his players, our board rewarded Galey’s fidelity by making him manager. To those of us who identified Shaun as being a little too close to recent underachievement, and wanted a putting out to tender rather than a coronation from within for a change, this may have initially seemed a little hasty. However one cannot deny that there was honour in it and, of course, despite our conversational and web forum grumbles, we have backed Galey from the terraces from the get-go. 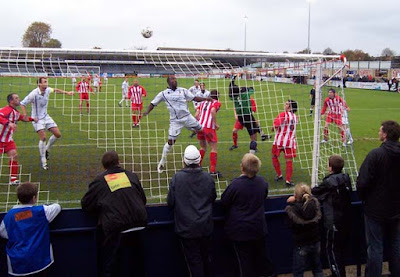 So far, the Gale regime has been unspectacular but, crucially, undefeated. Certainly there hasn’t been enough to make us in anyway haughty and superior in the face of lower-league opposition in a crucial cup tie, but yet there was none of the usual buzz that accompanies a fourth-qualifying round cup-tie. Not today, and not all week. No genuine excitement amongst the hardcore nor indeed the fair-weather who turn out for the bigger games. The theory seems to be, get this one out of the way, and come and see the first round game, which may well involve Leeds (this year’s must-have cup-tie). As a result, ours is the lowest attended game in the fourth-qualifying round.

As it turned out, of course, the players showed the right amount of respect and thus were barely troubled by Leighton, certainly not as much as we supporters were by their support. Well, irritated anyway. Calling themselves the ‘Wild Idiots’ (in a show of self-awareness that could only have been better captured if they’d all had the word ‘bell-end’ tattooed on their chins), they sang songs like 'Ten German Bombers' (only in the bar, mind) and generally made you proud to be, well in my case, partly Welsh.

Still, that irritant would have been much more grating had we not done a professional job, particularly so down the spine, with Charlie Oatway and Andy Gurney breaking and bustling in midfield, Kevin Scriven switched on in goal on the occasions Leighton left their half, and Neil Sharp strong in defence. It’s been gratifying to see Sharpy’s performances of late; a return to form that couldn’t be more evident even if he’d taken to turning out at centre-half in an ill-fitting school uniform.

Up-front, Rocky Baptiste and Richard Pacquette did their bit adequately as well, Rocky pouncing on indecision and a nervy keeper in the 35th minute to pinch-flick an opener, before a wonderfully angled header and a deft lob off the post sorted Richie out for a second half brace. Job done on the field then, and all into the bar as planned…

…but more on that here…

And not to mention all those omens which came good for the Hawks:

We've never lost a 4th Round Qualifying Round, I was bricking it at half time, Hawks undefeated under Shaun Gale, and Super U Nick of Sutton was in attendance, having never witnessed a Hawks defeat as a neutral fan.

I did almost make mention of your omens in the article.

I should probably point out that we HAVE lost a 4th qualifying round game before (to Barnet), but we've never lost at that stage to a lower division side. That's my omen of choice, but the Sutton turnout is always good. Good folks all around there it seems to me. Certainly hope they don't get relegated.

For anyone else reading this - mention of Adrian's omens was made in last years 4th qualie round article - http://hobotread.blogspot.com/2006/10/brackley-town-0-havant-waterlooville-2.html