It’s not all about yer Brimscombe & Thrupps here, not always a loving portrait of yer Greenalls Padgate St. Oswalds’, yer AC Pontymisters’ or yer Ifield Edwards’szizzes round here. It rarely is in truth, we don’t often stray far from the Conference South in the greater scheme of things. Below rung six particularly of the non-League part of the pyramid oft goes undisturbed by my footsteps. For all the grassroots pretensions of this site, your visit here will usually mean only that you’ll be squeezed between the blinkers of the non-League iceberg’s semi-professional tip. Amateur hour doesn’t go on and on, not here anyway.

However, that blinkering comes literally at both ends, as you’ll not get much from me these days from the professional game either. The Premiership all the way down to the Conference represents a bit of a Hobo hinterland as well, mainly owing to the price. However, if the League Cup is good for anything, it’s for the bigger clubs bringing their prices down. As such, to watch the Arsenal tonight from the stalls of their big new theatre, it’s a tenner, same as it is to watch the H&W in the Conference South. Mind you an added £3.50 internet booking fee is not something that tends to trouble the week-in-week-out Hawk follower.

It’s got me thinking though. People are willing to fork out 30 or 40 sheets a time to come here, and it would take roughly 110 H&W average home attendances, about five seasons worth, to fill it. I’ve not done my sums, but I imagine more people watch the Arsenal at home on a given Saturday than are watching the entire League Two programme occurring at that time. To me, that’s depressing, but you might have guessed that considering my usual ports-of-call. Success and star names are an undoubted draw for sure, but going on my experience here tonight, I really can’t fathom how you Premiership fans do it every week. Sitting, I mean. Well, that’s just it, some of you don’t. You bob up and down like a Whac-a-Mole at a Proms concert. 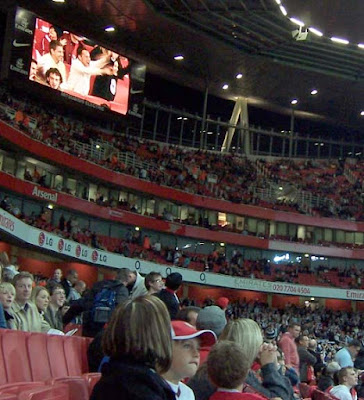 Now, I’ve always liked to think of myself as a laid-back kind of chap. However, there comes a time when the evidence becomes too irrefutable to allow the ego to continue to feed solely on pretence alone. So, yeah, I’ll stand up and say it. I’m yer Skiffoid and, yeah, people sometimes do in my handsome nut in a manner that’s disproportionate to their crime. People like co-workers who respond to you answering their queries about your football club and the level they play at by “aww bless”-ing like you’ve just whopped out, as a man teetering on the cusp of your thirties, your treasured Cabbage Patch doll collection, a gathering which you continually refer to as your ‘second family’. You can perhaps understand, considering my soundly patronised circumstances, why I felt like twisting a wine-box tap into their frontal lobe with my palm, before siphoning off the idiot juice in the hope of saving them from a potential punch-out in the future from a closet psychopath with a penchant for Pound Puppies. You will note from this, that I clearly arrest apparent anger with aggressive alliteration.

Some might consider the wine-box response indefensible. I present thus. Case for the prosecution: heavily pregnant lady. Case for the defence: squawky Australian. There’s not a jury in the land etc. etc.

The bobbing-up and down I spoke of earlier, particularly when sat in the shallow-raked rows of the lower tier, also provokes a gritted-teeth response. Especially when the main offender is in row seven, squarely in front of me in row eight, and is leaping up when the ball is in Gooner possession on the halfway line, let alone when a deep, searching cross hones in on the six yard box. Grrrr…. Now, the last thing any of you want to read now is another part-time groundhopper (My name is Skif and I’m one of them too) being all wistful and misty-eyed about crumbling concrete terracing, but at least you can solve sightline issues fairly swiftly there, by taking a jump to the left (or, indeed, a step to the right). Watching from terrace steps most weeks, particularly at 6’ 4”, means one gets used to a consistently unimpeded field of vision, and thus verge on the clothes-ripping Hulk-esque when matey in front becomes the dark DIY off-beat in my football strobe-light. 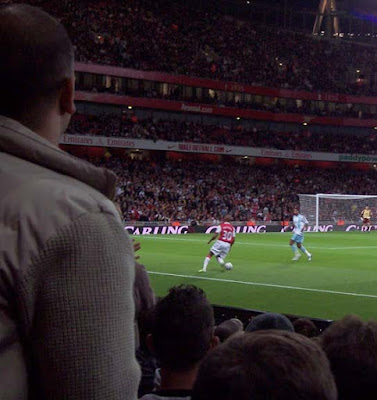 It is perhaps not the best of times when one becomes enveloped by a desire for the ready availability of some superglue. However, even in these moments of futile internal rage, my innate reasonableness shines through the dribbling fury. Y’ see, I wouldn’t be using said agent to bond the obstruction to its padded seat. No no. Rather, I would use it to fasten in place the heavy-duty steel springs I would have pushed into their fundament and its framing cushions. Thus they could then justifiably turn around and suggest that their incessant bouncing was out of their control. As a result, I could no longer have any permissible reason to remain outraged. Instead empathy and guilt would win out, and a night out at the League Cup becomes the middle class liberal’s busman’s holiday.

So, not being able to beat them, I have to sign up for ninety minutes of leaping about joinin’ 'em, to see how the Premiership other half live. Not that this is the best example of current top-league talent on display. Although one might argue that, instead, we do have a window into the future right here in front of us, given that Arsenal are once again treating the League Cup as their laboratory Petri dish. On the other hand, Newcastle are struggling with injuries and find themselves playing this fixture a mere fifty hours after a spirited home win over West Ham. As a result, the pre-school sandpit enthusiasm of Arsenal’s fresh-legged and pacey wunderkinds easily betters the heavy-eyelidded over-caution of the Toon’s five-man midfield, who play with all the bite of a vampire with a poor oral hygiene routine and a fondness for dolly mixtures. Skipper Alan Smith pads about the midfield for much of the game as though wearing a slightly too-roomy set of waders. In the second half, when Emre barrels on from the subs bench, he looks and moves like a kid that’s just been set free from three happy nights trapped in a Scout troop’s tuck shed.

Shay Given is, unsurprisingly, a shining light for the Toon making several vital saves. Conversely, in the midst of a very effective all-round performance from the Gunners, wine-gum-sized Theo Walcott, who looks like the prototype for his own Corinthian ProStars model, is on the receiving end of several murmurs of discontent. He’s like a pacifist Browning dealer. Got all the handsome pieces on display but the total value is diminished through the absence of all the triggers. All Cillit. No Bang! 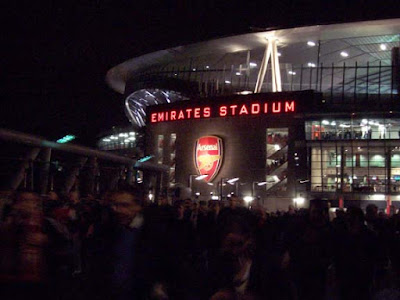 Despite Arsenal’s superiority, the teams remain deadlocked even up until the 83rd minute, when Nicklas Bendtner escapes David Rozenhal’s attention to head home Armand Traore’s cross. Shaken up by this, Newcastle have their best chance within a minute, Obafemi Martins rounding keeper Lukasz Fabianski, but not getting enough on his shot for it to beat Phillipe Senderos to the goal-line. With a minute left, Denilson makes sure of the win with a beautiful shot from just outside the area that flies into the top corner like a snapped pencil-lead into a tear-duct.

Frankly, thank Christ for that, as I’m not sure I could have stood another half an hour. It’s peculiar how people can view things in different ways. I genuinely disliked the experience, and I didn’t come in what that expectation either. The stadium looks nice and all that, but I just didn’t feel comfy with it. I guess it’s just what I’m used to, and there is certainly no value in applying a holier-than-thou non-league-that’s-the-proper-stuff-son attitude. After all, when you see the eager looks on the faces of the kids in the crowd, some possibly taking in their only live action of the season thanks to the fire-damage ticket prices, it would require a curmudgeonliness to the point of scowling deep into a weather-beaten set of mutton chops to deny them that pleasure. It probably isn’t really fair to spoil a child’s excitement by grabbing them by the shoulders and yelling “what about Broxbourne Borough V&E, eh? What about them, eh? Eboue’s probably got about eight Mercs” before spinning on the sixpence of your own rabid spittle and storming out.

Nice to see someone else commenting on Alan Smith's general uselessness. Great report Skif - as ever. Sorry if our mystifyingly negative attitude contributed to your lack of enjoyment - why we couldn't have set out to teach the young upstarts some manners / a lesson I have no idea. They might be prodigiously talented, but surely experience and nous counts for something?

Nah, Newcastle can't be blamed for me being a curmudgeonly old non-league bastid.