One downside of Hampshire’s move from spit and sawdust Northlands Road to the polished silver ballroom that is the Rose Bowl is that, since then, Hampshire have eschewed out-ground cricket. Counties being the expansive representative things they are, it seems only of business sense, and did before business sense as a concept was invented, that you should reach out to your constituency, to go and doorstep them before they forget who you are, and to make them care about your fortunes before they realise they do. Counties like Glamorgan and Nottinghamshire have been known even to take their product out to grounds in neighbouring(ish) counties (at Colwyn Bay and Cleethorpes respectively) and set up shop for a short festival season.

However once you’ve spent millions on a ground that you expect to one day hosts Tests (and in 2010, the Rose Bowl is due to do just that), I guess you want to justify that investment in the short-term. Thus Hants waved goodbye to Bournemouth, Basingstoke and, my old local, the United Services Ground, Portsmouth. Next year though will see a return to Basingstoke, and it is about time. There is something special about festival seasons. When Yorkshire take their show to Scarborough, thousands turn out for four-day cricket, which might only just tip into four figures, on a good day, back at Headingley.

The first ever professional cricket match I attended was at an out-ground, as you might expect at the USG. 1989, Hampshire hosting Lancashire. It may have taken me a whole longer to get to a game had there been a Rose Bowl, and a monopoly, then and I may never have taken up the game to the extent I did without the inspiration of seeing legends in that first game. Legends like Malcolm Marshall, Robin Smith, Wasim Akram and, err, P-J Bakker. Mmm, think the last one may have been a legend only in my house, and possibly his own.

Of course, being that they are built to host club cricket that will rarely, these days anyway, have to cater for big four-figure crowds, spectator comfortability varies. Some cope better than others, Surrey’s Whitgift School ground in Croydon is blessed with a perfect gradient on one side that provides perfect views for all. The Nevill Ground is not quite so blessed, and so unless you are prepared to fork out five pounds to chuck into either the permanent stand or the single temporary one, or are sat at the front, your head will be popping up and down like a masochistic whack-a-mole to try and get a decent all-encompassing view of the play. Hence we stand, although one group have clearly coped with this before, turning up with a big trestle table and enough buffet nosebag to keep ‘em going for a week. 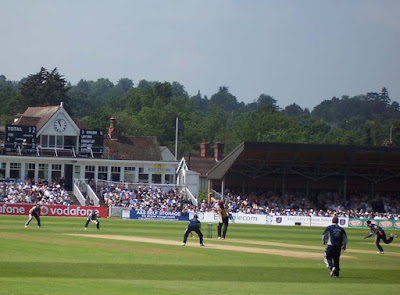 Kent can certainly be forgiven for perhaps not catering for a bigger crowd, as these things are always difficult to predict in advance. The English climate can be a real malicious ol’ bitch at times. Today, though, is dog hot, and thus a good three thousand plus squeeze in, drawn by Kent’s one-week-per-summer visit and, possibly, by the presence of the opposition captain. Not many cricketers can sell tickets on their name alone, but Shane Warne is one of those. Some come today to doff a cap to a legend in his final two years of professional engagement. After all the five cricketers of the twentieth century don’t turn out in Tunbridge Wells that often (Jack Hobbs and Don Bradman would particularly struggle these days). Others come in the hope that their county will put one over on him, while quite a significant number, I imagine, will fall into both camps.

During the final overs of the game, as the great man tinkers with his field after every ball as Kent close in on the target despite a paucity of wickets in reserve, those camps unite as one, becoming a matinee pantomime audience to Warne’s gigantically moustachioed Captain Hook. How, though, did we all get to this point? Well, not me, I ate up every second, of course, ‘AAAAAAAAAmpshire n’ all that.

To start with, the Hawks’ innings skipped and staggered, as though collectively walking in shoes in-soled by a prickly pebble. John Crawley was typically unyielding at the top until, of course, he yielded, caught by Kent skipper Fat Bob Key for 45. The remainder of the top order scrimped and scraped but never took off, until Dimitri Mascarenhas and Nic Pothas did their regular rescue job, turning 123-5 into 205-6, before the remainder collapsed for fifteen runs, two to run-outs for ducks; Warne punished for lumbering; Tremlett for not making the most of God’s gift (or curse if his knee injuries are anything to go by) of a 6ft 8in frame.

Kent’s innings also faltered early, Geraint Jones getting trapped for 7 by Stuart Clark, the Aussie paceman then inducing two mis-timed drives within an over, both dropping like apples shaken from a tall tree into the hands of Sean Ervine at extra-cover. Fat Bob appeared to steady the ship, despatching Warne early in his spell for a couple of fours. That is until the big lad came forward with too heavy a hand, flicking an edge into the gloves of Pothas, stood there snickering behind the stumps like he’d just watched a big plastic bucket fall on Fat Bob’s head; a bucket Nic the Greek had spent minutes placing above a door-frame with the calm and care of a career bomb defuser.


After that Kent’s innings fell away as Warne, Shaggy Udal and Stilts Tremlett quickly pierced their defences. With Warne’s every delivery, there was an increasingly awed silence, and a boost to the numbers gathered behind his arm at the Pavilion end. Despite the fairly low target, Hampshire were defending it with ease, until, that is, Ryan McLaren joined Matthew Walker with Kent staring down the barrel at 136-8. Some of the ‘home’ crowd had already taken their leave at this point, while the inter-county sledging amongst those stood on the far side had Hampshire voices bellowing louder. However as the ninth wicket partnership edged Kent towards 200, it was soon back to level pegging in the banter stakes.

With three overs to go, eighteen runs were needed, and although McLaren succumbed at 205 going for a big hit off Udal that fell into the hands of Tremlett, the pressure was then cranked up as Walker crashed a boundary that was tipped from four to six by Carberry’s desperate dive to catch at long-off. However despite all this Warne remained both calm and wily, taking his own sweet time tinkering with his field after each delivery, at point ‘forgetting’ to collect his sunglasses from the umpire’s hat, and thus further delay a new overs start. The field was being manipulated, as was the opposition’s concentration, the jeers of the crowd appearing only to make Warner go about his work with even greater care and consideration.

However what undid Kent in the final over was something as simple as a straight, good length delivery. Warne had asked Chris Tremlett whether he wanted the pressure of the final over. He replied “yes” and with Kent requiring five to win from his six balls he bowled three, leaving Kent two short as he trapped Walker, finally, in front of his stumps, leg before.

A two run win then, excitement throughout, and though the Kent public had had the chance see a master of guile and, if I’m honest, gamesmanship at work, this will have meant not a jot when those two runs eventually turned out to be the difference between Kent and their conquerors making the semi-finals. Hampshire, in those semis, beat Warwickshire to reach Lords. The entire town of Tunbridge Wells might well have bristled with collective indignation.

Links
Kent CCC website
Hampshire CCC website
Telegraph article promoting the use of out-grounds
Posted by skif at 10:30 am

I found your blog via a Google search, I was wondering if you would be prepared to allow one of your photos to be used on Wikipedia? I'm currently involved in editing the Leek Town entry and one of the pictures from your visit to Harrison Park would certainly enhance the entry.

If not I'll understand, but if you'd be prepared to allow the use of a photo that would be fantastic!

By all means, a link to the main page of this site underneath would be great though.