Sunshine and lollipops. Like what Lesley Gore sang about. Maybe that’s the difference.

Welling United, last month, 1-1. Felt terrible. Lewes today. 1-1. Feels okay, and that’s despite there being only three points now between lovely, sweet play-offs and being sent to bed without our play-offs. You’d like to think that in the remaining six games, our players will kick and scream and establish a firm grip on the banisters to prevent that from being the case. To show a bit of fight is the key, and a 1-1 away draw at Yeading, and a 1-0 home win against mid-table Sutton United have not been exactly convincing in the past two weeks, although certainly better than the four and three goal defeats prior to that at Histon and Cambridge City. However, as I say, yet another one-all draw today doesn’t entail another bout of ennui as felt after the same result at Park View Road four weeks ago.

Surely then it has to be the sunshine and lollipops. And when I say lollipops, I actually mean a big ol' Mr Whippy on Brighton seafront on the way home, and by sunshine, I mean British Summer Time sunshine, rather than the fair-to-middling, not-quite-ready-to-shed-the-winter-coat-yet sun. We are into the final weeks and hopefully the “future’s so bright...” phrase will apply to more than just the British meteorological conditions through April. 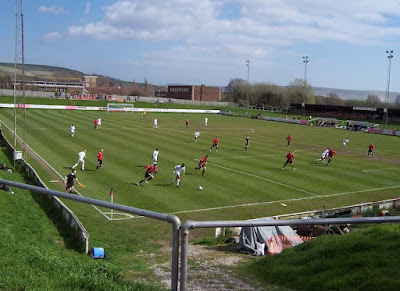 Then again, maybe over and above the creamy cone, it might be simply that after a rather woeful start in the first half, the Hawks actually showed some of the strength (if not the invention) that, in the first two thirds of the season, got us into this position. It was some non-existent defending, again, that allowed Lewes to open the scoring today on the quarter hour, Ian Simpemba’s cross-goal header finding Jean-Michel Sigere in so much space that, if you had the same amount in your loft, conversion into an office would be a viable consideration. Ergo, he had plenty of time to carefully push the ball with his forehead into the net.

Two minutes later, a Fitzroy Simpson free-kick reached the back-post but, blinded by Rocky Baptiste’s jump, the ball hit Neil Sharp square in his squat, rectangular mush like the final blow in a 3am night-club punch-up over a spilt pint. However, just after the half hour and almost from nowhere, our Rock showed the kind of class that has not been in such abundance of late, dancing through a number of Lewes legs before laying the perfect ball out to Richard Pacquette on the right. His cross was then met by Rocky, whose header looped so slowly it eventually hit the top corner with an half-inch of dust on it. After that, both keepers were tested, but ours more so and, in fairness, Shane Gore kept us in it, doing some typically heroic point-blank stuff.

The second half wasn’t the most exciting you’ll see, but at least it showed a more determined, resolute set of Hawks, and arguably we shaded it. So, 1-1 it finished, and some were happy with it, others less so, but given that prior to this game Lewes had an outside chance of making the play-offs, a draw would probably have been accepted at 3pm, and certainly at 1-0 down at 3:16. So not ideal, but we’re still there scrapping and look much more vital than a fortnight ago. It’s all about positive thinking now.

Have added a link from my site to yours skif. Your site raelly is fantastic and good luck with H&Ws promotion challenge.