Football is a game of opinions. So say those who simply must be heard. I’m not that type of spectator. I am a sponge; a receptacle for the blather of my brethren; a black hole, if you will (at least I think that’s what people have been calling me). With me, see, if I’m around, you will know that, somewhere, there is a goose going about it’s daily business, and not being unnecessarily startled by a bellowed ‘BOO!’ We all need an outlet though. Ergo Hobo.

The comments box below invites any opinion, agree of disagree. Sadly, it is those trying to shift weight-loss aids, Chelsea DVD’s and Viagra, who mostly attempt to use it. Their opinion is to consider this site a free market for spam. I believe they should, verily, fack orf. That is my opinion. Never the twain shall get together for an evening of dominoes and sherry. 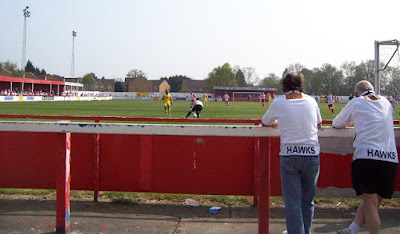 With football, you cannot avoid opinions, particularly so when one’s team is heading to defeat, and the sun is beating down on heads awash with a small lake of pre-match real ale. This combination’s ability to lead to a free-flow of well researched ideas will lead to conflict from time to time. There are those who will squawk like a grounded teenage crow in mid-tantrum, loudly and profanely berating players for their every mistake, and there are those who will suggest that that is not the action of a ‘supporter’, and that players mis-firing should be encouraged, not have their ebbing confidence further kicked whilst down. Today’s set-to was based on that very inconsistency and although based on two people similarly pained by a desperation to see us do well, it was a slightly worrying echo back to last season’s factionism behind the goal. That factionism has, by and large, been eradicated through a rejuvenated supporter’s club bringing the regulars together by coach for away-day travel. Never underestimate the value of team bonding.

By contrast to that notion, the other team, y’know the one on the pitch, appear to be coming rather unstuck. Not in terms of togetherness, but with regard to their collective belief. If we’re not careful, it could soon be out of our hands, and the annoying thing about that is that we really weren't a poor side today. We bossed ‘em, particularly in the second half, to the point where we might have been ‘ad-up for battery had we landed a knockout blow. This was after all a side that, as the second period went on, were looking increasingly as heavy-legged as a Mafia snitch being fitted with his new Blue Circle booties. 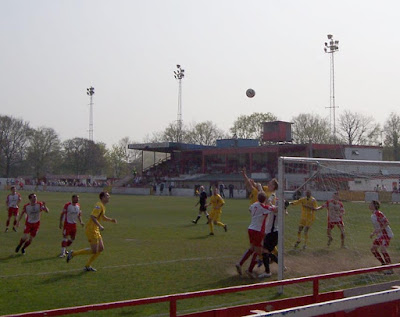 We certainly had plenty of clear-cut chances. Hence the frustration. Rocky had at least three one-on-one opportunities, while Craig Watkins, making a rare start, had another. On all occasions though they couldn’t get the finish, although in fairness this was in the face of a dogged defence and their strong, determined keeper, Kevin Scriven, who made a lot of difference, not only with his angle-narrowing, but with some go-Gadget-legs catching, and almost gleeful, giant-chinning-for-midgets-workout, punching.

However, aside from Richard Pacquette’s classy chest-parry/shot-on-the-turn finish (and ensuing machine-gun-wipeout-of-the-travelling-support celebration), we were wasteful, despite our constant pressure, against the resolute, but visibly tiring, Rip Van Boro. Yet they woke up alright, the gits, finding enough strength, while yawning and pulling off their flaccid, wizard-style stripey night-caps, to kick-out and smash the H&’Dub alarm clock. An 88th minute suckerpunch was enough, a Ty Smith free-kick curled beautifully inside the near post, beyond Shane Gore’s dive.

BANG! And the choke is on.

All these last few games have arguably been ‘must-win’. Make no mistake though, Yeading at home on Monday is a particularly musty must-win. In summation then, we MUST WIN!