Before you visit a place for the first time, you tend to have an a priori impression of what it will be like. Paris: city of romance. Milan: city of fashion. Prague: city of drunk Englishmen tying a groom-to-be’s feet to the underside of the King Charles Bridge with a rolled-up bed-sheet. Or some such.

So it is with Rome. A city that is synonymous with ancient history. An ornate place filed with religious and historical artefacts on every corner. So I would have thought prior to, and that is largely a correct impression. However the romantic synapse within your imagination is careful to put up a black, rectangular Readers’ Wives-esque shield up, to keep on show the bits for which you bought into it, but to also cover up the true identity. Rome is a modern city, full of irritation, bustle and graffiti adorning any surface that doesn’t appear in the guidebook. When it comes to the architecture, Rome is careful to look after its old, but it’s new does not get anywhere near the same love and attention. 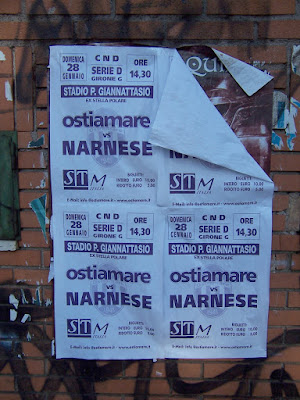 This is not to say that it’s not typical of major cities throughout Europe, but this is a place you’re supposed to fall in love with. Instead it felt like an overlong date with someone whose personal-ad had hinted at a love of great literature, but whose tote bag had spilled out three volumes of Clarkson as they tripped on the last step up onto the restaurant’s mezzanine. Mind you, with food in mind, I can’t fault the pizzerias, nor the ice-cream parlours. These gastronomic choices might seem a little obvious but, after all, when in Rome…

…well, do as the befuddled, linguistically inept tourists do, apparently.

Perhaps, my view was unfairly tainted from the start of the trip though. The hotel came recommended, and was certainly well located, even though the short journey over the water from Termini station to Trastevere was enough to find us hopelessly lost. It was a functional, unspectacular room, with a small television that made like the Westbrook nostril with the amount of white lines ripping into it. The guidebook had promised a view of the market. Indeed, there was, and possibly more than about an inch and a half of it from higher floors than ours, our view taking in mostly the stallholders’ security sheds. However, there was a small tunnel between the sheds where one might peek on a crisp, winter morning, if one had no qualms with invading the slumbering privacy of a homeless man and his two dogs.

All that said, the hotel was perfectly adequate, but frankly we could have been jammed into one of those sheds outside, with a load of unsold, and questionable, lemons, and it would have seemed a haven after our trip into town, from Ciampino airport, on the Metro. For the first couple of stops it was quiet journey, and allowed time and space for us to get used to the polished slipperiness of the plastic seating. After our third stop, two women, presumably mother and daughter, boarded the train and sat opposite us, and the hyperactivity of their interaction certainly appeared in keeping with the Italian gesturing stereotype. 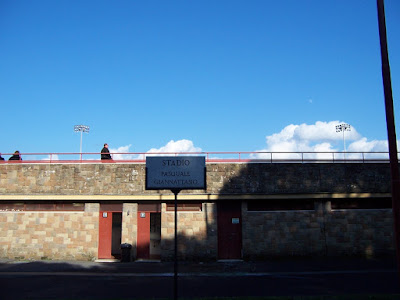 The tone of their voices suggested some agitation, and partly out of fear that it had been my early glance in their direction as they sat down noisily that had caused it, I kept my eyes intently on the straight-line map above the door. A brief pause in their clamour meant I glanced again, just as the younger of the two, unleashed a jet of lurid cud-green vomit onto the carriage floor with the kind of velocity you only usually find coming from what a fire-crew might refer to as their ‘Daddy’ hose. There was a comic broadness in the sustained nature of her British Racing gush, a cascade only occasionally roughed by a rogue chunk but, nonetheless, we were grateful for the fact that the Roma metro trains are not a series of carriages, but one long one, and thus fled to sustain the colour of our luggage and shoes.

We had felt, prior to our trip, that we had not put as much effort as we might have into learning the basics of the Italian language, and certainly going native to the point of being able to understand a cry of “Oh God, sorry mum, I’m going to have to be the chundy kid. Look out, here it com-ahhhlllgg” would have come in handy, but one cannot prepare for everything. One might prime oneself with “may I offer your steed a sugar lump” and never come cross a police horse so, frankly, why bother even learning “thank you?” 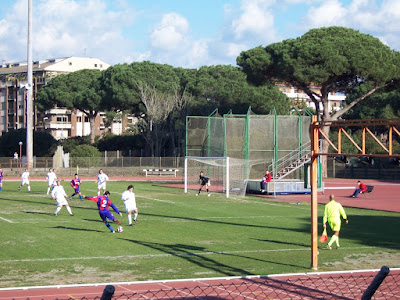 Well, “grazie” was pretty much all I was capable of, that and empathic (read: wincing) facial gestures in the direction of those about to enter at the same doors that we originally had, as we left the train at Termini. So, after that Rome had to do a lot of work to get us to fall in love with it, and could never really manage it. So here, on our penultimate day, I am glad to leave the city behind for a bit, and head out into the suburbs. Mind you, if I’d been expecting to see a bit of the outlying scenery on my half hour journey to Ostia, the windows of suburban line trains being mostly obscured by slapdash graffiti tags clouded over that. As such, what with passing beyond the tourist friendly area of Ostia Antica to this outward spot Stella Polare, the silence, coming from the blaring horns of the scooters and Smart Cars darting across the city, is a very welcome respite. The only problem to overcome here is the need to watch the ground to discern a wet pine cone from a damp dog shit.

Here they adhere to a Sunday closedown with only a café and a couple of kiosks open for business. This is just the ticket, although if I’ve come here to also escape the athletics tracks and bowl seating of Serie A, then I’ve only succeeded on one level. Still, I’m keen. While in the National Museum of Musical Instruments yesterday, and its temporarily attached Maria Callas exhibition, I’d had texts firing at me constantly informing me that, back home, Havant & Waterlooville were turning a 3-1 deficit into a 5-4 home win against promotion rivals Bishop’s Stortford. Thus I’m up for a bit of a goal-frenzy. This being Italian football, perhaps that’s asking too much, but still… 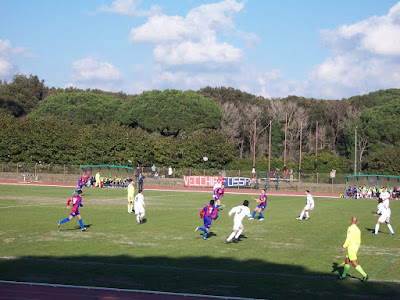 The gates open a mere fifteen minutes before kick-off, small kiosks directly next to the two gates selling tickets that would then instantly be inspected. Here the home fans appear to occupy the uncovered, seated stand, while the more hardcore Narnese fans have the run of the terracing that bows around the other three sides of this elongated oval. There appears to be no signs directing anyone towards segregation, it seems to be just the way they prefer it. The thirty or so Narnese followers who enter on the far side, spread themselves along the side terracing, putting up three or four flags at the centre-line, the largest reading ‘Vecchia Fossa’. There is no programme, as far as I can see, nor a tea-bar, but free team-sheets are handed out.

The teams, having waited impatiently on the athletics track, follow the three officials, all clad from top to toe in a neon yellow kit so loud that it carries not only their notebooks but also the very real threat of tinnitus, onto the field of play. After that the game begins, the first chance arriving on five minutes, Ostia’s Laurentini launches a curling 35 yard free-kick, and Narnese keeper Taddei has to be alert at the far post and he punches away. Over on the opposite terrace, a Narnese fan listlessly waves a blue and red chequered-flag. Like he’s stuck in a Friday afternoon home ec practical or something, it does appear that he might rather be somewhere else. Some alongside him are following the play along the length of the steps, as though they are over-officious linesmen assessors doing a Lizzie Webb morning workout. 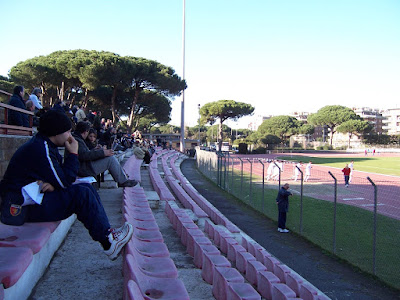 After quarter of an hour, Narnese break, with right back Cavalieri, a tall figure who, rather elegantly, appears to be wearing a cravat, sending in a cross that is turned home by Gammaidoni. However the linesman has whipped up his flag for offside [see picture above]. Not long after Ostia left-back Passeri goes in late on De Santis who springs up in the air, falling into a stricken-tortoise position. Passeri ‘apologises’ with a firm slap on the tackled ankle.

On 26 minutes, the home side open the scoring. There is a mix-up in the Narnese defence, and Laurentini powers through, unleashing a shot from the edge of the box into the far corner. He then goes on a long run, past the steeplechase hurdles and over the long-jump pit to celebrate in front of the rapturous folks sat around the halfway-line. 5 minutes later, the goal scorer fires in a free-kick and Taddei parries the ball like he’s fending off an over-amorous Irish wolfhound. As it drops in front of him, Alfonsi tidies up and side-foots it into the far corner, then repeats the celebratory run of his colleague over the athletics track [see pic below]. Ostia just about keep their two goal lead until half time.

After the interval, some proper singing begins, from about 10 of the away support, one song to the tune of ‘Go West’, one following the ‘Guantanamera’ pattern, as well as some unfamiliar pieces. For Ostia, one elderly gentleman is grumbling instructions to himself. Being more vigorously, and audibly, backed, it is unsurprising that it is Narnese who begin second half the stronger, Grilli heading over from the six yard line relatively untroubled by defensive attention. One man in the seats tries to begin a chant of “O-stia, O-stia” but gets nowhere fast.

After a while where nothing of significance occurs, Narnese substitute Cappito gets tackled, then rolled like a beer-barrel by the entangled defender as they both go down. A free kick is the inevitable result. Conti floats it to the back-post where, amongst, a flurry of legs, Gammaidoni taps it in. 2-1, but instead of pushing on, Narnese acquiesce to another period of stagnation where neither goalkeeper is properly tested and thus Ostia Mare win, moving closer to Narnese in the Girone G mid-table. Upon that final whistle, I head back to the city, making sure to get short-changed for a Diet Coke and a packet of crisps en route. Sigh.

Arrivederchi Roma. We’ll always have that impromptu 3-D screening of The Exorcist on your underground.

was the quality any good, though? I imagine it'd be slow and methodical even at that level...

(higher crowd than this weekends Serie A games by the look of it, however...)

Bit slower than equivalent UK levels, and a little more methodical, but not radically in either case.

Certainly game was able to drift amongst the midfield for long periods.

Please visit my blog if you are looking for Weight Loss Tips and diet Information.