In the two weeks since the draw I was able to read fear between the lines of the majority of postings on the H&W web forum. Here we are, so close but, well, best not to say it out loud. I, however, reacted to seeing the words “Quorn or Brackley Town”, just beyond the ‘v’ to the left of our cumbersome longer-than-both-of-them-put-together handle, with instant excitement. I stayed largely in that giddy state, y’know stupidly, unnecessarily confident, ever since, through 12 days, and the long train journey from Liverpool to Banbury.

On the 500 bus though, crossing the M4 to Brackley itself, it hits. That doubt, the fizzing depth charge to the sea bed of your liquefying stomach. After three successive seasons, since our last 1st round appearance, of departing the competition early to lower league opposition, surely we wouldn’t choke again.

Like I’ve mentioned countless times on this site, we’ve made the first round twice and both times fate has held a thumb to its nose and wiggled its fingers as we’ve been drawn with Conference opposition. Not exactly the dream ticket when we might as easily have drawn them in the 4th qualifier. Indeed, the other two times we’ve come up to this last hurdle and not made it over, it has been due to a barrier put up by sides then plying their trade in the top echelon of this ‘ere non-league. First it was Hayes on penalties in ’98 and then, 3 years later, Barnet after a replay. Arguably we were unlucky to draw the first game, and it took the, I think, third fastest hat-trick in FA Cup history to barrel us out. After the first goal at Underhill, and a day-long session in the capital that took in several pubs as well as the London Eye, I was much in need of a urinal and thought his the ideal time. By the time I returned, 2 minutes later, we were 3-0 down. Sigh. 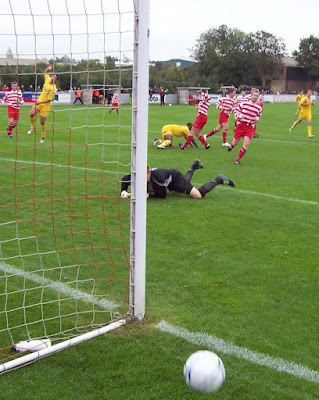 So what was I to make of this game, logically. Well, you can’t apply logic here, at this stage, pre-kick off. As an example, I described my brand new nervous symptoms to some of those amongst the impressive throng of Hawks in the Brackley bar. “Don’t talk about the game” yelped one of the more superstitious amongst our number in that ‘Oh you’ve ruined it now’ way that usually suggests someone’s Mum’s creative-spurt overspend at Hobbycraft has resulted in heavy floral stencilling inside their treehouse and a frilly lace surround for their Subbuteo mat. Logically, nothing I say or do will affect the outcome of a game but, clearly, all those rules go out of the window once you arrive at this point.

The first half didn’t really help as Brackley put up decent resistance to go with some laissez-faire finishing from our front men, not to mention the scares they caused us cuticle-nibbers behind the other goal – Craig Farley went far too close for Brackley early on. Also our defenders looked a little anxious, at one point shepherding the ball around the central edge of the penalty box like they were engaging it in a game of kabaddi. That allowed a Brackley midfielder to nip in and send it over the bar. Come half-time it was difficult to call. Sent a text to the absent Barry (well, he keeps me updated enough during the course of a season), his reply was simply a very tense “I’ll take 0-0 now”.

Adrian, with whom I queued at the tea-bar, began putting things together inside his youthful swede. It was fairly mild and quite overcast. The forecast we saw was for heavy rain. He pointed out a comparison. If it rained, here we were at a ground with no cover aside from the stand, and we were certain to be under the cosh of the elements, should they arrive. Just like Cirencester last year, and what happened then? Out the cup we went. I scrabbled for a minor statistic to compete. ‘You like omens, Adrian? Well, we’ve never lost to lower level opposition in the 4th qualifying round. How’d you like them omens?’ I said, or something like (not quite as derivative, probably). 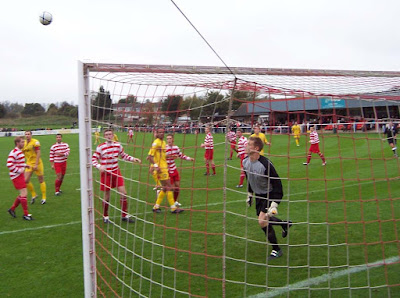 The first 15 minutes of the second half once again saw Brackley taking the game to us, making light of our supposed two division seniority. It wasn’t until the 62nd minute that we could finally breathe a little easier, as Rocky Baptiste (no, nobody else scores our goals these days) completed a fine finish to a quality move. Not that we could rest on our laurels as not long after, Tom Winters tried his best to snap Shane Gore’s crossbar. “That’ll still be shaking at Christmas,” said one of our number, and I felt that I might well be doing the same. From thereon, things became a lot more relaxed as we put in the solid performance we were due and with a minute to go, le Rock (him again) made it safe.

So, there it was. A final whistle. A win. Bouncing I were, like a Hamleys pogo-stick demonstrator with an Elvis-like appetite for amphetamines. The lack of cover at St James Park to amplify our tunes meant I was also pretty hoarse, but, well, it was literally Showaddywaddy but figuratively theme from Flashdance on top of the grass bank as well as with them there down the bottom.

Sadly, I had not thought the next part through. The draws for all the qualifying rounds take place on a Monday lunchtime, so I’d not thought to allow for time to stick with my fellow fans, and the players, in Brackley’s bar to discover what fate lay in Sir Trev’s big sack a’balls. Took my radio on the bus back to Banbury railway station, but only the telly covered it live so I had to find out our opposition via a Barry-brand text message in the end.

“Home to Millwall,” it read.

So there it was. Finally. The league club we’ve been waiting for, and pretty much everything I’ve dreamed about since first I pushed through the WLP turnstiles knowing I was a fan, and not a daytripper; the 3rd time, I reckon. Yet I wasn’t feeling anything. At all.

Maybe it was the anti-climactic tension-less discovery; maybe it was the long day out, or maybe it’s because I once accompanied a mate to watch Millwall away, and had to endure a shower of beer bottles on the way back to the station from the kind people of Bermondsey. Whatever, this wasn’t the barely containable euphoria I’d been expecting.

I got a phone call from one of the Supporters Club coach party, who were buzzing as, apparently, were the players. Think my lack of whoopery may have killed my correspondant’s buzz for a moment [apologies]. As he said to me though, “this lot were finalists two years ago.” That’s the kind of logic that does work and you can’t argue with. Our gaffer has been quoted since as saying “I don’t think we could have got a better draw” and if there was any club in League One you might think susceptible to an upset away at a non-league side, well, you might possibly consider the ‘Wall. Well, you might…

Thing is, you’ve got to take into account my wretched brain. Took me a while to get to kip last night worrying. Not about hoolie action in the car park, or it being moved to Friday night so Sky can show it (meaning I could not go due to prior commitments). No, my brain doesn’t think about the possibility of winning, it fears the humiliation, of not being a great advert for the semi-pro game. ‘Dave’, says brain, ‘you can have your cake, and you can eat it, mate….Oh, but that’s on the understanding you wrestle, Olympic style, with these lost and irritable pack-wolves first’. 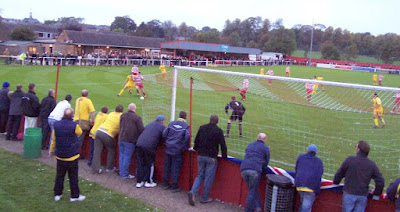 But that, I’m glad to say, was last night, and today, 24 hours after the biggest tombola prize we’ve ever plucked out, and that brain is finally kicking into the right frame of mind. It’s very simple really.

It’s going to be BRILLIANT.

I should point out that I reserve the right to retrospectively edit this article. Well, all the capitalised words in it anyway.

...at Fratton Park as well, by all accounts. Good lord.

Yes. Tell me about it. On a Monday night too, hardly ideal for the non-driving exile. Will be able to make it though.

Worry is that the whole Pompey vs Millwall history will overshadow our evening. There is a potential that rather than minting us up, the cost of policing will mean that getting to the first round and drawing a league club will actually cost us money, and lots of it.

So we want the people of Portsmouth to come out and support us, but hopefully not to use it to their own quasi-hoolie ends.

Why couldn't we have got Lincoln?