Preston are one of those sides, like Stoke, Blackpool and maybe Wolves that are most readily associated with football in it’s dust-coated archive form. In aerial photos where swathes of baggy flat caps cover every inch of expansive terracing. In Brief cuts of newsreel footage soundtracked with the clack of rattles, whirring like dervishes, the stocky grandparent of the air horn in the family line of football’s aural irritants. These are clubs whose finest moments in the collective memory are almost all sepia-tinged.

Of all the sides I mention, Preston seem the most keen to wallow in cushioning nostalgia; the National Football Museum is based here, after all. On top of that, rather than arrange the rainbow of seating to spell out sponsors, acronyms and empty rallying calls, Preston go for the more complicated, but elegant, aesthetic of embossing a likeness of a club legend on the 3 new stands. These are, as you might expect, named in honour of the respective heroes, they being Alan Kelly; Bill Shankley; and Sir Tom Finney. 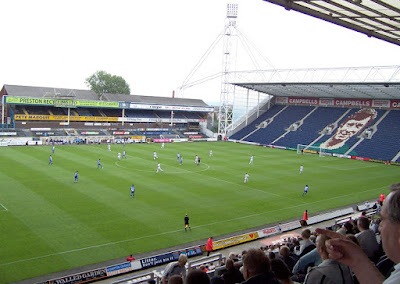 Of course this handsome effect is usually lost under the weight of thousands of unwittingly disrespectful North End arses sitting down (and telling Shanks they love him). Today being a friendly, and therefore eschewed by all save the most hardcore or the downright foolish, Alan Kelly and Shanks are able to beam out unfettered by collective crack. Sir Tom is not so lucky, but then again he does get a fountain statue outside in addition to his dignified mooey in tip-up plastic form.

Inside the ground there are certainly fewer concessions to history, as the 3 ‘facial’ stands rise up, screaming essential modernity in the post-Hillsborough age, despite the gigantic illusions they display. At the moment though, between Bill and Alan, and opposite Sir Tom, is the rather dowdy and old school Pavilion stand, and the Paddock terracing that is surprisingly free of weeds considering its long-term lack of use. Soon though I expect Deepdale will need to lose it, and be a much blander structure for it. 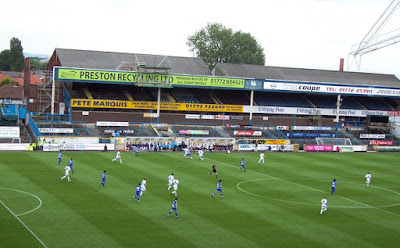 Certainly, the ground is probably better experienced for a competitive fixture, as with only one side open and about two thirds full, the hairs aren’t likely to stand on end anytime soon. Friendlies are always shite though. It is a warm-up, and so it appears is it for the crowd, as about 8 tracksuited scals at the back try to get some singing going on the odd occasion. Their attempts are met by silence, very subdued whispering of their lyrics and the odd yawn. The rest of the time idle chatter, only barely related to the game playing out in front of us, keeps up an idle hum.

The game itself? Ye gods. Where do you even start? Should expect it really but literally, NOTHING HAPPENS. The odd chance that isn’t really a chance. A touch of pan-European bitch-slapping at the start of the second half. And that would pretty much be it. Despite Malaga being a mid-table La Liga side last season, they’ll probably be sad to learn that they are the equal of a side finishing 5th in the English second tier in the stupefyingly dull stakes. I remember now, this is why I don’t do friendlies anymore. All the atmosphere of a homeless, kinless junkie’s funeral. 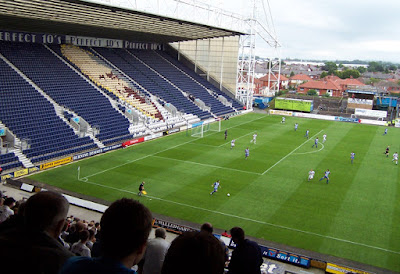 Used to enjoy Havant & Waterlooville playing away at smaller local sides and beating the Pompey stiffs at West Leigh Park year after year at the turn of the millennium. They’re big-boy Premiership now though and this year even turned out their first team to spank us 6-nuffin’. Still 3000 through the turnstiles ain’t bad for the club coffers. Nonetheless, there’s little to enjoy in these things, save for seeing your home ground nearly full. Of away fans. Sigh. Bring on August 13th.

There’s a couple of coachloads of visiting adolescent American soccer teams at today’s game who have probably heard a lot about the loyalty, passion and quality of the English and Spanish leagues. Maybe it is early exposure to mind-numbing European soccer friendlies amongst US teens that explains Gridiron’s enormous popularity.
Posted by skif at 6:08 pm

Love the concept behind your blog, 'love your work man'.