Do you ever get that feeling? I’m sure you do. That feeling like you’re seeing effigies of Bill Shankly everywhere? First got this peculiar affliction last Saturday at Preston. It was as though his mush was appearing to me, and probably me alone, through some lenticular illusion coming from within the seating. Then tonight passing the Anfield club shop, it’s like he’s there right in front of me, pumping fists while floating a couple of feet above the milling crowd. Starting to freak me out, y’know.

So yeah, our Billy, bit of a hero at Preston and, apparently, quite well thought of by a few of the folks up here. Easy to see why, the Shankly era marked the start of 2 decades of Liverpool dominance domestically and often in Europe, a legacy continued on through Paisley, Fagin and Dalglish, and stopping dead with Graeme Souness. The 90’s was a quieter time, and the 5 mugs in a calendar year won under Gerard Houllier appear to have been brushed under the carpet. Victim of Liverpool’s previous successes though, rather than his own. Still though, the Liverpool passion burns brightly red, which they appear to wear with good reason. Their pride and loyalty, along with Everton fans' stoic support of their side, shows all that is good about Liverpool, indeed you only have to listen out for the number of Scouse accents in the world of football as a whole to see how much the game means in this part of the world.

Sometimes, in this town, it can feel like there are only two options, regardless of your origin. You can get the question 'RED OR BLUE?' fired at you, as though from the angry lips of a phlegmy Gestapo general, on your way out of Somerfield for example. Your answer dictates which club crest-adorned credit card you will be offered, once you've picked yourself up off the floor and wiped away the spittle.

Had I bothered to respond 'white with blue and yellow trim', instead of running away in abject fear, and then been presented with an H&W-skinned MasterCard, then I'd have been suitably impressed enough to sign up to crippling debt, for sure. I imagine, though, that the hot-foot was the right option at every stage.

It's not always so bipolar though. En route to the game, I spy a glimpse of a kickabout going on down a side street. 3 lads knocking it around, 2 dressed casually, the other decked out in an AC Milan top. After the shenanigans in Istanbul, I can’t decide whether this is great empathy or sheer lunacy. Either way, he doesn’t appear to have been hit with too much abuse. It would appear that the nation of Liverpool has died down from a giddy hysteria to a gentle glow of satisfaction regarding their thrilling Champions League victory back in May. 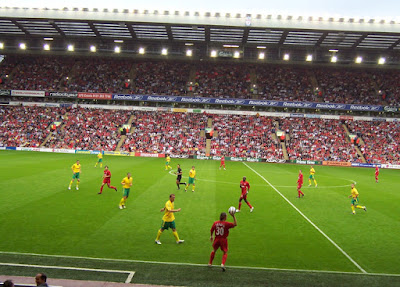 Indeed the Red Army were brought down to earth rather by UEFA dumping them into the qualifying rounds of this season’s extravaganza. Frustration abounded around Merseyside, with Everton sphincter’s initially tightening at the prospect of our FA awarding their place to Liverpool thereby allowing UEFA a get-out clause for not setting this kind of situation in rule-book stone, after Real Madrid’s 5th-placed warning in 2000 (where the Spanish FA did obligingly rob Zaragoza of their spot). While you can see the logic of placing the winners of the tournament instantly back in the pot, it seems this logic isn’t good enough for that plucky bunch of grafters, Brazil, who have to go through a couple of short YEARS of qualifying to have another crack at winning the Globeshire Senior Mug.

Besides the Champions League, to my mind, means the champions of each European league. Some would no doubt argue that teams like Neftchi, HB, Kairat Almaty and Sliema Wanderers, for example, dilute the competition despite being champion sides. While the standard is far off that served up in the heavy seeded nations like England, Spain, Italy and Portugal, do teams finishing 4th entering the contest not fly in the face of the concept? With Liverpool’s triumph last year, probably not then, but it’s a healthy mix, and a real delight, particularly for an enthusiast for unfashionable leagues like myself, to watch the Champions League winners slumming it against folks like TNS and tonight’s opposition, FBK Kaunas, champions of Lithuania for the past 5 seasons.

You don’t argue with a tenner a seat either to watch the champs defend their title, even if it is a heavyweight v light-middleweight contest, the feather light TNS already dispatched calmly and efficiently. Not a bad seat either for me outlay, sat in a row of one single seat that’s wedged between the gangway steps and the directors box. Right at the front, too so able to lean on the same supporting wall as bobble haired Chief Executive Rick Parry (as seen in the picture below). Although no cushioning on my seat though. Refunds will be demanded, of course. 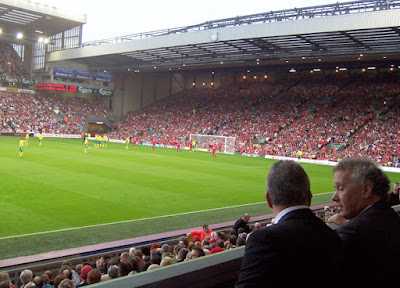 The Lithuanian dignitaries take post early in the plush seats to soak in this atmosphere of this fine stadium. I’m not easily seduced by size and seats, but this place just WORKS and it’ll be sad if they do decide to move elsewhere.

The visitors could though have probably lived without the highly smug PA announcement that the Kop would have to be on good form tonight to out-sing the away support. 30 or so Lithuanians ghettoized in the Anfield Road Stand give a collective look that says “Go on then, impress us”. With that a piped ‘You’ll Never Walk Alone’ is accompanied by near on 40,000 Liverpudlians bearing scarves. The Kaunas hardcore break out in to a round of applause, on its completion. It is as impressive a sight (and sound) as many have described it before. Not quite sure where the Kop’s predilection for Johnny Cash’s ‘Ring Of Fire’ comes from but it’s never a problem to hear June Carter’s brass motif (Johnny’s wife wrote that one, fact fans) in any form.

Being 3-1 up from the first leg, Rafael Benitez doesn’t play what might be considered his first team although it’s still a formidable line-up, but it relegates Steven Gerrard to the bench along with Djibril Cisse, whose physique and facial hair appear carved out of a number of precious stones.

There also appears something new on offer from the Champions League. Sexy refs. No longer just the geography master, the accountant and, err, Pinhead from Hellraiser ref styles, no, Italy’s Gianluca Paparesta has Figo-esque filmstar looks. Who’s the bastard in the fetching little black number? Anyway enough homoerotica… 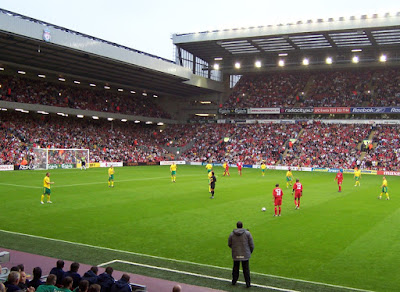 It is a fairly slow game with Kaunas soaking up any Liverpool pressure. Paunchy Rafa is up out of his dug-out every other minute, seemingly exercising away his holiday flab (not that he had much of a break after UEFA’s kind gift of the qualifying rounds). His counterpart remains rooted throughout. Telepathy apparently in the Lithuanian coach’s locker.

Liverpool’s expensive new signing, Peter Crouch, appears to have not yet developed an understanding with his new colleagues and once substituted with a hamstring strain, he isn’t overly missed. However it takes Gerrard and Cisse coming from the bench to sort out the tie. Gerrard receives a Papal-like reception, so it would appear that despite him preparing, for a while at least, to leap aboard Mourinho’s footballing juggernaut, it has been both forgiven and forgotten. He is Liverpool just at the mo and, as you might therefore expect, he pops up with tonight’s first goal to gee up a crowd getting a little bored. Only his 7th from midfield in the Champions League this year, perhaps he fancies adding a decorative shiny shoe to his mantelpiece this year, if not another big eared fella that he can share with his mates.

Before the end the impressive and tireless Cisse glides through the air like a stop-motion ghostly gazelle to connect with a cross to wrap up a 2-0 victory on the night and 5-1 on aggregate.

On this display, it’s hard to see Liverpool challenging Chelsea, Arsenal and Man Utd at the top of the Premiership, but then they are a side that seemingly always pick themselves up for the big games, and with a full strength side out, who knows, perhaps they can wow again in Europe, and even on the domestic stage.