After the Saturday trip to Altrincham, this game 3 days later represented a chance to travel to the other extreme of the blue veiny tramline that winds it’s way from South Manchester to North. So, I found myself at Gigg Lane, Bury, home of the Shakers. 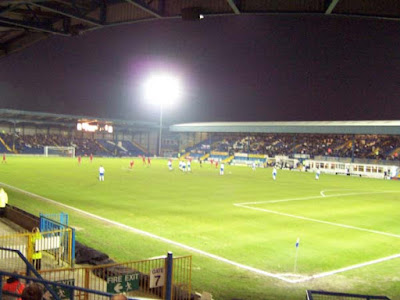 Time pressures mean I cannot give as much time to this game, blog-wise, as I’d like, but given the scoreline, there ain’t that much to tell. There was a mazy run from Colin Kazim-Richards that, had it resulted in a goal, would have been a Bury classic, but ‘nearly’ was the story of the game. A fair result in truth, although Shrewsbury did bring two full length saves from Andy Marriot. 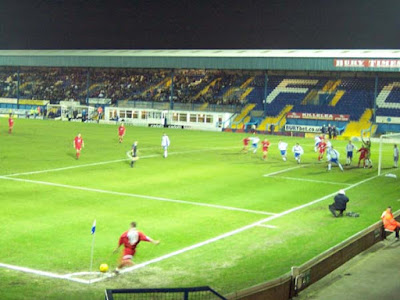 Gigg Lane is an odd ground, which you can translate to mean that I took rather a shine to it. All-seated with an 11,000-ish capacity (that usually houses about 2,500 punters) it has a traditional feel but with modern features. For example, while at both ends their stands go from corner to the edge of far penalty box, the Cemetery End nonetheless curves round the corner into the South Stand, which is not something you often see in the nether regions of the football league.

Being less than a quarter full, it was notable that the Bury hardcore did not seem to congregate on a large scale, their support being dotted around in 1s and 2s. Perhaps they are not a particularly social bunch, or maybe they just don’t like each other. It was clear from the booing upon the final whistle that they weren’t that fond of their team either. 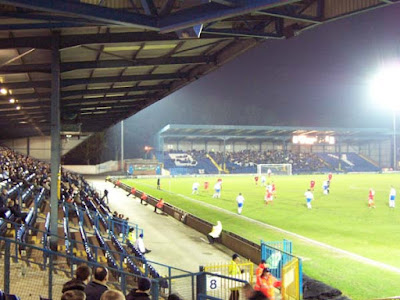 What else can I tell you by way of highlights? Well the argument between two Shrews fans concerning the merits of their current gaffer was quite entertaining on the tram ride back to Manchester Vicky station. Mmm, highlights, erm…well, I noticed amongst the billboards (believe me, I had plenty of time to look around) that a removal firm advertised their sponsorship of their local side with the phrase “Movers…and Shakers” written large. I bet when they came up with that, they could hardly contain themselves.
Posted by skif at 7:20 pm