When I choose a game to go to of a weekend, there’s always a thought before, and sometimes after, that I could have picked the wrong game, that a better tie may be found elsewhere. You never know which one’s going to offer up the dull 0-0 or the gripping 3-3. Tis a lottery. When you consider I picked this one out weeks ago, I doubt I could have chosen better. For reasons pure and impure, it’s long been an ambition to come to Accrington Stanley... 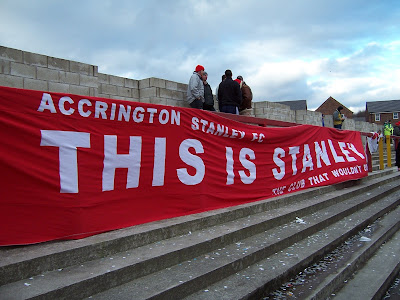 …and I know what you’re thinking…

…and yeah, I quite fancy a glass of milk right now n’all.

The Accrington Stanley name is, of course, synonymous with old school league football, but despite the same handle, this current club is not the same as that which played in the league between 1921 and 1962, nor the Accrington FC which was a founder member of the league in 1888*. This current club was formed in 1968 reaching the pinnacle of the non-league pyramid just a couple of seasons back. In my humble, it’s not about the financial set up though, but about local affection and like fellow Conferencers Aldershot Town, Accy command a great deal of ‘traditional’ support where the history appears to have been bolted on. However those wilderness years in the lower echelons probably explain the plethora of Blackburn and Man United winter coats and beanie hats in attendance.

The name of a club does mean a lot. It is essentially what you attach to. For example, which club has greater claim on the 1988 FA Cup? AFC Wimbledon or Milton Keynes Dons? I know what the AFC fans think, and I agree with them. There’s probably more who were at Wembley that day that catch the bus to Kingsmeadow than get a train to the National Hockey Stadium, put it that way. 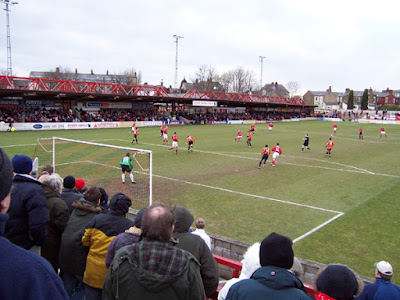 Accy have a significant hardcore and many young faces line up behind the relevant goal in each half. Indeed, I have never seen quite such a variety and array of flags from a home side outside of the league. Giant ones proclaiming their pride alongside smaller ones, such as one which reads ‘Accrington Stanley: Barbados Tour 1995’. Ten years on, I expect they are still working off the hangovers. Arguably the ultimate beano. A Bajan flag unsullied by text also flies proudly further along, while a standard bearing the fizog of Che Guavara is waved throughout the game. Not that it is overly high-brow and politically radical on the terraces here as in the second half we get ‘Accy Stan sing the comedy dramas’ as ‘That’s Living Alright’ is knocked out after a sadly aborted ‘I Could Be So Good For You’.

The Interlink Express Stadium (or the Crown Ground to us traditionalist types) is not exactly as I expected with the stand running the entire length of one side but with very little depth. An old-school corrugated shed runs opposite with uncovered terracing at either end. Should they ever make it into the league, they would find themselves a long way behind the times. However, for the aesthetes, there is a corking view of what I assume is part of the Pennine hills looming over one of the terraced ends. 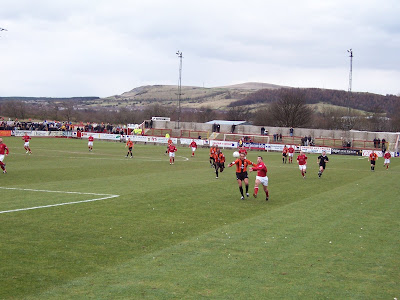 I came to this game expecting Barnet, who are running away with the Nationwide Conference this season, to run the show but for the entirety of the 90 minutes they make very little impression on the Accrington goal. There is one shot in the second half which the Accy keeper has to force onto the bar and out, and then there is their eventual consolation in the 85th minute, nicked while Stanley were stupidly giddy from hitting the onion in the 83rd AND 84th.

So that’s the ending spoilt for you, let’s take it back the beginning. In fairness though, there is no twist. Accrington pass, move and create for most of the game, it is a scintillating performance that keeps notorious Conference goal-hound Guiliano Grazioli quiet (if you ignore said consolation). Lee McEvilly is particularly impressive, chasing everything and holding the ball up excellently. It is he who scores the first goal, dancing deftly through the Barnet defence to push it under the keeper(the goal is celebrated below). 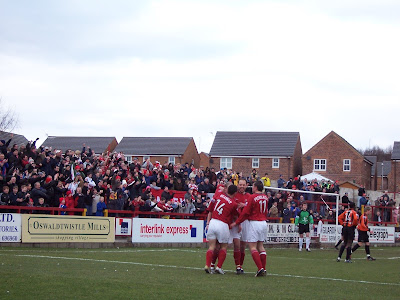 Accy have several chances to increase their lead in the 1st half, including a header over a gaping goal from 2 yards and a tip over from the Barnet keeper Scott Tynan (below), but it is not to be. Their assault begins instantaneously in the second period as well with saves and goal-line headers required to keep it respectable for the champions elect. Eventually Rory Prenderghast meets an up and under sweetly to double the margin, before Mullin and Craney do their two-in-a-minute double act, that is swiftly followed by a defiant but largely pointless opening of the Barnet account. While the class that has raised the Bees so dominantly to the top of the pile can be seen in bursts, it is well muzzled by the Lancashire side, who are only denied a 5th by the off-side flag. Make no mistake, if the result flattered anyone, it was probably Barnet. 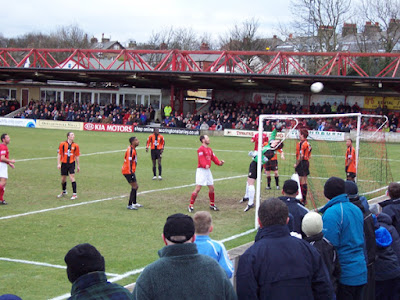 The classic 80s advert, that even as we speak is running through your mind, doesn’t quite fit with the current image of Accy Stan though, and on todays showing, you’d be quite proud to don their shirt. In the mid-80’s, when Liverpool were at the peak of their dominance, Accrington Stanley were plying their trade in the North West Counties league, hence the milk saturated child’s incredulity. Today, a similar marketing ruse would probably find a Man U supporting nipper necking Yakult so he doesn’t have the ignominy of turning out for Castleton Gabriels in later life.

Indeed after todays game, Accy find themselves in second place but the tightness amongst those below Barnet aiming now for the play-offs is such that previous incumbents of second spot, Crawley Town, managed to drop 5 places in the space of an afternoon. Nonetheless if they keep this kind of performance up, Accy should be in the mixer come May and next season we could well see a very familiar name amongst the 92.

For now, the semi-skimmed is on ice.